Hydrofluoric acid , also called hydrofluoric acid (for naming, see fluorite ), is the aqueous solution of hydrogen fluoride (HF). Hydrofluoric acid is a colorless, pungent smelling, highly toxic liquid. It even attacks glass strongly and has a strong corrosive effect on the skin, the mucous membranes and the conjunctiva of the eyes, whereby even a slight exposure (e.g. through dermal absorption) can quickly lead to death. A solution of 38.2% HF in water forms an azeotropic mixture with a boiling point of 112 ° C. Depending on the concentration, hydrofluoric acid is either stored in plastic or stainless steel containers.

Dried fluorite powder and sulfuric acid are placed in the rotary kiln for reaction . The temperature of the furnace gas phase is regulated to around 280 ° C. The post-reaction gas enters the crude distillation tower to remove most of the sulfuric acid, water and fluorite powder. The temperature of the tower boiler is regulated to 100 to 110 ° C and the head temperature is 35 to 40 ° C. The crude hydrogen fluoride gas is further condensed into a liquid state by a degassing tower, and then enters the rectification tower for rectification . The purified hydrogen fluoride is absorbed by water , so that hydrofluoric acid is obtained. The reaction equation is:

The by-product fluoroanhydrite is used in the building materials industry .

Hydrogen fluoride is in comparison to the other hydrogen halides a weak acid ( pK s = 3.14). Hydrofluoric acid does not attack gold and platinum , but tantalum , silver, copper and lead are weakly attacked. Hydrofluoric acid is the only acid that can dissolve quartz with the formation of silicon tetrafluoride or hexafluoridosilicic acid .

There are numerous uses for hydrofluoric acid in industry and science . Total industrial production in Europe in 2015 was over 230,000 tons. These were manufactured in nine production facilities. Five of them are in Germany.

In research , hydrofluoric acid is, among other things, an etchant for silicon dioxide , titanium , niobium , tantalum or tungsten , e.g. B. in the microstructuring of surfaces. A hydrofluoric acid buffered with ammonium fluoride is often used there in order to better control the course of the etching process. In addition, the ability to dissolve silicates is used in digestion processes in analysis.

In paleontology and pollen customer HF is to expose insensitive fossils or Exinen used.

A 10% aqueous hydrogen fluoride solution is used as a rust remover for textiles .

Hydrofluoric acid is also used for " etching ", the scratching of glass panes , often on public transport facilities (see also scratching ). Serious skin and respiratory injuries can occur if passengers or cleaning staff come into contact with the liquid .

Through popular culture, such as the US television series Breaking Bad, hydrofluoric acid gained additional fame. However, the myth that it can easily decompose corpses has been refuted. 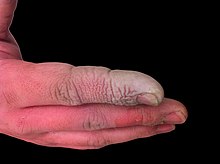 Hydrofluoric acid burns on one hand

Hydrofluoric acid is a strong contact poison . Their danger is increased by the fact that they are immediately absorbed by the skin due to their high lipid solubility . This means that deeper tissue layers and even the bones can be burned without the skin being visibly damaged. By immediately injecting the contaminated tissue with calcium gluconate solution, a deeper penetration can be counteracted to a limited extent.

A palm-sized burn from 40 percent hydrofluoric acid is usually fatal due to absorptive toxic effects. It is particularly tricky that warning pain often only occurs after a delay of several hours. Pain relievers, even opiates and opioids like morphine and fentanyl , are almost ineffective. In the worst case, the limb or a large part of it may have to be amputated due to the lethal effects of hydrofluoric acid .

In addition to the caustic effect, the dangerousness of hydrofluoric acid is due to the fact that the fluoride ions block the calcium and magnesium metabolism and inhibit important enzymes . This leads to acutely threatening metabolic disorders, which can be fatal with multiple organ failure. Hydrofluoric acid also damages the nervous system.

Hydrogen halides and their aqueous solutions