Hydrochloric acid , and hydrochloric acid, called, is a aqueous solution of gaseous hydrogen chloride , in the oxonium - and chloride ions protolyzed is. It is a strong, inorganic acid and is one of the mineral acids . Their salts are called chlorides , the best known is sodium chloride (NaCl, table salt).

Their use is already mentioned indirectly by Pliny , in the separation of gold and silver in mining, when table salt and vitriol form hydrochloric acid at high temperatures, which combine with the silver. It is possible that Georgius Agricola mentions a similar process for separating silver in his De Re Metallica of 1556 (the recipe given would give hydrochloric acid if salt meant table salt). Pseudo-Geber (13th century) described a reaction of mercury after heating with table salt and alum or iron sulfate, whereby fine white needles of mercury chloride were formed by reaction with hydrochloric acid. He and medieval alchemists were also familiar with aqua regia , which was produced by adding salmia (ammonium chloride) or table salt to nitric acid. In the 15th century, hydrochloric acid and its use to soften bones and ivory for carving was mentioned, first in an anonymous mid-15th century Italian manuscript in the University of Bologna, then in a recipe by Caterina Sforza (1490) . It was made by both authors by heating table salt and vitriol and distillation.

In the first half of the 15th century won Basil Valentine hydrochloric acid by reaction of halite (rock salt) with ferrous sulphate . In 1597, Libavius mentions hydrochloric acid in his book Alchemia , but it was also mentioned by Giambattista della Porta (Magiae Naturalis 1558, 1589) as the best means for whitening teeth. Johann Rudolph Glauber succeeded in producing it on a large scale from table salt and sulfuric acid in the 17th century. Lavoisier called hydrochloric acid acid muriatique ( lat. Muria , brine '). Sources containing table salt are still known today as Muriatic springs . In North America, hydrochloric acid is also called muriatic acid .

In nature, hydrochloric acid is found in volcanic gases and strongly diluted in crater lakes. It occurs in free form in the gastric juice of vertebrates (0.1 to 0.5 percent by mass). The deposits of salts of hydrochloric acid, as rock salt and dissolved in sea ​​water, are almost inexhaustible .

Hydrochloric acid is produced in the laboratory from concentrated sulfuric acid and table salt (hence the name):

In the chemical industry, high-purity hydrogen chloride is obtained through the reaction of hydrogen with chlorine :

Here too, the hydrogen chloride is allowed to react with water.

Technically pure hydrochloric acid is mainly a by-product of the chlorination of organic compounds.

Hydrogen chloride gas dissolves very well in water : At 0 ° C, 1 liter of water, if it is still in the liquid phase , dissolves 815 g or 507 liters of gas with the development of heat. At 20 ° C, one liter of saturated hydrochloric acid contains 720 g of HCl. The concentration dependency of the density is shown in the adjacent table, whereby there happens to be a simple mathematical relationship between it and the percentage content of hydrogen chloride: The doubled decimal places roughly correspond to the concentration, e.g. B. a hydrochloric acid with a density of 1.10 g · cm −3 and an HCl content of 20 percent. 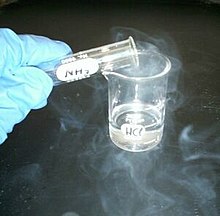 In the reaction of hydrochloric acid with aqueous ammonia solution to form white fumes of ammonium chloride .

Hydrochloric acid dissolves most metals with the exception of precious metals and a few others ( e.g. tantalum and germanium ) with the formation of chlorides and hydrogen , unless these are protected by passivation .

It is very suitable for removing oxide layers from metals, as metal oxides react with hydrochloric acid to form chlorides and water:

Ammonium chloride can be obtained by neutralizing hydrochloric acid with aqueous ammonia solution :

A mixture of hydrochloric acid and nitric acid is called aqua regia because it can also dissolve gold , the "king of metals". In addition to the oxidizing effect of nitrosyl chloride and nascent chlorine, the reduction in the effective gold ion concentration through complex formation also contributes to this:

Hydrochloric acid is an important basic chemical with great importance in the chemical industry as an inorganic acid. It is used, for example, in the processing of ores and raw phosphate . It is used to stimulate petroleum and natural gas probes, especially in carbonate deposits, but also in sandstone deposits. With their help there are also z. B. Calcium carbonate deposits on equipment are removed and cleaning is carried out after drilling with filter gravel (" gravel pack ") and drilling holes themselves. In metal processing, it is used for pickling , etching and soldering . In addition, diluted hydrochloric acid is used in construction to remove mortar residues from masonry - so-called acidification .

Last but not least, hydrochloric acid is an important reagent in chemical analysis . It is able to separate a group of metals, which form poorly soluble chlorides, from other metals by precipitation . These can then be further analyzed separately (see hydrochloric acid group ). The Alkalimetry is another area of use of hydrochloric acid.

As a food additive , hydrochloric acid has the designation E 507.

In the pharmaceutical industry , hydrochloric acid is used to convert basic drugs that are poorly soluble or insoluble in water (examples: ciprofloxacin , citalopram , clenbuterol , clindamycin , dibenzepine ) into more soluble hydrochlorides .

One of the important uses of hydrochloric acid is the pickling of steel to rust or iron oxide scale from iron or steel prior to subsequent processing to remove such. B. by extrusion , rolling , electroplating and other techniques.

A closed acid cycle is created by recovering the used acid . The iron (III) oxide by- product of the regeneration process is valuable and used in a wide variety of secondary industries.

In normal acid-base reactions , hydrochloric acid can be used to produce numerous products that lead to inorganic compounds . These include chemicals for water treatment , such as iron (III) chloride and polyaluminum chloride .

Both iron (III) chloride and polyaluminum chloride are used as flocculants in wastewater treatment , drinking water production and paper production.

In humans and animals, hydrochloric acid is a component of gastric juice , where it causes, among other things, the denaturation of proteins , but also serves to kill microorganisms before they enter the further digestive system. It also creates the acidic environment in which the digestive enzyme pepsin is most effective.

Hydrochloric acid is demonstrated on the one hand by its acidic character. Additionally, one identifies the chloride - anion in very dilute solution (with an excess of chloride ions is a soluble complex forms Dichloroargentat) by addition of silver nitrate solution , wherein the sparingly soluble silver chloride precipitate:

If the resulting white precipitate dissolves in dilute ammonia water to form complexes, then evidence has been provided that it was chloride ions:

Is hydrochloric acid with manganese dioxide ( manganese heated), the result is chlorine :