Nitric acid (HNO 3 ) is the best known and most stable oxygen acid of nitrogen . The acid has been produced on an industrial scale since 1908 using the Ostwald process by catalytic oxidation of ammonia. The ammonia is previously produced from atmospheric nitrogen and hydrogen using the Haber-Bosch process .

As a strong inorganic acid, nitric acid is largely dissociated in aqueous solution and is one of the mineral acids . The pure acid is colorless and has a sharp, pungent odor. It is used, among other things, for the production of fertilizers, dyes and explosives.

In the writing De inventione veritatis from the 12th century it is mentioned that as early as the 9th century the Arab alchemist Geber used raw nitric acid ("Aqua dissolutiva") by dry heating of saltpeter ( Latin sal petrae = rock salt; KNO 3 ), Cyprian Vitriol (CuSO 4 · 5 H 2 O) and alum (KAl (SO 4 ) 2 · 12 H 2 O) are said to have been obtained. In the 13th century, Albertus Magnus is said to have used nitric acid to separate gold and silver (separating water, aqua fortis ). However, many writings were ascribed to Albertus Magnus only in order to give them greater weight, probably including those on the use of nitric acid. Later, saltpetre was heated with iron vitriol (FeSO 4 · 7 H 2 O), which gave higher yields at lower temperatures.

In the middle of the 17th century, JR Glauber obtained pure spiritus nitri by converting and distilling nitric acid with sulfuric acid , a laboratory process that is still used today for the production of nitric acid, which in the Middle Ages was also called aqua fortis or aqua valens and strong water in the English-speaking world . In the middle of the 18th century , AL Lavoisier recognized the chemical elements nitrogen and oxygen as components of nitric acid . The exact composition was determined by Henry Cavendish , who also succeeded in synthesizing it from the nitrogen in the air by electrical discharge .

Efficient manufacturing did not begin until the beginning of the 19th century, when cheap sulfuric acid and Chile nitrate were available in sufficient quantities. The air combustion in an electric arc has become a large-scale processes developed ( Birkeland-Eyde process , according to Kristian Birkeland and Sam Eyde ), which, however, only in countries with cheap electricity was competitive. The catalytic oxidation of ammonia over platinum was discovered by CF Kuhlmann (1838). Until the invention of the ammonia synthesis by Haber and Bosch but ammonia was too expensive compared to Chilesalpeter. At the beginning of the 20th century, Wilhelm Ostwald developed the production of nitric acid from ammonia to industrial maturity. The cheap ammonia oxidation has now replaced all other large-scale processes. 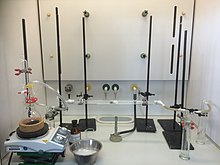 A laboratory setup of the Ostwald process

Nitric acid has been produced technically since 1908 using the Ostwald process. It is the catalytic oxidation of ammonia . The ammonia-air mixture is passed quickly (1/1000 s contact time) through hot platinum - rhodium networks ( catalyst ). At 800 ° C, nitrogen monoxide is formed , which when cooled, reacts with excess oxygen to form nitrogen dioxide and then in trickle towers with water to form around 60% nitric acid. The 60% nitric acid can be concentrated by distillation up to 68%, which corresponds to the azeotrope with a boiling point maximum (122 ° C). Higher concentrations can be achieved by rectification (dehydration) with sulfuric acid (H 2 SO 4 ) or with aqueous magnesium nitrate solution (Mg (NO 3 ) 2 ) or by treating nitrous tetroxide (N 2 O 4 ) with the stoichiometrically required amount of oxygen ( or air) and water.

On a laboratory scale, nitric acid can be produced by reacting concentrated sulfuric acid with nitrates . Before 1908, nitric acid was obtained by this process using sodium nitrate ( Chile's nitrate ).

Frequently occurring contamination of the acid with halogens or hydrogen halides can be removed by adding silver nitrate and subsequent distillation. Anhydrous nitric acid is obtained, starting from an acid highly concentrated by distillation, by passing through inert gas or by distillation over phosphorus pentoxide or oleum .

Nitric acid is colorless in its pure state. Concentrated nitric acid, however, decomposes easily (especially when exposed to light) and often has a yellowish or reddish hue due to the nitrogen dioxide (NO 2 ) dissolved in it .

Nitric acid is both a strong oxidizer and a strong acid . Non-metallic elements such as carbon , iodine , phosphorus and sulfur are oxidized by concentrated nitric acid to their oxides or oxo acids with the formation of nitrogen dioxide , for example

In addition, many compounds are oxidized by nitric acid. Hydrochloric acid is oxidized to chlorine and chlorine dioxide.

Nitrates , the salts of nitric acid, result when metals or their oxides , hydroxides or carbonates react with nitric acid. Most nitrates are water soluble, and nitric acid is mainly used to make soluble metal nitrates.

Nitric acid reacts with most metals to form water-soluble nitrates. Exceptions are the precious metals gold , platinum and iridium . Also, aluminum , titanium , zirconium , hafnium , niobium , tantalum and tungsten withstand the nitric acid passivation . Furthermore, as a result of passivation , iron is resistant to cold, and chromium is also resistant to hot nitric acid. A tightly adhering, impermeable oxide layer forms on the metal. Since gold and silver could be separated in this way, it was previously called separating water . Mixtures of nitric acid with hydrochloric acid ( aqua regia ) or selenic acid also react with gold and platinum.

Nitric acid is one of the most important raw materials in the chemical industry. She serves:

Like nitrates, nitric acid can be detected in the laboratory using the ring test and Lunge's reagent .

Nitric acid is corrosive to the skin, respiratory tract and mucous membranes. Inhaling the vapors can cause toxic pulmonary edema . This danger exists especially when heating or when using the concentrated acid. In high concentrations it is a strong oxidizing agent and has an oxidizing effect. Nitric acid reacts with most metals to form toxic nitrogen dioxide . When working with nitric acid, protective goggles or a face shield, suitable protective gloves and a closed work coat must be worn. If there is a risk of nitric acid vapors or nitrogen oxides being released in a room, a breathing apparatus must be worn. For this reason, nitric acid is not suitable for household cleaning purposes. Work in the laboratory is always done in a fume cupboard. A Teflon cap is recommended for bottles with concentrated nitric acid.