Sodium nitrate (also sodium nitrate or Chile nitrate ), NaNO 3 , is the sodium salt of nitric acid . The chemical compound is in the pure state in the form of a hygroscopic , i.e. water-attracting, white substance or colorless crystals .

Sodium nitrate has a wide range of uses as a nitrogen fertilizer and in food preservation and, to a lesser extent, in the manufacture of glass or enamel . It is also used for pyrotechnic products or solid propellants for rocket drives - albeit only to a limited extent, because although sodium nitrate is similar in its molecular structure to potassium nitrate , which is still frequently used today , its hygroscopic property significantly limits its use for pyrotechnics , primarily due to the reduced shelf life and stability because of.

In 1736, Duhamel synthesized sodium nitrate for the first time . The first shipments of Chiles nitrate reached England in the 1820s. Over time, consumption increased and in 1859 England was importing 47,000 tons. As early as 1870 , 147,000 tons of Chiles nitrate were shipped from Iquique , a port city in northern Chile, to Liverpool and Hamburg .

The increasing profitability of saltpeter exports finally led to the saltpeter war between 1879 and 1884 , also known as the Pacific War, between Chile on the one hand and Peru and Bolivia on the other, around the areas of Región de Arica y Parinacota , Región de Tarapacá and Región de Atacama , in what is now northern Chile, where the most abundant deposits of Chile nitrate were to be found. With the invention of the Haber-Bosch process and the associated production of synthetic sodium nitrate, the extraction of Chile nitrate from the Chilean deposits steadily lost its importance.

Sodium nitrate is the most important naturally occurring nitrate . As a mineral , it occurs as nitronatrite . The main place of discovery is Chile , hence the common name Chilesalpeter . The deposits in the Atacama Desert are the remains of deposited bird droppings ( guano ), the organic parts of which are weathered. There are other natural occurrences in Egypt , Asia Minor , Colombia and California . 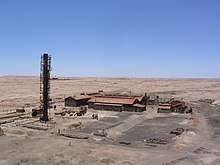 Natural deposits are extracted by leaching with hot brines and cleaned of foreign matter by filtration . The sodium nitrate that crystallizes out in the cold is about 98% pure. The iodate contained in the mother liquor goes into iodine production .

Sodium nitrate can also be obtained by reacting sodium carbonate with nitric acid:

Here the absorption of residual gases from ammonia oxidation in concentrated sodium carbonate solution is recommended:

To oxidize the nitrite , it is acidified with nitric acid, oxidized to nitrate in the air and neutralized with sodium carbonate. It is concentrated to a solid in a vacuum evaporator .

Sodium nitrate can also be obtained by reacting sodium hydroxide with nitric acid:

In hot sulfuric acid , it is converted into sodium hydrogen sulfate with the formation of nitric acid :

At temperatures above 380 ° C it decomposes to sodium nitrite :

At temperatures above 800 ° C to sodium oxide :

Sodium nitrate is used as a fertilizer , in the building materials industry as a cement additive, as an additive in chemical drain cleaners , as a latent heat store and as a preservative for curing meat and sausage products (see curing salt ). It is also used as a raw material for the production of potassium nitrate .

Curing salt consists of table salt to which small amounts of sodium nitrate E 251, sodium nitrite E 250, potassium nitrite E 249 and / or potassium nitrate E 252 have been added. The nitrates themselves do not have an antibacterial effect. In the curing process, however, they are enzymatically converted into nitrites , which are effective against bacteria , especially the botulism pathogen Clostridium botulinum . During this process, the chemically poorly resistant muscle dye myoglobin is converted into a more stable variant (reddening). As a result, the meat retains its red color. Uncured meat and sausage products take on a gray color soon after slaughter, and curing also makes old meat products look fresh. In addition, a typical aroma is developed during curing.

Nitrates themselves are harmless. Their use is problematic because they are converted into nitrites . This transformation is possible in food , but also in the human body . Nitrites, in turn, have a vasodilator effect and lower blood pressure . In higher doses they can lead to acute symptoms of intoxication ( methaemoglobin formation). Nitrite can be converted into highly carcinogenic nitrosamines in the human body when meat or milk protein is consumed at the same time .