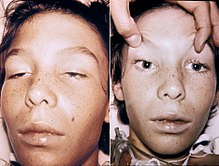 Botulism (from Latin botulus “sausage”), also called meat poisoning , sausage poisoning or allantiasis (from Greek ἀλλᾶς “sausage”), is a life-threatening poisoning caused by botulinum toxin (also known as botulism toxin). This toxin is produced by the bacterium Clostridium botulinum , which was found to be the cause in ham remains in 1896 by the bacteriologist Emile van Ermengem . Most of the poisoning, characterized by paralysis of the eye muscles and bulbar centers (see Bulbar Brain Syndrome ), is caused by spoiled meat (including fish and sausage) or vegetables that have not been properly cooked . In food production , the growth of the bacteria is prevented by curing or heat sterilization .

A distinction is made between the disease in humans and in cattle. The incubation time (outbreak time after infection) is usually 12 to 36 hours in humans, but it can also be shorter or longer, i.e. H. between two hours and 14 days. 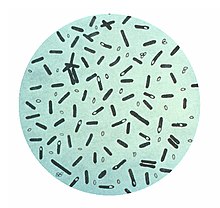 Clostridium botulinum and its spores are widespread in the environment and extremely resistant to heat, frost and drying out. They can survive for a very long time in the ground. Under anaerobic conditions, they germinate and release the poison botulinum toxin, one of the most dangerous poisons. Strictly speaking, botulinum toxin is a collective term, because there are traditionally seven botulinum neurotoxins (A, B, C, D, E, F and G), some of which are host-specific and have different levels of toxicity. The type C2 also described is a protein which is toxic but not neurotoxic. Cattle are mainly affected by types C and D, less often by type B, which occurs primarily in plant material (incorrectly fermented silages ). Types A, B, E and F are toxic to humans.

Like all Clostridia, Clostridium botulinum only grows anaerobically , i. H. under exclusion of air. It reproduces rapidly in animal carcasses, rarely also in plant material containing protein (e.g. legumes contaminated with earth in inadequately heated tins). If animal carcasses z. B. in hay or silage, the feed is contaminated with botulinum toxins.

Botulism and, in some cases, suspected botulism in humans in the DA-CH region (in Germany according to Section 6 of the Infection Protection Act , in Austria as bacterial food poisoning according to Section 1 (1) Epidemic Act 1950 and in Switzerland according to Annex 1 , No. 5 of the FDHA Ordinance on Reporting Observations of Communicable Diseases in Humans and in Australia , Belgium and France , Hong Kong , Malaysia , the United Kingdom and the USA ). Botulism in animals , however, has not yet been reported.

In adults, botulism is usually pure poisoning and is therefore not contagious. The cause is usually the consumption of spoiled food, mostly from canned food ( mason jar or tin can ), in which the anaerobic botulinum bacteria multiplied and produced botulinum toxin. Food cans are then bloated in most cases . However, there are also known cases in which babies in particular have ingested spores of the botulinum bacterium with honey , which were first activated in the intestine , where they multiplied and thus led to poisoning. The oral intake of the in nature z. Bacterial spores occurring in honey, for example, rarely lead to an infection with subsequent symptoms of intoxication in sensitive people and infants.

The disease was first described in detail by the poet and Weinsberg medical officer Justinus Kerner in 1820. The poisonous effect is based on the blockade of signal transmission between nerves and muscles . The release of acetylcholine is inhibited. The eye muscles are usually affected first, the patient has blurred and / or double vision, the eyes keep closing and the pupils are dilated. As the disease progresses, the muscles of the lips, tongue, palate and larynx are affected; the mouth is very dry (resulting in thirst), and speech and swallowing disorders . The affected person typically does not have a fever . In severe cases, the paralysis spreads from the head down to the muscles of the internal organs , leading to vomiting , diarrhea , later constipation and abdominal cramps, finally due to paralysis of the heart and respiratory muscles to death due to suffocation or cardiac arrest .

Due to the rarity of the disease and the multitude of seemingly unrelated symptoms, there are often problems with differential diagnosis .

The treatment aims to remove the poison that has not yet been absorbed from the digestive tract , alleviate the symptoms and - through the administration of antidotes - inactivate the botulinum toxin of types A, B, E and F, which are freely circulating in the blood, depending on the toxin (Types A, B, E) and a polyvalent antiserum (types A – G) are available, both of which are obtained from horses. The introduction of the antidote reduced botulism mortality from over 90 percent to 10 to 15 percent. The symptoms of paralysis of the muscles disappear very slowly, often only after months. In the USA, serotypes A – G can be treated with the Heptavalent Botulism Antitoxin .

In contrast to poisoning, there is visceral botulism, which occurs as “infant botulism” or “infantile botulism” in infants and as “adult infectious botulism” in adults with a rare predisposition to be an infection. It occurs predominantly in infants and is relatively common in the United States with 1,442 cases from 1976 to 1996. In infants, ubiquitous spores are ingested through food and are not rendered harmless due to the lack of stomach acid . The spores germinate and form botulinum toxins in the small intestine. The symptoms of poisoning described above occur.

Spores of some bacteria can be ingested by bees and survive in honey. In a study in Germany, baby food and honey from Germany and Vietnam were examined. “Eight (including 6 baby food and 2 honey samples) out of 46 samples bought in Germany contained C. botulinum spores. All infant milk powder samples were negative, while 4 of the 9 grain food samples , one of 8 mashed potatoes and one of 7 vegetable food samples were positive for type B. "(See also the article on honey )

If there is a suspicion of contamination from canned food that has been stored for a long time, the poison can be rendered harmless by heating it to 80 ° C for six minutes. When heated to 100 ° C, the process of rendering harmless only takes a few seconds. It should be noted that the temperature information always refers to the core temperature . As a preventive measure, foods can also be protected against the formation of the poison by acidifying (pH <4.5), salting, curing , sterilizing at at least 121 ° C and storing at temperatures up to 5 ° C.

The consumption of contaminated feed can lead to severe poisoning. There are three types of progression:

So far, only dairy cows have fallen ill, but this may be due to the very slow course of the disease. Clinical symptoms only develop after about three years. According to the Federal Institute for Risk Assessment (2004), these are persistent digestive disorders with alternating constipation and diarrhea, frequent abomasum displacements, rumen solidification, progressive emaciation and becoming stuck until death. Other symptoms mentioned are: Non-infectious claw and joint diseases, coordination disorders up to loss of coordination, paralysis, impaired consciousness with behavioral disorders and drowsiness. Also noticeable are a tense, drawn-up abdominal wall as well as swallowing disorders and difficult water absorption in the advanced stage. Acute febrile udder infections are often found.

According to previous observations, the disease rate is very high at 30–40% of the animals in the affected herd. In addition, a gradual decline in performance leads to sensitive economic damage that can endanger the company's existence.

Vaccination of cattle herds can only be carried out on the basis of an exemption. The problem is that this clinical picture is not a reportable disease and the excrement of sick animals can be freely applied to the fields. It is known that this can produce toxic substances that are dangerous for humans and animals. For this reason, veterinarians, farmers and researchers are calling for research into this danger. The Ministry of Consumer Protection has so far rejected measures that have also been called for by the Land ministers of agriculture.

This form generally ends fatally. Initially, the tongue and lower jaw are affected by paralysis that begins on the head. The tongue hangs out of the mouth, the animal has chewing and swallowing problems and excessive salivation. Later on, the paralysis spreads to the entire body muscles. The animal shows general weakness, lying down, and paralysis of the tail. The symptoms are very reminiscent of milk fever . Sometimes even before these symptoms develop, death suddenly occurs due to respiratory arrest, dehydration or complications from being stuck.

This form is slower and less violent. The animals lie down a lot, find it difficult to get up, but continue to eat for a relatively long time. Only gradually do paralysis show up. Swallowing disorders cause food and water to leak out of the mouth and nose. In the further course it can lead to sporadic healing as well as creeping emaciation and infirmity. The cause of this course form can be a lower amount of toxin absorbed or other toxin types.

This form was only described in Germany in 2001 and is still largely unexplored. The clinical picture is not scientifically proven. There is a thesis under discussion, according to which it is a disease caused by colonization of the gastrointestinal tract with Clostridium botulinum and there by botulinum toxin formed by the pathogen. However, causes such as hygienic deficiencies, poor keeping and feeding or a combination of various factors cannot be ruled out.

A risk of infection for humans is being investigated. Clinically ill animals must not be slaughtered for human consumption, otherwise there is a risk to food safety . The risk of overlooking such a conspicuous clinical picture is classified as low. Compliance with the regulation is the responsibility of the slaughterhouse and is officially monitored. Milk may also only be given to the consumer from healthy animals.

It is reported that, according to studies from the USA, type B botulinum toxin can accumulate, especially in protein-rich, incorrectly fermented silages with a pH value> 4.5. On the other hand, botulinum toxin of type C occurs when feeding silages in which carcasses of dead animals have been processed. In California, for example, 420 cattle died within a week because a cat carcass was located in the TMR ( total mixed ration ). According to statements from the Federal Institute for Risk Assessment 2004, poisoning can also originate from pasture areas that are covered with poultry litter, a sawdust, poultry droppings and isolated cadavers of z. B. day-old chicks existing mixture, were fertilized.

No specific therapy is known for botulism. Although antitoxins and reliable vaccines for cattle of type C and D are produced in South Africa, they are not permitted in Germany or their use requires a special permit. It is also often too late for treatment with antitoxins. There is no commercially available vaccine against type B.

The prevention of botulism requires hygienic feed production. Farm manure and silage must not contain any animal carcasses. Grassland areas must be mowed from the inside out, so that any animals in them are pushed out. Stables, pastures, drinking troughs and feed stores must be monitored for the occurrence of animal carcasses. Rats and mice must be fought professionally (poison and traps). Pastures should not be fertilized with poultry manure or droppings.

A reliable protection against botulism can be achieved through active immunization (vaccination). This is shown on the one hand by the experience in Israel , where due to frequent diseases of entire cattle herds, a compulsory vaccination has even been introduced. In Germany, mink farms routinely carry out annual vaccinations against botulism. In Germany, however, no vaccine is currently approved for use on cattle.