It has the status of its own union territory and is also the capital of the two Indian states of Punjab and Haryana , on the border of which it lies. The planned city of Chandigarh was built after the partition of India according to plans by the Swiss-French architect Le Corbusier as the new capital of the Indian part of Punjab.

According to the 2011 census, the city of Chandigarh has around 960,000 inhabitants, and just under 1.05 million people live in the entire Union territory. Together with the two satellite cities Panchkula and Sahibzada Ajit Singh Nagar (formerly Mohali ), Chandigarh forms a metropolitan area with over 1.4 million inhabitants, the so-called "Chandigarh Tricity". The main languages ​​are Hindi and Punjabi .

Chandigarh is located in northwest India at the foot of the Siwaliks , the foothills of the Himalayas , at an altitude of 321 meters. The Union Territory of Chandigarh covers an area of ​​114 square kilometers. It is enclosed in the west by the state of Punjab ( Sahibzada Ajit Singh Nagar district ) and in the east by the state of Haryana ( Panchkula district ). The border with the state of Himachal Pradesh is only around 25 kilometers away. The nearest major cities are Ambala 50 kilometers south, Ludhiana 100 kilometers west and Shimla 125 kilometers northeast. After Delhi , there are around 260 kilometers.

Chandigarh has a subtropical to continental climate with a seasonal change due to the monsoons . 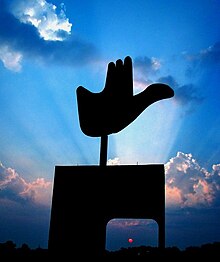 Chandigarh is a planned city that was only founded in the middle of the 20th century. In the summer of 1947, India and Pakistan were given independence from the British colonial empire , which was linked to a new demarcation between the two states (see partition of India ). The Punjab province was also divided, with the capital Lahore falling to Pakistan. India then decided to build a new seat of government for the Indian part of Punjab. The site chosen was an area in the immediate vicinity of the village of Chandigarh, whose name was carried over to the new city. The name is derived from the goddess Chandi , who is dedicated to a nearby temple ( garh means "fortress").

The American urban planner Albert Mayer and his partner, the architect Matthew Nowicki , were hired to build a new capital . After Nowicki had a fatal accident in 1950, Mayer also left the planning. At the special request of Jawaharlal Nehrus , the Prime Minister of India, the Swiss architect Le Corbusier succeeded in planning . The foundation stone for Chandigarh was laid in 1952.

In 1966, the Hindi- speaking part of Punjab was split off as a separate state of Haryana . Chandigarh, located on the border between the Punjab and Haryana, was designated the joint capital of the Punjab and Haryana and, as a union territory, was directly subordinate to the Indian central government.

According to the 2011 Indian census, the city of Chandigarh has 960,787 inhabitants. The Union Territory of Chandigarh, which extends only a little beyond the administrative boundaries of the city, has 1,055,450 people (all following figures refer to the entire Union territory). The population density of Chandigarh is high with 9,258 inhabitants per square kilometer, but typical for a large Indian city (for comparison: Mumbai approx. 28,500 people / km² , Delhi approx. 11,300 people / km² , Berlin approx. 3,900 people / km² ). The gender ratio is extremely unbalanced: for every 1,000 men there are only 818 women (the average for India is 943). The surplus of men can only partly be explained by the (mostly male) labor migration to the city of Chandigarh: Even among the up to 6-year-olds there are only 880 girls for every 1,000 boys (total India: 919). 86 percent of Chandigarh's residents can read and write. The literacy rate is thus well above the Indian average of 73 percent, but only slightly above the average of 84 percent for the urban population.

The Chandigarh agglomeration has a population of 1,054,686 according to the 2011 census. It should be noted, however, that the Indian census does not register agglomerations across state borders. In fact, Chandigarh forms with the directly adjacent cities Sahibzada Ajit Singh Nagar (formerly Mohali ) and Panchkula , which are part of the Punjab or Haryana, a unified metropolitan area known as "Chandigarh Tricity" ( Tri-City analogous to twin cities ). The Chandigarh-Mohali-Panchkula agglomeration has a combined population of over 1.4 million.

Since its inception, Chandigarh has seen tremendous population growth. In 1951 there were only about 24,000 people in the Chandigarh area. Within the next ten years the population quintupled to 120,000; by 1971 it doubled again to just under 260,000. Since then the population growth has continued unabated: in 1981 Chandigarh had approx. 450,000 inhabitants, in 1991 it was 640,000, in 2001 then 900,000 and in 2011 Chandigarh had over a million inhabitants for the first time. Nevertheless, the growth curve has flattened significantly: most recently, population growth was only 17 percent within ten years. One reason for this is that the already densely populated Chandigarh offers less and less space for further growth. According to Le Corbusier's plans, the city was intended for only 500,000 inhabitants.

The states of Punjab and Haryana, on whose border the common capital Chandigarh lies, were founded after the language border between Punjabi and Hindi . Therefore, both languages ​​are spoken in Chandigarh. According to the 2001 census, Hindi speakers make up the majority with 68 percent, while Punjabi speakers make up a minority of 28 percent. The remaining four percent come from other languages. As in all of India, English is widely used as an educational and lingua franca.

In Chandigarh, Hindi dominates everyday life and administration, which sometimes causes displeasure among the Punjabi speakers. In 2010, the parliament of the state of Punjab passed a resolution in which it deplored the neglect of Punjabi in Chandigarh and called for Punjabi to be made the “first language” of Chandigarh. 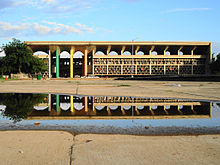 The courthouse designed by Le Corbusier

Chandigarh is divided into sectors, while Le Corbusier breaks up the urban functions into segregated zones. People either live, sell or work in these. So is z. B. Sector 17 the purchasing sector, sector 35 the catering and restaurant sector. At the same time, every residential sector has basic facilities such as a school, market or local doctors.

Chandigarhs train station is eight kilometers outside the city. The strict division of functions within the city makes Chandigarh the city of long distances. In contrast to many other Indian cities, which suffer from daily traffic chaos and high population density, Le Corbusier has avoided such bottlenecks in the urban infrastructure through generous planning. Architecturally, Chandigarh is very noticeable in several ways. Most of the residential buildings were designed by Le Corbusier's cousin Pierre Jeanneret , British architect Maxwell Fry and his wife Jane Drew, and Indian architects such as MN Sharma and Aditya Prakash . The different residential buildings, some with protective grilles and transenners ( Jalis ) on the facades, which provide shade and ventilation in the hot, humid summers, give the city its own flair. However, many buildings have already been changed several times.

Le Corbusier's monumental government buildings in the Capitol complex in Chandigarh make the city a place of pilgrimage for architects. The exposed concrete structures are located in sector 1, the “head” of the city. Originally, Le Corbusier planned four government buildings: the Palace of Justice, the Parliament, the Ministry building and the Governor's Palace. However, the latter was not implemented. Next to the artificial plateau on which the government buildings stand is the 250-meter-long secretariat building (ministries), also a design by Le Corbusier. Seen from a distance, the structures are still impressive, but the concrete is already showing strong signs of dissolution. In honor of Le Corbusier, the floor plan of a quarter is shown on the Swiss 10- franc note dedicated to him (8th series from 1995 to 2016).

A special kind of attraction is the 10 hectare garden art project " Rock Garden ", designed by Nek Chand since the mid-1960s as a kind of counter-world to the modern planned city of Le Corbusier.

Chandigarh is the headquarters of SML Isuzu .

Individual transport has a high priority in Chandigarh. Compared to other Indian cities, car traffic in Chandigarh benefits from the spacious traffic areas. Local public transport, on the other hand, is underdeveloped. The state-owned Chandigarh Transport Undertaking (CTU) operates bus connections within Chandigarh and to neighboring states. It has a fleet of over 500 buses that carry 217,000 passengers a day. Bicycle or auto rickshaws are an important addition to local public transport.

The construction of a subway is planned. The Chandigarh Metro is to receive two lines with a total length of 38 kilometers (14 kilometers of which are underground) and will go into operation by 2018.

There are train connections from Chandigarh Station to Delhi , Mumbai , Calcutta , Indore , Amritsar and Jaipur, among others . The Shatabdi Express runs to Delhi . Chandigarh also has its own airport, Chandigarh Airport . There are flight connections to various cities in India.