Pierre Jeanneret was for many years a partner of his famous (second degree) cousin Le Corbusier ( Charles Edouard Jeanneret ). They founded a joint architecture office in Paris in 1923 , and Jeanneret was involved in many of the projects designed in this office that were important for the development of modern architecture.

The joint office was closed in 1940. In the 1950s they worked together again on a project to build the Indian city ​​of Chandigarh . Pierre Jeanneret accompanied the project for 15 years until shortly before his death. 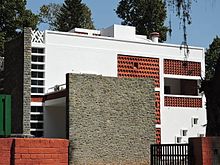 In his home in Chandigarh there is now a museum.