Tripura ( Bengali : ত্রিপুরা Tripurā ) is an Indian state with an area of ​​10,492 km² and about 3.7 million inhabitants (2011 census). The capital of Tripura is Agartala, the national languages ​​are Bengali and Kokborok .

Tripura borders the states of Assam (northeast) and Mizoram as well as Bangladesh .

Tripura has one of the highest literacy rates in India: 87.8 percent of the population can read and write (92.2 percent men, 83.2 percent women). This value is the third highest of all Indian states after Kerala and Mizoram and is well above the overall Indian average of 74.0 percent (as of the 2011 census).

Around two thirds of the population of Tripura are Bengali . The rest is divided among various indigenous peoples, mostly as " tribal peoples " ( tribals are called). The Indian 2001 census classified 31.1 percent of the population of the State as members of the tribal population ( scheduled tribes ).

The official languages ​​in Tripura are Bengali and Kokborok. As everywhere in India, English is present as a communication and educational language.

The vast majority of Tripura's population are Hindus . According to the 2011 census, they make up 83 percent of the state's population. Hinduism is practiced by both Bengalis and members of the tribal people. A minority of almost 9 percent profess Islam , mainly Bengal. There are also minorities of Christians (4 percent) and Buddhists (3 percent) among the tribal population . Most of the Christians are Baptists and to a lesser extent Catholics . The Mog, Chakma and Barua tribes who originally immigrated from Burma practice Theravada Buddhism.

Flag of the Principality of Tripura

Tripura was a princely state between Bengal and Assam in British India . According to legend, the principality existed since 100 AD and was never subjugated by the Mughals , but in 1733 it lost to them the lower-lying areas with Comilla (Tippera district). These came to the British East India Company in 1760 . The British referred to the remaining principality as Hill Tippera. The Raja kept large estates in the Tippera, Noakhali and Sylhet districts . Tripura was a British protectorate from 1871 to 1947 . The full title of the ruler was from 1739 Bisam-Samar-Bijojee Mahamopadhyaya Pancha-Srijukta Maharaj; the British recognized the Maharaja title in 1919.

After Great Britain gave India its independence in 1947 (see History of India ), Tripura first became independent. The Maharani Kanchan Prabha Devi, who had ruled for her underage son Kirit Vikrama Manikya since 1947, joined India on October 15, 1949. Under the Indian Constitution of January 26, 1950, Tripura became a Category C state, ruled by a chief commissioner appointed by the central government. On July 1, 1963, Tripura became a centrally administered Union territory because of its strategic location on the border with East Pakistan and only on January 21, 1972 a federal state with full rights.

Economically and politically , the increasing rapprochement between India and Bangladesh that has taken place since 2008 under the government of the Bangladeshi Prime Minister Hasina Wajed is of importance for Tripura . By the beginning of 2019, Tripura near Agartala is to have a connection to the Bangladesh rail network , so that the state would then have direct access to the overseas port of Chittagong .

The inhabitants of Tripura take part in the events in the neighboring country, to which they feel linguistically and culturally connected. One expression of this were the celebrations for the 97th birthday of the first Prime Minister of Bangladesh, Bangabandhu Sheikh Mujibur Rahmans on March 18, 2016 in Tripura. 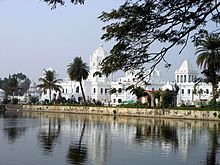 The Ujjayanta Palace is the seat of the Parliament of Tripura.

Campaigning for the CPI (M) in Agartala

The legislature of the state of Tripura consists of a unicameral parliament , the Tripura Legislative Assembly or Tripura Vidhan Sabha . The 60 members of parliament are elected by direct election every five years . The parliament has its seat in the Ujjayanta Palace , the former palace of the Maharajas of Tripura, in Agartala . Tripura has two members in the Lok Sabha , the lower house of the Indian parliament, and one in the Rajya Sabha , the Indian upper house.

The Chief Minister of Tripura is elected by Parliament. But is appointed by the President of India Governor (at the head of the State Governor ). Its main tasks are to appoint the Chief Minister and to entrust him with the formation of the government.

The highest court in Tripura has been the Tripura High Court , based in Agartala , since 2012 . Prior to 2012, Tripura was in the jurisdiction of the Gauhati High Court .

Along with West Bengal and Kerala, Tripura was one of the communist strongholds of India for a long time . State politics were dominated by the Left Front , made up of two communist parties, Communist Party of India (Marxist) (CPI (M)) and Communist Party of India (CPI). The CPI (M) has been the government of Tripura since 1993. In the February 2013 election, the CPI (M) won 49 out of 60 constituencies. The CPI was successful in one constituency. The opposition Congress Party (INC) entered parliament with ten members. As a result of the election, Chief Minister Manik Sarkar (CPI (M)) , who had been in office since March 11, 1998, was confirmed in office.

The election on February 18, 2018, on the other hand, marked a veritable turning point for the state. The Communist Left Front, which had been in power for almost 24 years, was voted out of office. The Bharatiya Janata Party (BJP), which until a few years ago hardly played a role in Tripura - in the last election it did not win a single one of the 60 constituencies - won 35 of 59 constituencies and thus the absolute majority of the seats. The Indigenous People's Front of Tripura (IPFT), allied with the BJP, won 8 constituencies. The previously ruling CPI (M) had 16 seats and the Congress party did not win a single constituency. On March 9, 2018, Biplab Kumar Deb was sworn in as the new Chief Minister of Tripura.

The CPI (M) was successful in the last five Lok Sabha elections in Tripura: since 1996 it has won both constituencies of the state in all elections. 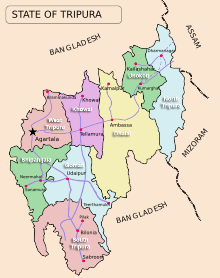 The districts of Tripura

Tripura is divided into the following eight districts (population and population density according to the 2011 census):