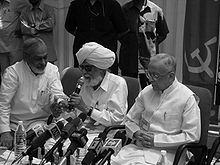 A CPM campaign vehicle in Ernakulam (2004)

In the parliamentary elections in 2014, she got 9 seats in the Lok Sabha , the lower house, and lost seven seats compared to the 2009 elections (16 seats).

When the Indian communists split into two factions at a party congress in 1964, mainly due to internal party disputes about the position on the Indo-Chinese border war in 1962, the later CPI (M) made the wing that was more based on the Chinese model, while the CPI followed Moscow's guidelines - the explicitly Maoist forces split off from the CPI (M) in 1967-69 and founded various organizations known under the collective term Naxalites . At least since the end of the Cold War , the collapse of the Soviet Union and the market economy reforms in the People's Republic of China , the ideological differences have lost their significance. Since the late 1990s there has been repeated talk of a possible overcoming of the communist split in the near future.

By far the most prominent representative of the party was Jyoti Basu , who was Chief Minister of West Bengal for more than 23 years and was unsuccessfully proposed for the office of Indian Prime Minister by the parties of the victorious United Front coalition after the parliamentary elections in India in 1996 . From 1977 to 2011, the Left Front ruled in West Bengal without interruption under the leadership of the Marxists - a rare phenomenon given the short-lived nature of many state governments in India. The CPI (M) and its partners succeeded in significantly advancing the agricultural reform in West Bengal and in installing social security systems. The policy under Basu and his successor in the office of West Bengal Prime Minister Buddhadeb Bhattacharya , which was oriented towards the needs of the broad masses of the people, had given the party a permanently high potential for support. In the small state of Tripura, the alliance led by the Marxists also ruled for several legislative periods until it came to an end in 2018, and in Kerala the left-wing front has effectively alternated with the Congress party as the winner in elections since the 1970s .

In spring 2005 there was a generation change in leadership at the party congress . After Harkishan Singh Surjeet's resignation from the office of General Secretary due to health problems , the delegates elected Prakash Karat as his successor. In previous years, he had already appeared as an important member of the management team.

Since April 19, Sitaram Yechury has been the party's general secretary.

The following table shows the election results (seats won and share of votes) in the all-India parliamentary elections.