Mizoram is an Indian state with an area of ​​21,087 km² and around 1.1 million inhabitants (census). The capital of Mizoram is Aizawl and the main language is Mizo .

Mizoram is part of the " Seven Sister States ", which lie in a geographical triangle between Bangladesh , Myanmar and the People's Republic of China on the eastern edge of the Indian subcontinent. It borders the states of Tripura (northwest), Assam (north) and Manipur , as well as Myanmar to the east and Bangladesh to the west.

According to the 2011 census, Mizoram has 1,091,014 inhabitants. In terms of population, Mizoram is the second smallest state in India after Sikkim . The population density of 52 inhabitants per square kilometer is far below the overall Indian average of 382 inhabitants per square kilometer. The population density among the states of India is even lower only in Arunachal Pradesh . The population is mainly concentrated in the cities: Of all Indian states, Mizoram has the second highest urbanization rate after Goa with 51.5 percent . On average, however, only 31.2 percent of all Indians live in cities. With a literacy rate of 91.6 percent, Mizoram has the highest rate in India after Kerala . The national average, on the other hand, is only 74.0 percent (as of the 2011 census).

The population of Mizorams consists mainly of the Mizos people, who are divided into different tribes. The largest of the tribes are the Lushai , who make up about two-thirds of the total population of the state. Other important Mizos tribes are the Ralte , the Hmar , the Paihte , the Poi, the Mara and the Pawi . The Riang , a sub-tribe of the Tripuri , and the Chakma , who descended from the Arakanese , are non-Mizo peoples who live in Mizoram.

According to the 2011 census, 87 percent of Mizoram's population are Christian . 8.5 percent are Buddhists . Hindus (2.7 percent) and Muslims (1.4 percent) make up only small minorities.

In addition to the neighboring states of Nagaland and Meghalaya , Mizoram is one of three states in India with a Christian majority. The Presbyterian and Baptist creeds predominate . Almost all members of the Mizo majority people and other Tibetan Burmese ethnic groups (Mara, Hmar, Paite, Pawi, Khasi and Garo) profess Christianity. The majority of the Chakma (almost 92 percent Buddhists and 7 percent Christians), on the other hand, practice Theravada Buddhism, which combines with Hindu and animist elements. Hinduism (Riang, Kokbarak, Bengalis, Hindis) and Islam (Bengalis) are common among the population who immigrated from the rest of India.

For several decades, a group of members of the Chin , Kuki and Mizo have identified themselves as Jews. The Jewish faith is practiced by around 6,000 more people in India, around 1,000 of them in Mizoram. A few hundred officially converted to the Orthodox Jewish faith and emigrated to Israel in November 2006 . The majority do not regard themselves as converts, but as ethnic Jews - descendants of the lost biblical tribe of Israel Manasseh . The term Bnei Menashe has established itself as a foreign name .

The Lushai expedition to Mizoram in an illustration in the Illustrated London News 1889.

Due to the remoteness of the relatively inaccessible mountain region, Mizoram remained outside the focus of world politics for a long time and the population lived in small tribal communities without forming larger state associations. From the 18th century, the British East India Company established itself in nearby Bengal and continued to expand inland from there. Because of the raids of the warlike tribes of Mizorams into the lower plains, which took place at irregular intervals, conflicts arose with the British colonial power. The British responded with several punitive retaliatory actions in which tribal settlements were burned to the ground and their prisoners were freed. Major such actions were the Lushai Expedition 1871-72, the Military Action 1888-89 and the Chin Lushai Expedition 1889-90. After the latter, the Mizo tribes completely submitted. From 1895 the area officially belonged to British India and became part of the Assam Province. From the second half of the 19th century, especially from the 1890s, Christian missionaries came to the country, who in a few years converted a large part of the population who had previously adhered to animist religions to Christianity . After India gained independence in 1947, the area became part of the state of Assam . In 1959 there was the so-called Mautam famine and a political movement, the Mizo National Famine Front (from 1961 Mizo National Front , MNF), which sought Mizoram's autonomy or even complete independence from India. In March 1966 there was an armed uprising by the MNF, which was suppressed. The MNF was banned as a political organization in 1967. In response to the dissatisfaction and aspirations for autonomy in the entire Northeast of India , the government of Prime Minister Indira Gandhi rearranged the territorial situation in Assam in 1971/72. Mizoram was spun off from Assam with effect from January 21, 1972 and converted into a Union territory . However, this was not enough for the MNF and the armed resistance continued. Under the government of Prime Minister Rajiv Gandhi , after lengthy negotiations, an agreement ( Mizoram Accord ) was concluded with the leaders of the MNF on June 30, 1986 , which ended the armed resistance. Mizoram received the status of an Indian state on February 20, 1987 the following year. The re-admitted MNF turned into a political party, took part in elections and has been the governments and chief ministers of Mizoram for the longest time ever since . 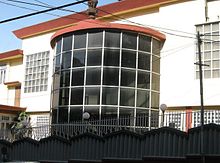 The legislature of the state of Mizoram consists of a unicameral parliament , the Mizoram Legislative Assembly . The 40 members of parliament are elected by direct election every five years . The seat of parliament is Aizawl . The Mizoram State Chief Minister is elected by Parliament. But is appointed by the President of India Governor (at the head of the State Governor ). Its main tasks are to appoint the Chief Minister and to entrust him with the formation of the government. The highest court responsible for Mizoram is the Gauhati High Court , located in Guwahati . A branch is located in Aizawl.

In the all- Indian parliament , Mizoram is represented by one member each in the Lok Sabha , the lower house, and the Rajya Sabha , the upper house.

Mizoram's party policy is shaped by the national congress party (INC) on the one hand and the Mizoram Democratic Alliance (MDA), an alliance of regional parties led by the Mizo National Front (MNF), on the other. In the last parliamentary election in December 2013, the ruling Congress party won a landslide and won 34 out of 40 constituencies, while the opposition MDA only won six seats in parliament. Five of these went to the MNF and one to the Mizoram People’s Conference (MPC), while the third ally, the Maraland Democratic Front (MDF), missed out on parliament. As a result of the election, Congress politician Lalthanhawla was confirmed as Chief Minister. He has held office since December 11, 2008. In the all-India parliamentary election in 2014 , the congress party in Mizoram defied the extremely bad trend across the country and won the Mizoram constituency.

Zoramthanga has been Chief Minister in Mizoram from the Mizo National Front since December 15, 2018 .

The eight districts in Mizoram

The state of Mizoram is divided into the following eight districts (population and population density according to the 2011 census): 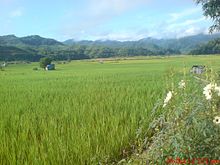 Rice field in the Serchhip district

Mizoram's economy is still relatively strongly influenced by agriculture. In the years 2013-14, around 60 percent of the population lived from agriculture and related economic sectors. However, the primary sector contributed only about 16% of the state's gross domestic product during this period, 26% was contributed by industry and 58% by the tertiary sector . This is one of the reasons why the Mizoram government has been pursuing a policy of targeted increases in efficiency in agriculture for several years ( New Land Use Policy , NLUP). According to the government, economically and ecologically sustainable, profitable agriculture is to be promoted. The old slash and burn economy ( Jhum ) is to be given up. The cultivation of wet rice , oil palm cultivation , milk production, fish breeding, silkworm breeding , etc. are promoted. The aim is to diversify agriculture. The main fruits grown in 2014–15 (annual, estimated): 145,000 t of bananas, 94,000 t of citrus fruits, 37,000 t of papaya , 37,000 t of pineapple, 25,000 grapes, and in smaller quantities (less than 2,000 to 5,000 t) of mango , passion fruit , jackfruit , Lychee , strawberries and guavas . The main vegetables produced (2014–15, annual, estimated): chayote 82,000 t, cabbage 49,000 t, bitter melon 26,000 t, okra 25,000 t, aubergine 17,000 t, onions 12,000 t and beans 6,000 t. The most important aromatic plants were turmeric (25,000 t) and ginger (31,000 t). Mizoram's economic growth rate was around 9% (the absolute figures vary depending on the source) annually in the years 2004 to 2014, above the already relatively high overall Indian average. The average per capita income also grew strongly, but was below the Indian average.