Climates of the earth according to heat balance / continentality: Annual fluctuations in monthly average temperatures:

The continental climate (land climate) is the term used to describe the temperature profile of various types of climate outside the tropics , which are characterized by large seasonal temperature fluctuations above 20 ° C in the monthly average temperatures.

The further you get into the interior of a continent, the less the balancing influence of the oceans, which represent an enormous heat store due to the high specific heat capacity of the water , while the heat capacity of the ground is decoupled from the surface due to the thermal resistance and lack of mixing. At the same time, both the number of clouds and the moisture content of the atmosphere drop sharply. Continentality describes the size that indicates the extent to which a region has presented typical features of a continental climate. There are several suggestions for indexing or quantifying them in terms of degrees of continentality . 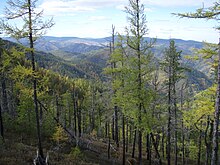 In the mountains on the way from the sea to the interior of the continent, the wind speed drops , the clouds are also forced to rise and can no longer hold as much water vapor due to the subsequent cooling . Due to its vast extent and the highly indented landscape, Asia has a share in several climatic zones , but mostly in the continental climate. Between the extreme summers and winters there are - often only short - seasons of transition. The daily contrasts in temperature are also great . The cold pole is in northeast Siberia (both Oymyakon and Verkhoyansk ), but winters in Central Asia are also cold because of the low cloudiness and nocturnal radiation. Where the great deserts extend far to the north, the greatest temperature differences are likely to occur during the day and year. In contrast, South and Southeast Asia are under the influence of the monsoons , which cause a cycle of wet and dry seasons. The trigger are the cold winter land masses of North Asia, where pronounced high pressure areas can develop.

Due to the comparatively small land masses of the southern hemisphere (with the exception of the Antarctic continent ), only narrow strips of a weak continental climate can be found in South America and South Africa according to the definition of Siegmund and Frankenberg .