The terms digestive tract or digestive canal ( Latin Canalis alimentarius ) are used to summarize the organs that are used to take in, chop up and transport food in order to digest it and make the nutrients it contains usable for the body. The digestive tract consists of the oral cavity , the pharynx (throat), the esophagus , the stomach and the intestines .

In the digestive tract, the actual enzymatic digestion of food, the absorption of food and water and the elimination of indigestible or non-usable food components take place. In addition to enzymes, various microorganisms are also involved in digestion , which are summarized under the term intestinal flora .

The large digestive glands, the liver - with gall bladder - and the pancreas produce digestive juices that break down food into its components. The lower part of the digestive tract is mainly used for the absorption of water and the elimination of indigestible food components. 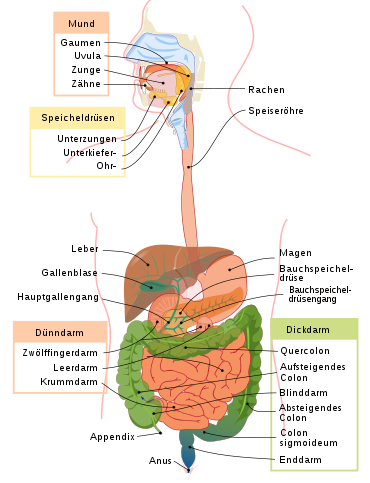 Overview of the human digestive tract

The mouthparts and oral cavity ( lips , teeth , tongue ) are used for food intake and for crushing. The salivary glands produce saliva , which makes food slippery and in some mammals also contains enzymes to break down starch ( amylase ). The pharynx (pharynx, head) is the transition to the esophagus. In it, food and airways cross .

Differentiation of the digestive systems

Through evolution, the digestive tract is optimally adapted to the respective food of the species . On the one hand it affects the anatomy of the digestive tract and on the other hand the environment of the nutrient-splitting microorganisms. Here is an overview of the common digestive systems:

The wall of the digestive tract basically consists of four tissues in all sections, which are in layers on top of each other. In the different sections of the gastrointestinal tract, the structure differs slightly depending on the function.

The layers from the inside out: