This article deals with the oral organ tongue , further meanings under tongue (disambiguation) . 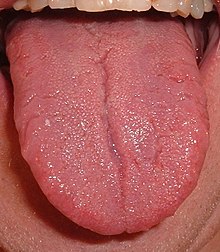 Tongue of man. The picture shows a special finding, namely a tongue of folds ( lingua plicata ) .

The tongue ( Old High German  Zunga , Latin lingua , ancient Greek γλῶσσα GLOSSA (ionic γλάσσα glassa , Attic γλῶττα glotta )) is an elongated, of mucous membrane coated muscular body (consisting of nine individual muscles ) in humans and most other vertebrates , which on the ground of Oral cavity and almost completely fills it with closed jaws .

It participates in chewing , sucking and swallowing and is endowed with sensory organs for tasting and touching . The human tongue is also an important part of language formation , from which the term linguistics is derived.

In the middle line of the tongue is a kind of vertical septum, the septum linguae . Otherwise, however, the tongue consists mainly of muscle fibers with numerous nerves and blood vessels running between them . The muscle fibers are arranged in all three spatial directions and thus enable the tongue to be extremely mobile. 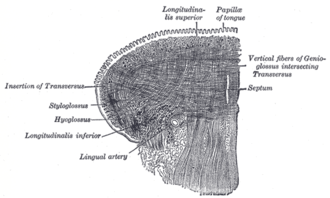 Frontal plane of the tongue with the striated internal muscles . 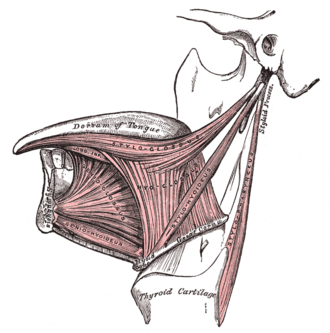 Lateral view of the tongue with the correspondingly freely prepared muscles.

The inner tongue muscles (abbreviation M. corresponds to muscle ) include:

Shortening and widening the tongue, lifting the tip of the tongue:

and the external muscles of the tongue include:

Pull the tongue forward and down ( ventro - caudal ):

Pull the tongue back and down ( dorso- caudal):

Pull the tongue back and down (dorso-caudal):

Narrowing of the throat ( isthmus faucium ): 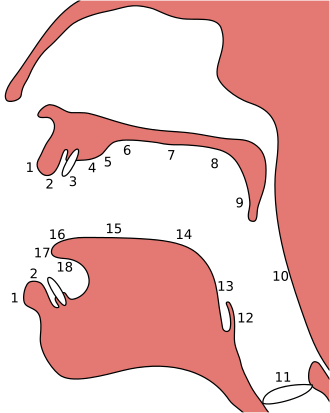 The tongue is innervated by several nerves in a very complex way : 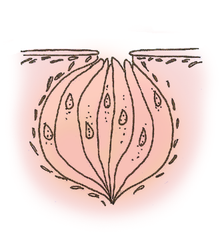 Drawing of a taste bud 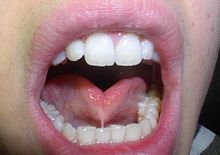 Shortened ligament of tongue with tying of the tongue tip

On the very thick mucous membrane of the tongue , which is a continuation of the oral mucosa, there are numerous papillae ( papillae linguales ), which are thread-like, club-like or flat. Functionally, they can be divided into two groups.

The mechanical papillae (papillae mechanicae) are divided according to their shape into papillae filiformes (thread-like), papillae conicae (conical) and papillae lentiformes (lenticular). The thread-like papillae give the tongue its velvety surface. In some mammals ( cattle , sheep , cats ) they have small horn tips pointing towards the throat and give the tongue a certain roughness. Conical papillae are significantly thicker and occur on the tongue of cattle, for example. Lenticular papillae are flat and wide and can be found in ruminants . They are primarily used to record tactile sensations .

The second group of tongue papillae are the taste papillae (papillae gustatoriae) with the actual taste organs, the taste buds , which are connected to the taste nerves ( nervus glossopharyngeus , chorda tympani ). According to the shape, there are three types of taste papillae. The mushroom-shaped papillae ( papillae fungiformes ) are probably also involved in tactile and temperature sensations in addition to the absorption of taste stimuli. The wall papillae (papillae vallatae) at the base of the tongue are raised and surrounded by a moat with irrigation glands. Their number is very different depending on the animal species: horses have only two wall papillae, ruminants 48. Leaf papillae (papillae foliatae) are not formed in all mammals. They are particularly evident in horses. Here on both sides an approximately 2 cm long papillae on the side of the base of the tongue. It consists of many leaflets standing behind one another.

The tongue contains numerous small salivary glands , especially around the base of the tongue. The entire surface of the tongue is covered by a delicate cuticle or epithelium. A biofilm develops in the numerous depressions between the papillae, which is nourished by saliva and food residues, forms a whitish coating on the upper side of the tongue and can be temporarily reduced, for example, with a tongue cleaner .

Task of the tongue

The tongue is used to move the food in the mouth so that it can be chewed through and salivated through . To do this, she pushes the food between her teeth in cooperation with her cheeks while chewing. After all, it takes on an important role in the act of swallowing by pushing the food from the mouth into the throat. With a mushy consistency, this is achieved by first pressing the edges of the tongue and then the middle area of ​​the tongue from front to back against the palate.

The tongue is essential when speaking . Many speech sounds , but also whistles , cannot be produced without a tongue.

It is also the organ that makes it possible to taste . A distinction is made between the taste qualities of sweet, sour, bitter , salty and umami ( 旨 味 ; from Japanese 旨 い umai , German , 'meaty and hearty' , 'tasty'; sodium glutamate ). According to recent research, there is also a receptor that reacts to fat.

The different receptors are represented differently in certain areas of the tongue. The sensory cells are mainly at the edge, sweetly heaped at the top, then salty, sour, salty. Bitter taste accumulates on the tongue background. For decades it was believed that the tongue could be divided into a few fixed taste areas. This model ultimately turned out to be inadequate and could be traced back to an interpretation error in the illustration of a publication published by David Hänig in 1901.

In addition, the tongue performs the task of “self-cleaning” the teeth on their lingual and palatal surfaces, the mouth and the lips.

Tongue of a horse 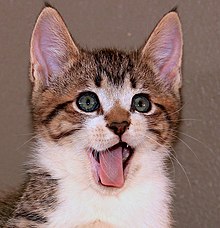 Tongue of a cat

In vertebrates , the tongue is generally present. In fish it consists only in the coating of the hyoid bone, which is often covered with teeth; in amphibians it is often thick, attached in front, but with its two-lobed rear part it is movable and can be stretched out; in reptiles it is often narrow, horny, and can jump out of a special sheath, but it is also broad and firm; It behaves similarly in birds, while in mammals it mostly comes close to that of humans. In some primates and marsupials there is a keratinized, muscle-less lower tongue under the tongue .

In dogs and cats there is a lengthwise connective tissue strand in the base of the tongue, which is referred to as "rabid" (Lyssa) . In the past, this was mistakenly associated with rabies disease.

In the hunter's language , Lecker describes the tongue of the hoofed game . In fish, a cartilaginous structure between the palate and the first spinal vertebra used to be called the tongue.

After the tongue was previously regarded as the main speaking organ , in antiquity and in the Middle Ages contradiction, slander , libel , betrayal , perjury , blasphemy and other acts committed by speaking were punished in a form of mirror punishment by mutilation , cutting off or tearing out the tongue. Mild forms were piercing or scorching the tongue.

A tongue that is congenitally too large is called macroglossia , and microglossia that is too small .

Malformations such as forked tongue and hamartomas occur in orofazio-digital syndromes .

Inflammation of the tongue is known as glossitis .

Under dysgeusia (Dysgeusien) dysgeusia (Gustatorik) are meant. They can be caused by various diseases, but also by medication.

In diagnostics, pathological changes in the tongue can allow conclusions to be drawn about the presence of diseases.

On July 19, 2003, a team of doctors from the Vienna General Hospital transplanted a human tongue for the first time worldwide.

Under tongue rolling the inherited ability of most of the human population is understood to roll the tongue tube-like by high curvature of the lateral edges.

In the mid-1990s, tongue piercing established itself in youth and pop culture, whereby the tongue is pierced in order to wear jewelry in it permanently. Another variant is the tongue lanyard piercing . The temporary piercing of the tongue was already common in religious rituals in Thailand as part of the festival of the nine imperial gods or Thaipusam .

A rarer form of body modification was the splitting of the tongue , whereby, as part of a medical procedure, the front part of the tongue is incised from the tip towards the root of the tongue in such a way that two tongue tips are created similar to a snake tongue.

Tongue as a food

The tongues of beef , veal , lamb and pork are prepared individually or processed into sausage . In some places, tongues of game , for example that of the reindeer , are also eaten. In ancient Rome, the tongues of some songbirds were considered a delicacy.