Sheep graze in a meadow in spring

The sheep ( Ovis ) are a genus of mammals belonging to the goat-like group (Caprini). They include twenty species that can be divided into several more closely related groups. This also includes the wild sheep from which the domestic sheep emerged.

Sheep reach a body length of 1.2 to 1.8 meters, plus a tail 7 to 15 centimeters long. The shoulder height is 65 to 125 centimeters and the weight 20 to 200 kilograms - the males are always significantly heavier than the females. The color of the coat varies from whitish to dark brown, and the coat changes frequently . The males often have a mane on their necks, but unlike the goats, they have no goatee. Both sexes can have horns, but those of the females are significantly smaller. In some domestic sheep breeds, both sexes have no horns or only the males have horns. The horns of the males turn in a spiral with age and can be over 1 meter long. Sheep have two halves of the udder , each with a teat , whereby their position can vary. When feeding triplets, there is not enough teat available. In individual cases, sheep can also be born with an additional teat.

Visually, sheep can be distinguished from goats not only by the male's missing goatee but also by their long, hanging tail. Goats, on the other hand, raise their tails.

As ruminants, sheep have 32 teeth in their permanent set of teeth, of which three incisors (incisors, I), one canine (C), three front molars (premolars, P) and three rear molars (molars, M) per lower jaw half; this results in the tooth formula 3I-1C-3P-3M per half of the jaw. The incisors and canines are missing in the upper jaw, so that the formula 0I-0C-3P-3M per half of the jaw results here.

Sheep reach an age of ten to twelve, up to a maximum of 20 years.

Wild sheep are found today in western, central and northeastern Asia as well as western North America . In southeastern Europe ( Balkan Peninsula ), wild sheep died out around 3000 years ago. Whether the mouflon populations on some Mediterranean islands are real wild sheep or wild indigenous domestic sheep is a matter of dispute. Most sheep are mountain dwellers, but there are also animals that live in deserts, such as populations of bighorn sheep .

Sheep are mainly diurnal, but sometimes they rest during the hottest hours of the day and also graze at night. The females form small groups with the young, which sometimes join together to form larger groups. The males live separated from the females for most of the year, either solitary or in groups of males. They form a strict hierarchy - often due to the size of the horn or fought out through fights.

They are herbivores that feed primarily on grasses.

The mating season usually falls in autumn, after a gestation period of around five to six months, one to four young are born in spring. Single births are common for North American sheep and multiple births for Asian sheep. The young animals are weaned after several months and sexually mature after one to seven years.

Domestic sheep are among the oldest pets at all. The first domestic sheep and goats are dated to around 8000 BC. Dated in the " Fertile Crescent ". Trophy hunting and competition between domestic animals endanger wild species. The IUCN lists the wild sheep as endangered ( vulnerable ) and the giant wild sheep as low endangered ( near threatened ).

Since a ram (also known as Ram called), the male members of the genus Ovis ( Aries, Stähr ) can make in one day about fifty copulations, he was (like the goat) in many Indo-European cultures as a symbol of fertility and the embodiment of a Fertility deity. This idea still lives on today in the Scandinavian Yule goat .

The bucks are strong and defensive animals. The saying with your head through the wall indicates this. The twisted horns can seriously injure people. If a strange buck intrudes into the herd, the duel can sometimes be fatal. 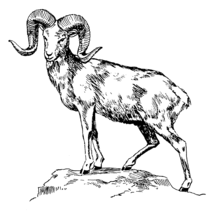 Drawing of an argali ( Ovis ammon )

The sheep are classified within the hornbeams (Bovidae) in the goat-like subfamily (Caprinae). Contrary to previous assumptions, they should not be closely related to goats .

The number of species is controversial. Grubb (2005) originally only differentiated five species into two groups; a 2011 revision of the hornbeams by Colin Peter Groves and Grubb identified a total of 20 species:

The strong division of the sheep was mainly due to the division of the wild sheep and Uriale (originally Ovis orientalis ) into eight and the Argalis (originally Ovis ammon ) into nine species. In particular, the Ovis orientalis species, once called wild sheep, turned out to be problematic because it was based on a hybrid form ; the scientific species name is no longer available today. The snow sheep, the dall sheep and the bighorn sheep are partially assigned to the subgenus Pachyceros , all other representatives to the subgenus Ovis . The blue sheep and the dwarf blue sheep (genus Pseudois ) do not belong to the genus of sheep .

The types of sheep sometimes differ in terms of the chromosome set. The Argali has 56 chromosomes in the diploid chromosome set , while most of the other sheep only have 54.

Wild sheep of the genus Ovis were found in Europe during the Ice Age, but are relatively rare in the fossil record. They were described under the names Ovis antiqua and Ovis savini from the Middle Pleistocene of Europe. In the Late Pleistocene, which began about 125,000 years ago, wild sheep are relatively common in Italy and North Africa. A find from this time is also known from the Franconian Jura in Germany.