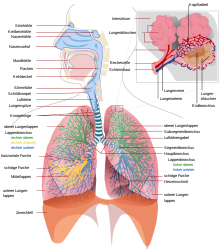 Belong to the respiratory system

The bronchial system occupies a special position in that it makes up the largest part of the air-conducting pathways in terms of area, but - with the exception of the main bronchi - it is embedded in the lungs as a "bronchial tree" (progressive bronchial branching). The hollow organs leading into the alveolar space have three tasks, namely to filter particles as precipitation, to warm and humidify the breathing air.

The volume of air that is in the airways is also referred to as the dead space within the total volume of inhalation and exhalation, as it is only through the movement of air (mixing, swirling) that it also participates in the gas exchange in the alveoli.

In humans, the system of the lungs already forms in the three-week-old embryo as a protuberance of the foregut and thus comes from the inner cotyledon ( endoderm ). In the 5th week of pregnancy, this sac ("lung diverticulum") is completely separated from the foregut by a septum ( septum oesophagotracheal ), an open connection then only exists in the area of ​​the later larynx. Simultaneously with the constriction of the foregut, which develops in its rear part to the esophagus , the system of the respiratory tract grows backwards. The middle section becomes the windpipe, which then divides into the two lung buds at the end.

The lung buds divide into three branches on the right and two on the left - the appendages of the later lobe bronchi , which subsequently continue to divide dichotomously . About 17 such divisions take place by the end of the sixth month of pregnancy, the other 6 divisions take place only after the birth . The mesoderm surrounding the bronchial tree develops into cartilage , smooth muscle cells, and blood vessels .

The pulmonary systems growing into the body cavity ( coelom ) push the mesoderm layer that covers them in front of them. From this layer the "lung membrane", the visceral pleura, develops .

The alveoli form at the end branches of the pulmonary system in the 7th month of pregnancy, whereby the cells of the alveolar epithelium attach themselves directly to the epithelium of the neighboring capillaries in order to ensure the subsequent problem-free exchange of gas . In addition to the alveolar cells , so-called niche cells are also formed , which produce surfactant , a surface-active substance, and thus prevent the alveoli from collapsing after birth. A lack of surfactant production leads to what is known as the syndrome of hyaline membranes in premature babies without treatment .

The alveoli are filled with amniotic fluid until birth . During birth, this is partly pressed out of the alveoli, the rest is absorbed in the following hours, so that all alveoli are ventilated by the third day of life at the latest.