The epithelium [ epitel ] ( Greek ἐπί epi on ',' on 'and thele "mother's breast," "nipple") is a biological collective term for cover fabric and gland ngewebe. These are single or multi- layer cell layers that cover all inner and outer body surfaces of the multicellular organisms (exception: joint capsules and bursa of the musculoskeletal system).

In addition to muscle , nerve and connective tissue, the epithelium is one of the four basic types of tissue .

Epithelia are clearly separated from the connective tissue by the basement membrane and contain no blood vessels .

Another characteristic common to all epithelial cells is their polarity :

The cells are close together and are rich in cell contacts . As a result, the tissue has only small intercellular spaces with correspondingly little intercellular substance . With the help of emperipolesis , other cells penetrate the epithelia.

Classification of the epithelia

The different types of epithelium. In curved single-layer high prismatic and cubic epithelia, a certain percentage of cell shapes appear, which are called scutoid .

Another illustration for the classification of the epithelial tissue (English labeling)

Epithelia are specifically differentiated in many ways and depending on the organ. First of all, one can distinguish between surface epithelia and glandular epithelia:

To distinguish between the numerous epithelial types, it has proven useful to emphasize two features: on the one hand, the number of cell layers and, on the other hand, the shape of the cells in the superficial cell layer (see below).

The multi-row epithelium is also still single-layered, all cells are anchored to the basal lamina as in the single-layer epithelium , but not all of them reach the lumen . Highly prismatic cells fulfill the actual function, while small basal cells are available as a reserve for submerged cells. The cell nuclei are at different heights and thus form apparent layers (rows).

In the multilayered epithelium, many (more than ten) layers of cells lie on top of one another. Basically, a three-way division can be made: Cell divisions take place in the basal layer, which is anchored to the basal lamina. The cells ascend and differentiate in a specific way in a middle or intermediate layer. Eventually they reach the surface or superficial layer.

The transitional epithelium ("urothelium") is a special epithelium of the urinary tract ( renal pelvis , ureter , urinary bladder ) that has multiple rows or layers, depending on the bladder filling (or stretching of the urothelium) . The deck / umbrella cells are particularly important here. They form the so-called crusta , which has the task of protecting uric acid. In contrast to the squamous epithelium, the upper cell layer is more cubic.

Functions of the epithelia

The epithelium basically fulfills two different protective functions: On the one hand, purely mechanical protection, primarily through the multilayered epithelia. The epidermis of the skin must have sufficient tear resistance and must not detach from the connective tissue underneath. On the other hand, the epithelium must seal the inner body orifices: stomach and intestinal contents must be used in a controlled manner (highly prismatic epithelium), the urine must remain in the bladder and ureter (transitional epithelium ), the blood-brain barrier must be preserved (capillary endothelium). Of course, mechanical loads have to be withstood here as well, but the tight junctions that occur more frequently in such cells are decisive for the seal .

Resorption is the transport of precisely defined substances from apical to basal. The classic example is the absorption of nutrients in the intestinal mucosa. The apical surfaces are often differentiated, for example, an epithelia cell can enlarge its surface through the formation of numerous microplicae (folds) or microvilli . The exact mechanisms ( transport , phagocytosis , pinocytosis , lysosomes ) are the subject of other articles. 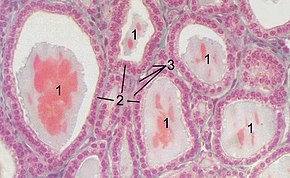 Histological image of the thyroid gland of a horse: follicle with colloid (1), follicular epithelial cells (2), endothelial cells of the capillaries (3)

All secretion processes of the body take place from the glandular epithelia. Accordingly, there is a great variety here, from the individual goblet cells of the intestinal mucous membrane to the sweat glands of the skin to entire organs such as the salivary glands or the pancreas . Glands are organs made up of specialized epithelial cells; they are used for secretion. One differentiates:

One can also distinguish between the secretion route, that is

the latter being divided into, according to the composition of the secretion

Most of the human sensory cells are embedded in epithelial cell structures. This construction is recommended because epithelia, as superficial cell layers, naturally assume a mediating position between inside and outside. Examples:

Some epithelia also have cilia on their surface, which have a transport function. They can smuggle foreign bodies out of the organism with their powerful blow.