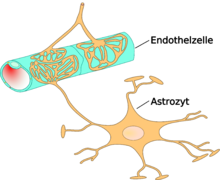 As endothelium ( lat. Endothelium ) refers to the the vessel lumen directed towards the cells of the innermost wall layer of lymphatic and blood vessels ( tunica intima ). Regardless of their structure, which varies depending on the type of vessel, all vessels in the cardiovascular system are lined with a single-cell layer of endothelial cells.

The total weight of all endothelial cells of an average person is 1 kilogram, the number of endothelial cells in a human body is a good 10 trillion and the surface area that comes into contact with the blood is 4000 to 7000 m². This alone shows the importance of the endothelial system for the entire organism .

The back epithelium of the cornea is also often referred to as the corneal endothelium .

The endothelium consists of endothelial cells that form a single-layer squamous epithelium that sits on a basal lamina .

The endothelium is more than a mere coating of the vessel wall and is involved in a multitude of different physiological processes:

Endothelial cells produce a factor that is important for the activation of fibrinolysis , the tissue plasminogen activator (tPA). This factor activates the formation of plasmin from plasminogen through hydrolytic cleavage and thus modulates the thrombus dissolution in the organism. It also prevents menstrual blood from clotting.

The continuous endothelium is by the formation of tight junctions in a first approximation impermeable to dissolved substances in the blood. (One example is the endothelium of the blood-brain barrier .) The exchange of substances between tissue and blood, which is nevertheless necessary , is strictly controlled by highly selective transport mechanisms.

The fenestrated endothelium is considerably more permeable: Even larger molecules pass through the “window” (lat. Fenestra ) in the endothelium without any problems. These windows are about 70 nm in diameter  and - in humans with one exception, the kidneys  - always have diaphragms (imaginable as spokes), which again somewhat restrict the permeability of very large molecules and cells . This type of endothelium has a continuous basement membrane and occurs in the kidney glomerulus , in the intestine and in endocrine glands .

The discontinuous endothelium is very permeable; it can even happen to cells. Some of the endothelial cells are not in contact with each other, which results in large "holes" in the endothelial wall. In addition, the basement membrane is partially or completely non-existent. (An example is the endothelium of the liver .)