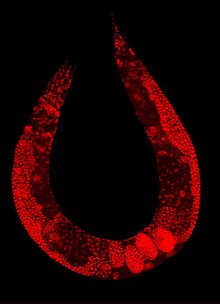 Multicellular organisms include the majority of animals (Animalia), plants (Plantae) and fungi (Fungi). These were compared by Ernst Mayr as metabionta with the unicellular protists and bacteria (at that time still the archaea with comprehensive, according to the more modern term prokaryotes ). These two groups, however, only form organizational levels and not related groups ( clades ), since multicellularity has arisen several times independently of each other and some prostists are more closely related to animals, plants or fungi than they are to each other. In addition, there are transitional forms to multicellularity in various groups of algae , protozoa , fungi and partly also in bacteria (bacteria).

Comparative representation of the diversity of cells in differently organized organisms in an explanatory model for the evolutionary development of multicellular organisms: above solitary choanoflagellates , in the middle colony-forming choanoflagellates, below sponges

In addition to the clearly identifiable single and multicellular cells, there are still various transitional forms. In some species, transitions from single to multicellularity can also be observed depending on environmental conditions:

Biochemical and molecular requirements of multicellularity

The prerequisites for multicellularity - they are reflected down to the molecular level - result from the solution of specific problems. So the problem of the communication of the interconnected cell or tissue associations has to be solved, the direct cell-cell communication, the cell differentiation, the most different cell types have to be coordinated and formed from undifferentiated progenitor cells. The cell adhesion , the cells of the individual tissues and organs of the organism have to adhere to one another in a certain way so that they can develop a shape.

Intercellular recognition processes are one of the fundamental processes in the development of multicellular organisms. But they are also of great importance for the maintenance of tissues and for regeneration processes in adult organisms. Part of these morphoregulatory processes is the membrane-dependent conversion of intercellular recognition into signal processes . Thus, the cell hikes , such as from somites into the limb systems, the differentiation of cells, such as the polarization of epithelial cells, and (in specific cell context, the fate of cells stem cell development) influences.

While unicellular organisms reproduce through simple cell division , most multicellular organisms have more complex reproductive strategies. In particular, in addition to the somatic cells that build up the functional organism (somatic cells), they often have specialized cells that serve to produce the next generation (generative cells). These can be formed sexually ( sex cells ) or asexually .