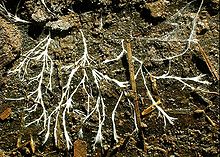 Hyphae strands, so-called rhizomorphs , made up of many parallel hyphae

Hyphen (from Greek Ὑφή , tissue ') are branched, row threads of fungi and streptomycetes , by septa cell-like manner can be divided. The entire fungus of hyphae fungi consists of them: the mycelium , the fruiting bodies and the fungal part of the mycorrhizae of the tree fungi . Some normally unicellular yeasts such as B. Saccharomyces cerevisiae can also develop hyphae under certain conditions. The hyphae can be divided into sections by partitions that cross the hyphae. These walls are called septa .

Generative hyphae
Generative hyphae are relatively undifferentiated and can form reproductive structures. They are usually thin-walled and translucent and more or less often septate. Also buckles may occur. Occasionally the hyphae are bound into a gelatinous matrix.

Skeletal hyphae
Skeletal hyphae are thick-walled, not or only slightly branched and mostly buckleless and hardly septate hyphae, which are often very long. The hyphae usually die off very early and are then plasma-free and tubular-hollow. These hyphae give the fruiting body hardness and strength. Fruiting bodies with skeletal hyphae are more or less corky or woody.