Cell membrane ( anatom. Membrana cellularis ), cytomembrane , plasma membrane , also called plasmalemma , is the name given to each living cell's own biomembrane , which surrounds the cell interior and maintains its inner milieu.

Schematic representation of a cell membrane.

The cell membrane of eukaryotic cells and bacteria consists of a two-layer layer of lipids ( lipid bilayer ) and various membrane proteins that are embedded in it peripherally, integrally or transmembrane. The hydrophilic , water-soluble poles of the lipid bilayer form the inner and outer cell membrane surface, whereas the hydrophobic , water-repellent poles of the lipid bilayer are directed towards the membrane center. Depending on the size, the solubility of fat and the charge of certain substances, the cell membrane is permeable to different degrees or poorly, so it is semipermeable. With a thickness of around six to ten nanometers , it can only be vaguely imagined as a line under the light microscope . The cell membrane separates the cytoplasmic space of a cell from the extracellular space and represents the interface through which an exchange of substances with the environment takes place.

In addition, the cell membrane takes on essential tasks in cell-cell contacts , cell-matrix connections , signal transmission , cell migration and changes in cell shape . In prokaryotes , it is also the site of photosynthesis or the chemotrophic provision of energy and arrangement surface for photosystems , respiratory chain complexes and other enzyme systems . The external, extracellular side of the cell membrane is also structurally different in all cells from the internal, intracellular side of the membrane. The plasma membrane can be surrounded on the outside by a cell wall as a protective covering. Inwardly, it can be connected to proteins of a cytoskeleton or, in some unicellular organisms, stiffened to form a pellicle .

Organization of the cell membrane

The cell membrane initially consists of a large number of different membranogenic lipids in two facing layers, which together form a lipid bilayer; only in some archaea is it formed as a lipid monolayer . Their main components are phospholipids , mostly various phosphoglycerides - these include lecithins as phosphatidylcholines (PC) and cephalins as phosphatidylethanolamines (PE) or as phosphatidylserines (PS) as well as phosphatidylinositols (PI). In addition to sphingomyelin , other essential membrane components are also other sphingolipids and also sterols such as cholesterol . The non- steroidal lipid components differ, apart from their head group, for example in the degree of saturation and the chain length of bound fatty acid residues . In addition, they may have been modified with carbohydrate residues to form glycolipids .

As the outermost layer of the human cell surface, antenna-shaped sugar chains of glycoproteins and glycolipids of the cell membrane - and possibly those of the extracellular matrix - form a carbohydrate-rich shell, the so-called glycocalyx . As the first barrier, this protects the cell from mechanical and chemical effects, mediates cell-cell interactions and prevents unwanted protein-protein contacts with other cells.

The lipid composition is different with respect to the intracellular / cytosolic side and the extracellular side of the cytomembrane. This oriented organization is brought about by selective phospholipid translocators , called flippases or floppases . In the course of apoptosis , this orientation is reversed and serves as a signal for the surrounding cells.

Sphingolipids and cholesterol can form domains within the cell membrane, the so-called lipid rafts . Lipid rafts are selectively enriched in certain membrane proteins according to their transmembrane domains and play a role in the clustering of membrane proteins, for example in the course of a signal cascade . There is currently (2015) no consensus on the typical size and lifespan of lipid rafts.

With the cell membrane, the cell delimits its own space, in which other environmental conditions are possible than in the surrounding area. According to the fluid mosaic model, different membrane proteins that are important for external contacts lie in the membrane or “swim” . As receptor proteins on the outside, they absorb stimuli or receive signals; as membrane-spanning proteins, they allow transport through the membrane or anchor the cell in the environment or connect it to other cells.

Many of the outwardly directed peripheral proteins and some of the membrane lipids often carry short-chain, sometimes tree-like branched carbohydrate compounds and are therefore also referred to as glycoproteins or glycolipids . Overall, these surface structures form the glycocalyx , which ensures stability in addition to the cytoskeleton in cells without a cell wall . A cell can be recognized by immune cells , for example, by means of characteristic structures, also known as surface antigens - or, conversely, they can identify themselves in this way.

The cell membrane can also bind molecules, molecular complexes or larger particles from the environment in a special way. Furthermore, deformations of the cell membrane can be brought about, such as indentations. If certain protein-lipid interactions result in the invagination and constriction of cell membrane sections, areas of the surrounding medium are enclosed and absorbed, which is called endocytosis . A distinction is made here according to the enclosed content between the phagocytosis of solid substances or other organisms and the pinocytosis of amounts of liquid, or according to the volume between food vacuoles and the smaller vesicles .

Exocytosis is the name given to processes in the opposite direction, in which the membrane of vesicles fuses with the cytomembrane, and the vesicle contents are thus discharged into the surrounding extracellular space. In eukaryotic cells, the formation of vesicles is also possible through constriction of inner membranes from cavities in the endoplasmic reticulum and the Golgi apparatus . In constitutive exocytosis , vesicles of this type are not used to secrete specific vesicle contents, but to expand or remodel the cell membrane and incorporate membrane proteins.

As changes in the shape of the cell, regions of the cell membrane can also be bulged or, continued, turned forward as a cell process, supported by a framework of microtubules of the cytoskeleton, for example as a cilia . In contrast to these, the microvilli are special formations of animal cell membranes - in the form of pseudopodia- like protrusions outward - which, carried by actin filaments , enlarge the surface of the membrane and together form the so-called brush border of a cell. In unicellular organisms such as amoebas , their pseudopods are similarly constructed protruding cell processes with which they move.

All cell membranes are semi-permeable , they are permeable for some substances and less or not at all for others. While the lipid layer does not represent a barrier for lipophilic molecules, small hydrophilic ones can only pass through openings such as pores or channels - if they fit through and are not repelled as charged ions - and for larger ones such as glucose a supported transport through special carriers is to the membrane passage necessary. Except in exocytotic vesicles, the proteins in the cytoplasm cannot cross the cell membrane. That is why the distribution of substances and charges inside the cell differs from that outside. This creates electrochemical gradients across the membrane , which lead to a potential difference between inside and outside. All cells therefore have a membrane potential , which can be adjusted to a certain level, mainly through ion channels and ion pumps .

From an electrophysiological point of view , the cell membrane can be viewed in simplified form as a plate capacitor , the specific capacitance of which for membranes of different cell types is in the range of about 1 µ F · cm −2 .

The cell membrane has a hydrophilic , water-attracting, polar head group on the outer and inner surface . The center of the cell membrane can be understood as hydrophobic . This double- layer lipid layer is well permeable to small molecules such as water and has a very good permeability for dissolved gases ( O 2 , CO 2 , N 2 ). Since the membrane is largely impermeable to most substances due to the size of the molecules or the charge (ions), a special environment can be set up within the cell, which differs from the aqueous, external environment of the extracellular space . The substances dissolved in the water can pass through the membrane through special pores, channels or transporters, the type and number of which are determined by the cell.

Ion channels are proteins that reach through the cell membrane and form a hydrophilic channel through which mostly ions can pass. The transport is passive, the ions flow either into or out of the cell following the electrochemical gradient . This process happens spontaneously (with a decrease in free enthalpy , it is exergonic ). The opening and closing of a channel can usually be controlled and is z. B. controlled by electrical voltage or signal substances.

Most cells also have specific channels for water, so-called aquaporins .

Transporters or carriers allow ions or small hydrophilic molecules such as glucose or amino acids to pass through. They are brought through the membrane in that the respective transport proteins undergo a conformational change alternating between conformations whose binding sites are on one side or the other of the membrane. Only if there is a concentration gradient for the respective substance does its transport take place in a balanced manner ( Uniport ), which is why we also speak of facilitated diffusion here.

The cotransporter can be assigned to the transporter or viewed as independent. In principle, it is a carrier that transports two substances through the membrane at the same time, either in the same direction ( symport ) or in the opposite direction ( antiport ). One substance mostly passively follows a gradient, the driving force of which can also be used to transport the other substance towards a gradient. In this case, one also speaks of secondary active transport . Examples of this are the sodium-glucose symport in the intestinal epithelium or the sodium-hydrogen antiport in the proximal renal tubule .

Pumps transport substances through the cell membrane against a gradient and thus build up differences in distribution. This primarily active transport costs the hydrolysis of ATP . Therefore, these pumps are also enzymes that split ATP and use the released Gibbs energy for transport, and are therefore also referred to as transport ATPase . Examples of this are ion pumps , such as the sodium-potassium pump , or the calcium pump of the endoplasmic reticulum . 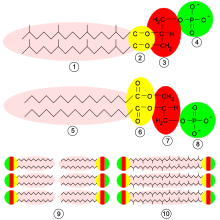 The cell membrane of archaea often contains isoprenoids (1) and ether (2) glycerol - phosphate (3-4) bound, in contrast to fatty acids (5) in Esterbindung (6). In contrast to the two-layer structure (9), with extremely thermophiles, tetraethers can covalently connect the inside and outside of the membrane (10).

In archaea , the cell membrane often shows a special structure. Often the lipid components are not fatty acids but isoprenoid alcohols, which are linked to glycerol not through an ester but rather an ether formation . There are also isoprenoids which form bonds on both sides and (as bola lipids ) thus pulling through and tensioning the membrane connecting both layers of the lipid layer. The cell membrane of these organisms is arranged in a single layer with such di- and tetraethers and is much more temperature and acid-stable. This allows archaea to colonize habitats with extreme environmental conditions, such as hot thermal springs .