Glycoproteins or glycoproteins are macromolecules that consist of a protein and one or more covalently bound carbohydrate groups ( sugar groups). The carbohydrate groups are usually covalently attached as a post-translational modification to asparagine , serine , threonine or hydroxylysine residues . This process is called glycosylation (the accumulation of sugars ). The bound carbohydrate residues vary greatly in size and range from monosaccharides to di- and oligosaccharides to polysaccharides . The carbohydrate content in glycoproteins can be a few percent (ribonucleases, thyroglobulin) up to 85 percent ( blood group antigens ).

Glycoproteins can fulfill numerous functions in the organism. They serve as structural components ( structural proteins ) of cell membranes , as lubricants (e.g. as part of mucus ) and for cell interaction ( membrane proteins ). In addition, some hormones (e.g. thyrotropin , hCG ) and components of the immune system ( immunoglobulins , interferons ) belong to the glycoproteins. Small glycoproteins are also known as glycopeptides .

Glycoproteins are common in nature and it is believed that there are probably more proteins with covalently attached carbohydrates than carbohydrate-free proteins. Sugar residues can help with protein folding or increase the stability of proteins. Often proteins that protrude into the extracellular space ( transmembrane proteins ) or perform extracellular functions carry carbohydrate residues. All export proteins as well as membrane proteins are or were glycoproteins during their biosynthesis . Glycoproteins therefore also play an important role in recognition reactions by the immune system , especially in mammals . Examples are antibodies and the proteins of the MHC , which interact with T cells or T cell receptors .

Glycoprotein solutions are often very viscous . Many different plasma proteins have been isolated in human blood plasma, of which only albumin and prealbumin have no sugar residues. 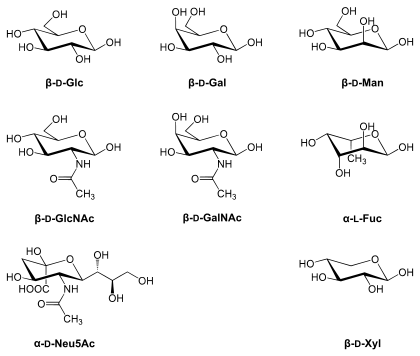 Structural formulas of the sugars found in glycoproteins; the β anomers are shown .

Only eight sugars play a significant role in human glycoproteins. These are

During the synthesis of glycoproteins, the sugars are mostly obtained from nucleotides .

The binding of the oligosaccharides to the protein can take place in different ways.

Here the sugar is bound to the nitrogen of the free acid amide group of asparagine ( N in the one-letter code of the amino acids). The N -Glycosylation is carried out in the endoplasmic reticulum (ER). N -Glycosides represent the most important group of glycoproteins, and a large number of plasma proteins, but also membrane-bound proteins, are among them.

Typical of N -glycosylation is the synthesis of a sugar precursor, which is formed independently of the amino acid sequence of the target protein, on the carrier molecule dolichol , which is present in the membrane of the ER. Dolichol is an isoprenoid made up of 10–20 isoprene units with an OH group at the end , which in turn is linked to a diphosphate . The oligosaccharide precursor is formed at the terminal phosphate residue and consists of 14 hexoses , the sequence of which is evolutionarily conserved among all eukaryotes . The first seven sugars are assembled on the cytosolic side: first two N-acetyl- glucosamines are attached to the dolichol phosphate, then five mannose residues. The sugar nucleotides UDP-N-acetyl-glucosamine and GDP-mannose were identified as donors . The precursor consisting of seven sugars is brought through the ER membrane by a transport protein from the group of phospholipid translocators ( flippases ) so that it is now oriented towards the inside of the ER. Four mannose residues are added to the structure, then three glucose residues. The monosaccharides for this last step also come from a dolichol phosphate. The precursor of 14 sugars can now be transferred to a suitable protein. The minimal glycolysis sequence is - Asn -X- Ser / Thr - (X = any amino acid except proline).

Here the sugar is bound to the hydroxy group of serine , threonine , hydroxyproline or hydroxylysine . The O-glycosylation takes place in the Golgi apparatus .

Animal membranes are relatively little glycosylated with an average of three percent (w / w). In contrast, plant membranes contain up to twenty percent (w / w) sugar residues, which are mainly bound to membrane proteins (the remainder to lipids ).