A blood group is a description of the individual composition of the surface of the red blood cells ( erythrocytes ) of vertebrates . The surfaces are distinguished by different glycolipids or proteins that act as antigens and can thus lead to an immune reaction . Blood groups are of particular importance in transfusion medicine. If a patient is transfused with blood of an unsuitable blood group, an immune reaction occurs, which in turn can lead to clumping (agglutination) of the blood and thus death. Blood groups are hereditary and can be used to rule out relationships (see parentage reports ).

For the classification of blood, the manifestations of certain antigens are combined into so-called blood group systems. The two most important blood group systems are the AB0 system and the Rhesus system because of their great importance in assessing the tolerance of blood transfusions . If blood from two different blood groups is mixed, it clumps together. The reason for this is the binding reaction between the antigens on the red blood cells and the antibodies in the blood plasma. A total of 35 blood type systems are recognized and described by the International Society for Blood Transfusion ( ISBT ) (as of 2015).

A blood group system can consist of one or more antigens that lie on the membrane of the red blood cells and against which other individuals of the same species can form antibodies (so-called allo-antibodies ). The assignment of antigens to a blood group system takes place via the genes coding for them . Each blood group system, by definition, must be genetically separated from others. This can be done in two ways:

Blood group systems according to ISBT 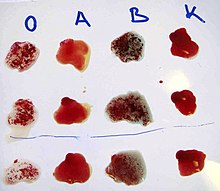 Schematic representation of the erythrocytes and serum antibodies in the AB0 system
→ Main article : AB0 system

The AB0 system was described in 1900 by the Viennese doctor Karl Landsteiner , for which he was awarded the Nobel Prize for Medicine in 1930 . The Hygiene Commission of the League of Nations decided in 1928 to designate blood groups uniformly throughout the world. The AB0 system was chosen. The AB0 system is the most important blood group characteristic in blood transfusion and comprises four different main groups: A, B, AB and 0.

The antibodies against factors in the AB0 system are developed in humans during the first year of life. The combination A and B has a codominant effect, the factor 0 recessive. The blood group in the AB0 system has been regularly surveyed worldwide for decades due to its great importance together with the Rhesus factor D.

Blood group 0 is referred to as blood group O in many countries. In addition, in some countries the groups are designated with the Roman numerals I, II, III and IV (instead of 0, A, B and AB).

The name rhesus factor comes from the experiments with rhesus monkeys in which this factor was first discovered in 1937. Karl Landsteiner wrote down the antibodies found according to A and B as C, D and E. Medically particularly relevant among these is the Rhesus factor D.

The rhesus factor is inherited dominantly , therefore the blood group characteristic rhesus negative is rare (approx. 15% of the population). The erythrocytes of rhesus-positive people have a "D antigen" (rhesus factor "D") on their surface. Rh-negative people do not have this antigen. The antibodies against Rhesus factor D are only formed in humans without this factor when they come into contact with it, i. H. when rhesus-positive blood components (erythrocytes and constituents) of a person get into the bloodstream of a rhesus-negative person.

This can happen during blood transfusions or, under certain conditions, during pregnancy or childbirth. Normally, during pregnancy, the bloodstream of mother and child is separated from one another by the placental barrier , and this barrier prevents the child's blood cells from entering the maternal circulation (or vice versa). If this is still the case, for example with microtraumas of the placenta, with invasive , prenatal interventions in the uterus and / or on the child, or z. B. in the case of an injury to the child, the umbilical cord or the placenta at birth - the condition is the introduction of the child's blood into the maternal bloodstream - the mother can be sensitized and form antibodies against the rhesus antigen of the child.

However, natural childbirth is one of the non-invasive interventions. Even a heavily bleeding wound (such as a vaginal wound in the case of a perineal tear ) usually prevents foreign blood from entering the bloodstream outside the body . Depending on the type and extent of invasiveness of the procedure significantly more likely is a sensitization on previous miscarriage and pre exempt curettage in induced abortion or abortion and other invasive procedures in the uterus , such as in the context of prenatal diagnosis , the chorionic villus sampling (CVS), amniocentesis (AC) and the umbilical cord puncture . The risk of the initiation of the formation of antibodies and immunization increases depending on the extent of the invasiveness or the risk of injury and bleeding.

If such an immunization occurs during pregnancy, it happens relatively slowly and does not usually lead to problems in the first pregnancy. Small amounts of red blood cells in the child's body may be destroyed, which can make mild jaundice , which typically occurs after birth, somewhat worse. However, if the mother is "sensitized" from the first child, i.e. her immune system has formed memory cells, then renewed blood contact can occur in the next pregnancy (again with a rhesus-positive child, approx. 85% of the population is rhesus-positive, 15% Rhesus negative) very quickly lead to the formation of antibodies in the mother.

Because the D antibodies are type G immunoglobulins (IgG immunoglobulins), in this case they can easily migrate through the placental barrier into the child's bloodstream. There, the child's erythrocytes, which are loaded with D-antibodies from the mother, are broken down prematurely in the child's spleen . There is a hemolytic anemia and other consequences. This can lead to haemolyticus neonatorum disease , in the worst case to malformations or to the death of the child. In light cases z. B. treated by phototherapy . This consequence can be counteracted by blood exchange and possible antibody formation can be checked.

The drug usually administered preventively against this process and its consequences in children (see Rhesus incompatibility # pathogenesis ) (e.g. using RHOPHYLAC from CSL Behring and RHESONATIV from Octapharma) is a blood product . These are anti-D antibodies and are referred to as "anti D" or "anti-D prophylaxis".

The Kell system is the third most important system in blood transfusions. Blood donors in Germany, Switzerland and Austria are regularly tested for the Kell antibody.

Inheritance is not yet fully understood. It is assumed that there are four antigenic types that are highly polymorphic , which, similar to the MHC genes, leads to strong variation even if they are closely related ( GeneID 3792 ). The Kell antibody (Anti-K, K1) is genetically combined with the Cellano antibody (Anti-k, K2) to form the KC system, as the proteins are very similar. The names of these IgG-type antibodies are named after pregnant patients - antibodies of the Kell-Cellano system can lead to serious incidents during transfusions and pregnancies.

There are three phenotypes in the MN system, caused by three genotypes that arise from the combination of two co-dominant alleles :

The MN system is combined with the other antigens S, s and U to form the MNS system .

The Duffy factor is an antigen and at the same time a receptor for Plasmodium vivax , the causative agent of tertian malaria . Duffy-negative carriers of the trait are resistant to this pathogen transmitted by the anopheles mosquito , as the modified receptor prevents contact with the host cell ( GeneID 2532 ).

Cellano , Kidd (Jk; discovered as a factor group in 1951 by the Americans Allen, Diamond and Niedziela), Lewis , Lutheran (Lu), MNSs, P and Xg are the names for other blood group systems. They stand for other antibodies against blood components, which are usually named after the patient in whom they were first observed. If a patient has the appropriate antibodies in the blood, dangerous, repeatable complications after a blood transfusion can occur. Usually only the antibody is known that can be detected with a test (clumping with test blood), while the genetic causes are not yet known.

When testing for blood groups, tests for rare antibodies are carried out regularly. Their positive result must be noted individually with the clinical indication of the blood group. These patients can only be given blood from their own blood or blood from other carriers with the same characteristics.

There is little reliable evidence of the origin of the various blood groups (the AB0 system). Molecular biological research has shown that blood group 0 evolved from blood group A about 5 million years ago as a result of a genetic mutation. It has also been found that those who have blood group 0 have a higher chance of survival in the event of a malaria infection ( Plasmodium falciparum ). This selection advantage has therefore contributed to the fact that blood group 0 occurs more frequently in the humid tropical zones of Africa and on the American continent than in other regions of the world. This polymorphism occurs in humans and other Old World monkeys . It is still largely unclear which other factors influenced the development and distribution of the various blood groups.

A cross in the table means that a transfusion from donor to recipient is possible. In some cases, this only applies provided that only the blood cells are transferred. When whole blood is transferred, including blood plasma , the various blood groups in the AB0 system are always incompatible with one another.

In transfusion medicine, a blood donor with blood group 0− is considered a universal donor . This is because erythrocytes of this blood group have no antigens A or B. I.a. In order to avoid destruction of the recipient's erythrocytes ( hemolysis ) by antibodies against A and B in the donor's serum ( minor reaction ), nowadays no whole blood is administered, but rather erythrocyte concentrates . B. a 0 donation to an A recipient is not possible (see above).