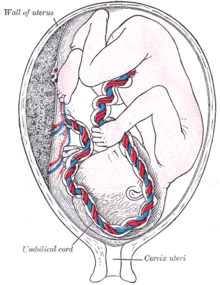 Embryo in utero. The umbilical cord is marked in color.

The umbilical cord , anatomically known as the funiculus umbilicalis , connects the embryo or fetus with the placenta in the womb of placental animals , including most of today's mammals as well as humans , besides monotones and marsupials . In the umbilical cord vessels in the fetal blood circulation, the blood flows arterially to and venously back from the placenta, where especially carbon dioxide as well as nutrients and oxygen are exchanged with the blood circulation of the mother or the pregnant woman.

In a full-term baby, the human umbilical cord is about 50–60 centimeters long, 1.5–2 centimeters in diameter, usually spirally wound and surrounded by the amnion . It initially contains four blood vessels, of which the right umbilical vein recedes between the 28th and 32nd day of embryonic development. Thereafter, the umbilical cord usually has three vessels, two umbilical arteries ( arteriae umbilicales ), which carry carbon dioxide-rich and nutrient-poor blood from the child to the placenta , and an umbilical vein ( vena umbilicalis ), which carries blood from the placenta to the child. Typical of the umbilical cord is the gelatinous connective tissue , which is responsible on the one hand for the necessary flexibility and at the same time protects against kinking in the event of bending loads. It consists of fine collagens , a few fibroblasts and large amounts of water-binding hyaluronic acid ( Wharton's jelly ).

In the medically assisted birth of a person, the umbilical cord is usually tied off or - with an umbilical cord clamp - pinched off and then cut. Different times of the so-called cord removal can be selected for this. In most animals, the mother bites the umbilical cord or it breaks off on its own. After the dried up umbilical cord has fallen off - after about three to ten days - a scar appears in the middle of the abdomen and the belly button heals .

Waiting for the umbilical cord to fall off with the afterbirth still attached is also called a lotus birth .

In technical terms, special supply hoses or cables are called umbilical cables (English for "umbilical cord"). These are used, for example, in space travel when refueling rockets , or they connect an astronaut's space suit with the life support systems during an outboard activity in space or serve to supply a diver with air while umbilical cord diving .