The AB0 system of blood groups was discovered in 1901 by Karl Landsteiner , for which he received the Nobel Prize for Medicine in 1930 . It is the most important blood group characteristic in blood transfusions and comprises four different main groups: A, B, AB and 0. There are still subgroups (A1, A2; A1B, A2B) and variants (e.g. A3, Ax; the latter includes A0 and A4).

In 1900 the Austrian scientist Karl Landsteiner described the blood groups A, B and 0, whereby he designated the latter as C. In 1902 Alfredo von Castello and Adriano Sturli found the fourth type AB. Independent of this, the Czech serologist Jan Janský also discovered the four blood group types of the AB0 system, as did William Lorenzo Moss . The inheritance rules in the AB0 system were first described by Ludwik Hirszfeld and Emil von Dungern in the years 1910–1911. Due to the large number of blood transfusions in World War I , it quickly became apparent that there were national differences in the distribution of blood groups. From this it was concluded in the sense of racism that individual blood groups are of higher quality than others. From an accumulation of blood group A in Germany and Scandinavia, the special significance of this blood group for the " Aryan race " was concluded.

Difficulties in the forensic blood trace research initially caused the detection of blood group 0. After the Second World War, the Finn KO Renkonen published, among others, that extracts of certain plants ( e.g. alpine laburnum ) react to group 0.

Uniform print for blood group B +

In German-speaking countries, the designations A, B, AB and the number 0 ( zero ) have established themselves . In the Anglo-American language area, however, the letter O ([ ˈoʊ ]) is used. An appended plus or minus sign, for example A +, refers to the rhesus factor D. This compact name emerged as a result of the regular determination of these important factors since the 1940s.

Only in the former USSR did Jan Janský's proposed designation Roman I, II, III and IV (instead of 0, A, B and AB) prevail. 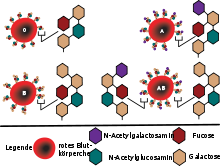 In contrast to other blood group systems, antibodies are always present in the AB0 system in adults (except for blood group AB). The cause is sensitization by various bacteria from the environment whose surface structure is very similar to the antigens on the erythrocytes , but the reason for this is (still) unknown. As a result, between 3 and 6 months of age, the infant develops antibodies against these surface structures of the bacteria, unless it is itself a carrier of the similar antigens on the erythrocytes. Since the immune system in this case recognizes the surface structures of the bacteria as the body's own structures, it does not form antibodies against them. In the case of blood group A (anti-B), sensitization by gram-negative bacteria such as the intestinal bacterium Escherichia coli has been proven. For blood group B (anti-A) reference is made to similar proteins of the influenza viruses, whose epitopes are similar to the A antigen.

The points of attack of the antibodies are determined by the glycosylation of blood proteins and lipids . A carrier of blood group A has antibodies which recognize the α-galactose (Galα for short) in the glycoside structure of the glycoproteins (blood group B) and bind to it. The erythrocytes agglutinate (clump) on contact . However, blood group 0 lacks these antigens, which means that they do not lead to agglutination and death in blood group A and B. This turns carriers of blood group 0 with Rh negative (see below) into universal donors, i.e. This means that your blood can be used for carriers of all other blood groups, since nowadays only purified red cell concentrates that do not contain any antibodies are generally used in blood transfusions.

The blood groups are determined by the A1 / A2, B and 0 alleles of the ABO gene , which is located on the long arm of chromosome 9 (9q34) ( GeneID 28 ). The products of the A and B alleles are glycosyltransferases that transfer N-acetylgalactosamine (A allele) or galactose (B allele) to the common precursor substance. A functional product of the 0 allele cannot be detected, that is, the gene is silent (amorphous) and the precursor substance is not modified.

The precursor substance (precursor) of the A and B substances is the so-called heterogeneous substance “H”, which is present on all erythrocytes. Chemically, the specificity of A is bound to α-N-acetyl-D-galactosamine , of B to D-galactoside and of H to L- fucose . The addition of L-fucose to the blood group lipoprotein skeleton is catalyzed by the fucosyltransferase encoded in FUT1 and is a prerequisite for the other blood group genes to become active. The blood group substances can also be detected in cells of other organ systems, in secretors also in saliva, sweat and urine.

The groups are detected with the aid of test sera (with appropriate antibodies): subgroup A1 through anti-A1 sera and anti-A1 phytagglutinins (= lectins); Subgroup A2: indirect detection (as A that does not react with anti-A1 sera); B: by anti-B sera; See also Tab., Fig. (A-subgroups, -variants not taken into account). The H-substance is detected by anti-H-phytagglutinins.

Among the tests for rare antibodies, the Bombay type is of particular importance. Due to a genetic defect, these people lack the precursor substance H, so that the genotype in the AB0 system has no effect. Accordingly, the immune system produces antibodies against the H-substance. Regardless of the inheritance of the AB0 type, erythrocytes of the Bombay type react neither with A nor B antibodies (phenotypically blood group 0). In contrast, the serum reacts with blood group 0 (phenotypically anti-0). Since the precursor substance H is present in every carrier of AB0, the Bombay-type cannot receive any donated blood.

When testing for blood groups, tests for rare antibodies are now carried out regularly. Their positive result must be noted individually with the clinical indication of the blood group. These patients can only be given blood from their own blood or blood from other carriers with the same characteristics. The frequency of anti-H-positive carriers of the Bombay-type trait is 1: 300,000.

When examining the allele frequencies, the first differentiation between A and A1 and A2 was found, since the antigens of A2 are only a quarter as common on the erythrocytes as in A1, and can thus be detected in simple laboratory tests. It was found that in test subjects of European origin the frequency is evenly around 80% for A1 and 20% for A2. A more recent study with the sequencing of the gene locations found 6 common alleles for German test subjects (A1, A2, B1, O1, O2, O3) and 18 rare variants. An investigation with the sequencing of the gene locations for Japanese subjects found a total of 13 alleles, of which the most common alleles are A1 (83%), B1 (97%), O1 (43%) and O2 (53%). The reduction in gene variants is typical of the founder effect in migratory movements.

Epidemic studies and molecular biological deductions indicate that carriers of blood group 0 have an increased chance of survival in the event of a malaria infection ( Plasmodium falciparum ), since the rosette formation of infected erythrocytes with uninfected ones with blood group 0 takes place to a much lesser extent and thus the dreaded ones Complications occur much less frequently. This selection advantage has therefore contributed to the fact that blood group 0 occurs more frequently in the humid tropical zones of Africa and on the American continent than in other regions of the world.

According to various researches, blood type has a certain influence on the prevalence of cardiovascular disease , chronic pancreatitis and memory loss in old age . For example, a study by the University of Vermont, when evaluating the health data of more than 30,000 US Americans, found an 80% increased probability for carriers of blood type AB to suffer from memory loss in old age - compared to carriers of blood group 0. From the The clinic has known the connection with cardiovascular diseases for some time, the Association of German Cardiologists attributes up to six percent of all heart diseases to an unfavorable blood group. This is presumably mediated by blood group-specific concentrations of the Von Willebrand factor , which plays an important role in blood coagulation and whose concentration in blood group 0 carriers is 25-35% lower than in other blood groups, which lowers the risk of thrombosis , for example . Correlations between blood groups in historical epidemics such as the plague are suspected, but the data situation here is rather inadequate, and there are also competing theses , for example that a mutation of the chemokine receptor (CCR5Δ 32) is the actual protective factor.

Epidemiological studies suggest that the AB0 trait could have an influence on the likelihood of becoming infected with SARS-CoV-1 and SARS-CoV-2 . The course of Covid-19 also seems to be influenced by the AB0 blood group. Carriers of blood group 0, for example, should therefore have a reduced risk of being infected with SARS-CoV-2 and the infection should be clinically milder for them than z. B. in carriers of blood group A. Results of a genome-wide association study also indicate a relevance of the AB0 properties for the course of a SARS coronavirus infection. However, if at all, the results only allow conclusions to be drawn about a relative risk reduction or increase, each with a small effect size . Therefore, a change of strategy for the individual with respect. Infection prevention or Covid-19 therapy can be based on the AB0 features not derived.

In the blood transfusion , the blood groups of AB0 system are of particular importance. While in most other blood group systems antibodies against foreign traits are only formed after a transfusion or pregnancy and therefore would not interfere until a few days later at the earliest, in the case of a new transfusion, in the AB0 system such antibodies are generally against all AB0 traits in the first year of life formed that the recipient himself does not have. Only compatible blood components may be transferred, otherwise there will be a life-threatening immunological reaction to the foreign blood. There are universal donors and universal receivers .

If a person receives blood of an incompatible blood type, a haemolytic reaction can occur, which destroys the blood components. Because of the substances released from the cells in this way, the destruction of erythrocytes is disadvantageous and can be fatal. A person has antibodies against all AB0 traits that they do not have themselves.

Reading example: A person with blood group 0 has antibodies against A and B, so can only receive erythrocytes of blood group 0, which has neither surface features A nor B.

It is important that the blood group compatibility when plasma is transfused is exactly the "opposite" to that when red blood cells are transfused . This results from the fact that the blood plasma contains the antibodies against the proteins on the red blood cells. The blood group compatibility in the AB0 system can be checked with a simple crossmatch outside the organism, in which the plasma on one side is brought together with erythrocytes on the other side. Incompatible blood groups lead to clumping (agglutination).

Reading example: A person with blood group 0 can receive plasma of any kind because none of the antibodies transferred harm his organism.

Frequency of the AB0 blood groups in Germany

Wikinews: Researchers use bacteria to change the blood type of stored blood  - Message