The name rhesus factor comes from the use of erythrocytes from the blood of rhesus monkeys to obtain the first test sera .

The Rhesus factors are a 1940 by Karl Landsteiner and Wiener Alexander Solomon found erythrocytes - antigen system. Rhesus-positive individuals have special proteins on the cell membrane of the erythrocytes (red blood cells), Rhesus-negative individuals do not. The name comes from the extraction of the first test serum from the blood of rabbits that had been treated with erythrocytes from rhesus monkeys ( Macaca mulatta ).

The affiliation of a person to the five most important factors C, c, D, E, e is referred to as the rhesus formula and represented as ccD.Ee or ccddee etc., see sections Inheritance patterns and the rhesus system .

About 85% of the white European and American populations are rhesus positive, about 15% rhesus negative. Almost 100% of all Africans, Asians and natives in North and South America are Rh-positive.

Significance for the organism

According to a study from 2009 with genetically engineered mice that lacked the rhesus gene RHCG and thus rhesus proteins, the proteins have important functions in the transport of ammonium ions (NH 4 + ) and ammonia (NH 3 ), the excretion of nitrogen-containing metabolic end products and maintenance a constant pH value in the blood. The genetically modified rodents showed a shift in blood pH to the acidic range, lower levels of nitrogenous substances in the urine and less fertile sperm in males.

Significance in pregnancy and blood transfusion

A life-threatening antigen-antibody reaction can occur with repeated blood transfusions of a Rh-negative individual with Rh-positive blood or from the second pregnancy of a Rh-negative woman with a Rh-positive child (see Rhesus incompatibility ). The rhesus-negative organism forms antibodies against the rhesus-positive erythrocytes, and hemagglutination (donor blood recipient) or hemolysis (child) occurs. The prevalence of blood group incompatibility in the western industrialized countries is 1–1.5 per 1000 pregnant women, the proportion of rhesus incompatibility is 40–80%.

Around 17% of Central Europeans are rhesus negative, around 4% in the eastern fringes of Europe, 25% in the Basque Country and around 15% in Switzerland. On other continents it is sometimes much lower. America , Australia and all of East Asia have no rhesus-negative natives at all .

The prevalence of people with rhesus negative blood plays an important role in determining the genetic distance between peoples. Large differences between nations in the incidence of Rhesus-negative blood indicate great genetic distance and, according to studies by Cavalli-Sforza and others, suggest an early branching of the races. The studies complement the findings that emerged from the study on lactose intolerance .

The cause of the strong variation in the RhD alleles is still unclear and, in view of the harmful effects on reproduction, had a mysterious effect. There are recently the first studies (2008/2009) that establish a connection with toxoplasmosis in humans - accordingly, RhD-heterozygous toxoplasmosis-infected people have faster physical reactions in critical situations than the two RhD-homozygous carriers, and can thus have the effect Compensate, which is modern in a higher number of traffic accidents with toxoplasmosis infection. In the absence of toxoplasmosis people without RhD allele show (homozygous negative) the best response times - the proliferation of wild cats in the African region may contain the spread of the RhD allele have greatly promoted, while in Europe the domestic cat only since ancient times in the People's living environment.

In contrast to the Rh factor “D”, which was primarily discovered, the small letters for the gene products of the Rh-CE gene (the most important antigen combinations are CE, Ce, cE and ce) also stand for antigens that can be detected by test sera with appropriate antibodies . In addition to the anti-C serum, there is also an anti-c serum etc. (the same applies to the Kell system ). The Rhesus factors therefore appear to appear twice as "ccddee" on standard-compliant German blood donation cards. The possibility of combination makes the Rh blood group system one of the most complex human blood group systems. 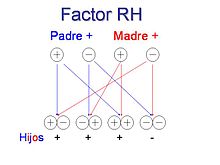 Representation of the inheritance of the Rhesus factor. Blue the paternal line, red the maternal line.

† The R 0 haplotype is much more common in people with roots south of the Sahara.

After the discovery of blood groups A and B, Landsteiner and Wiener continued their work. In the first designation by Wiener, the “R” stood for the responsible gene in rhesus monkeys, and the appended “h” for the associated antiserum. With a locus, “Rh” now stood for the positive test and “rh” for the negative test. Since other blood group characteristics were found, this designation as the Rh factor, which refers to today's Rhesus factor D (also called Rh1 or RhD), did not gain acceptance. However, due to its widespread use in specialist literature, the nickname was retained.

Fisher and Race recognized the connection between the other blood group characteristics and, in updating the known A and B of the AB0 system, introduced the designations C, D and E of the Rhesus system. Statistician Fisher and immunobiologist Race assumed three loci in the genome, each with binary expressions of the genes as C / c, D / d and E / e. Only later was it recognized that the characteristics for C and E lie on the same locus and consequently exist in four allele types. The two genes of the Rh system are on chromosome 1 at 1p36.2-p34 ( GeneID 6007 "RHD" and GeneID 6006 "RHCE" ).

Often, when specifying the D / d genes, only negative "dd" and positive, written as "D." or "D" , differentiated, the latter stands for both "DD" and "Dd" , but this differentiation is only possible through a (complex / expensive) exact genome analysis. Example: The blood donation card says ccDee or ccD.ee, the donor has ccDdee or ccDDee.

Later genetic engineering investigations were able to largely confirm the previous assumptions, in which the blood groups of the Rh system are closely related. The resulting proteins of the Rhesus system are largely homologous, so that it has long been assumed that they arise through alternative splicing of a common long gene sequence, as a result of which sometimes 1, 2 or even 3 variants arise in an organism. Carritt et al. then showed in 1997 the possibility that the RhCE arose through gene duplication from RhD, especially after a missing rhesus protein appeared for the first time in the human genome. (In some distant populations there are still no RhD-negative blood groups). In contrast to the assumption of Carrit et al. Willy A. Flegel and Wagner then showed in 2000 that the RhCE was the original gene from which RhD was duplicated. In 2000, several teams also showed that the genes for RhCE and RhD are close together and in opposite reading directions (the 3 'ends are adjacent). This also explains why a whole series of rarer Rhesus characters could be found in which exons of the RhD protein appear to be expressed in the RhCE protein .

Since there are other wild types in addition to the frequent forms of the Rh-D and Rh-CE genes, there is also a numerical notation for the blood group characteristics of the Rh system in the literature. Here D = RH1, C = RH2, E = RH3, c = RH4, e = RH5, ... C w = RH8 ... with over 50 variants today. How these are actually expressed in the genome has not yet been finally clarified. Non-human model organisms such as the mouse are not fully suitable for comparison because they do not have a RhCE / RhD duplication.

In rare cases, the rhesus factor occurs only in a quantitatively weakened form (D u or D weak ). For the blood transfusion, such patients take a middle position between Rh-positive and Rh-negative. If they are to receive blood, they are transfused with Rh-negative blood. In contrast, patients with a qualitatively altered D antigen, so-called D partial , are Rh-negative.

In the case of blood transfusion, blood groups are usually transfused from the same blood group, also with regard to the characteristics of the Rh system. However, there is a shortage of Rhd-negative blood donations .

If the RhD test is unclear, the patient's blood group is therefore usually shown as Rhd-negative.

According to some media reports, a 15-year-old girl in Sydney 2014 was the first to document a case of conversion of an originally Rhesus-negative patient to Rhesus-positive as a result of an organ transplant without the donor's blood cells or bone marrow cells being specifically transferred. The girl had received a donor liver from a rhesus-positive donor five years earlier. A blood group change, both of AB0 antigens and Rhesus features, ultimately with all detectable erythrocyte antigens, as a result of medical intervention is regularly observed in blood stem cell transplants of different blood groups . When selecting blood stem cell donors, the identity of the HLA antigens is the primary criterion, the blood group is a secondary criterion.