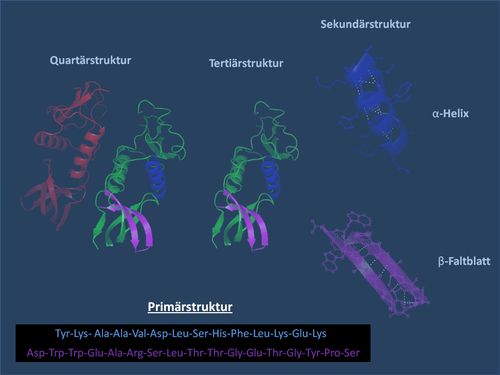 Effects on the shape of the protein

There is currently no reliable method for predicting the exact spatial arrangement of the amino acid chain based on the primary structure. As a rule, however, conclusions can be drawn about existing structural elements and the function of the protein from experience.

The conversion of the genetic information of a gene into the amino acid sequence of a protein is part of gene expression and protein biosynthesis . The first part of these controlled processes is transcription , the second is translation .

There are agreed conventions for specifying the primary structure of proteins and nucleic acids.

Analysis of the primary structure

The Edman degradation is the classic method for sequencing of proteins and consists of three steps:

The 3 steps are repeated to sequence the next amino acid.

The method was largely automated and works for peptides up to a length of approx. 50 amino acids. Larger proteins are cleaved into fragments prior to analysis, which are sequenced separately. Recently, mass spectroscopic methods have become increasingly important in this area.

This process has also been largely automated. The separation by electrophoresis usually takes place in a common gel track. The fragments are differentiated from one another by fluorescent markings that are detected by a laser .

RNA can be transcribed into cDNA by the enzyme reverse transcriptase and this DNA can be sequenced (see above).