In 1976 , Mao Zedong's long dictatorial rule ended with his death in September. In Germany, after the federal election on October 3, Helmut Schmidt remains Federal Chancellor of an SPD-FDP coalition . In the USA, Jimmy Carter is elected as the new president . In the summer the national team of Czechoslovakia becomes European soccer champions .

Palace of the Republic 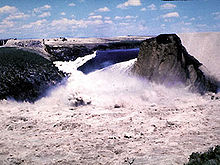 The rupture of the Teton Dam

Portrait of Mao Zedong at the Gate of Heavenly Peace