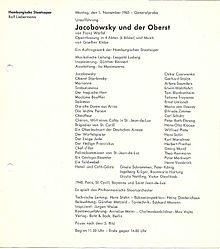 Jacobowsky and the Colonel, cast sheet for the Hamburg premiere

Klebe received musical lessons from his mother, the violinist Gertrud Klebe , at an early age . In 1932 the family moved to Munich . There he first attended the preschool of the Schönherrlschen private school, from 1935 the humanistic grammar school branch of the same institute. He continued the violin lessons he had already started in Mannheim with Melanie Michaelis , a sister of his mother's.

Another job-related change of location of his father took him to Rostock in 1936 ; After his parents separated, he moved to Berlin with his mother and sister in the same year . In the course of 1938 he began to sketch his first drafts of compositions; In 1940 he began studying music in the subjects of violin, viola and composition, supported by the city of Berlin .

After completing his labor service , Klebe was drafted as a radio operator for military service in an observation department in 1943. After the capitulation, he was taken prisoner by the Soviets , from which he was released shortly after the end of the war due to his health.

In 1950, after a long convalescence, Klebe resumed his composition studies, first at the International Music Institute in Berlin with Josef Rufer , and later in Boris Blacher's master class ; In addition, the composer got a job as a band tester and program designer in the serious music department of the then Berliner Rundfunk .

After his contract with the Berliner Rundfunk was terminated at the end of 1948, Klebe worked as a freelance composer in Berlin. In 1957 he decided again for a permanent position. As a successor to Wolfgang Fortner , he now worked as a lecturer for the subjects composition and music theory at the Northwest German Music Academy Detmold ; in 1962 Klebe was appointed professor. A number of respected composers emerged from his master class . After his retirement in 1990, Klebe remained closely connected to the Detmold University of Music. He died in 2009 after a serious illness.

His oeuvre includes more than 140 compositions, including 7 symphonies, 15 solo concerts, chamber music works of various instrumentation, piano works, sacred works and 14 operas, for which Lore Klebe mostly collaborated as a librettist . His first opera was Die Räuber (1957, Düsseldorf), based loosely on Friedrich Schiller's drama . As a commissioned work by the Hamburg State Opera , he composed the opera Jacobowsky und der Oberst, which premiered in November 1965, based on Franz Werfel 's play of the same name . On behalf of the Darmstadt State Theater , he and Lore Klebe wrote the opera Die Fastnachtsbeichte based on the story by Carl Zuckmayer , which premiered on December 20, 1983 in Darmstadt. His last opera was Chlestakows Wiederkehr (2008, Detmold), the libretto of which was based on Nikolai Gogol's comedy The Auditor .