First broadcasting house of the Berliner Rundfunk on Masurenallee. "Caution! This is not a West Berlin station "(1955)

The Berliner Rundfunk (BERU) was a radio station of the radio of the GDR . He produced the radio program of the same name . This had a political focus and provided information about what was happening in the capital Berlin . 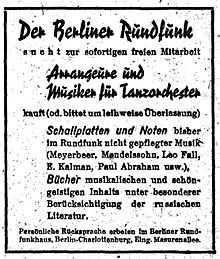 Classified ad in May 1945: Berliner Rundfunk is looking for freelancers, records and books on loan

Transmitting system of the Berliner Rundfunk in Königs Wusterhausen (1949)

The Berliner Rundfunk broadcast its first broadcast on May 13, 1945 under the control of the Soviet Military Administration in Germany (SMAD) via the Tegel transmitter on medium wave under the name “Radio Berlin” . This first broadcast was about half an hour long and was produced in a building at the station's location in Berlin-Tegel . A few days later it moved to the Haus des Rundfunks in Masurenallee , the seat of the former Reichs-Rundfunk-Gesellschaft in Berlin, and was renamed “Berliner Rundfunk”. This made the Berliner Rundfunk the oldest radio station in the GDR. The Berlin radio station was connected to the state broadcaster Schwerin with the Rostock studio and the state broadcaster Potsdam with the Cottbus studio.

After the division of Berlin into four sectors and the entry of the Western Allied troops on July 1, 1945, the house of broadcasting was located in the British sector, the transmission systems were in Tegel, i.e. in the French sector. Already in autumn 1945 the tensions between the Western Allies and the Soviet Union increased, as the Soviet Union claimed the Berlin radio for itself and did not want to give the other victorious powers airtime. They found the preference given to communist functionaries on the radio and the censorship of non-communist broadcasts particularly disturbing. This led, among other things, to the establishment of the RIAS as the American counterpart to the Berliner Rundfunk.

During the Berlin blockade , the situation worsened: the Soviet-controlled Berlin radio in the British sector, i.e. in the part of the city blocked by the Soviet Union, was in turn blocked by the British. On the support of the Berlin Airlift scale Tegel Airport to the radio tower radio station Tegel was blown up along with the under construction tubular steel mast, which was to replace him with endangering air traffic by French pioneers on 16 December 1948 which led to protests by the SMAD . The transmitter systems were then rebuilt in Königs Wusterhausen in the Soviet Zone within 2½ months. From March 20, 1949, the Berlin radio broadcast again at full power.

The first director was Max Seydewitz , replaced by Heinz Schmidt in 1947 . Schmidt had to set the focus of the program again because another station, the German station, was added. On October 3, 1948, he therefore set up a new program scheme which preferred to “deal with Berlin affairs” and “fans of serious and cheerful music [...] would get their money's worth more than before”, while the German broadcaster “lived up to its name [d ] “Should concentrate on all-German issues.

Two months after the start, on Sunday, May 8, 1949, the program still contained large gaps:

In the course of centralization in the GDR in 1952, there was also a change in broadcasting. GDR broadcasting had moved to a new location with the radio station Nalepastraße 18-50 in Berlin-Oberschöneweide . From 1952, all radio programs in the GDR were broadcast from here.

In September 1952, the newly founded State Broadcasting Committee's first measure was the new programs Berlin I with a political focus, Berlin II with word broadcasts, for example from lectures on popular science and social science. But all these interesting word broadcasts, as with the other two channels, should not make up more than 36 percent of the daily broadcast time. Music was broadcast the rest of the day. The Berlin III program was aimed primarily at the individual professional groups. The Mitteldeutsche Rundfunk Leipzig and the state broadcasters were dissolved. For this purpose, studios were set up in the individual district cities to capture the colorful variety of events in the GDR. All material was then collected centrally in Berlin and sent via Berlin I, II or III. In addition to the completely new look, the three stations have also added a new pause sign. The program also took over the shortwave of the previous German broadcaster (DLS).

From February 2, 1958 on, the Berliner Rundfunk also produced a second program, which was initially broadcast as “Berliner Rundfunk 2. Programm” and was renamed “ Berliner Welle ” in December 1959 . This program was only broadcast in Berlin on FM 95.05 MHz and was aimed primarily at listeners in West Berlin . The Berliner Welle ceased broadcasting on November 14, 1971 and was merged with the German broadcaster to form the " Voice of the GDR ".

The most popular broadcasts on Berliner Rundfunk were “Helga's Top (p) -Musike” with the popular entertainer Helga Hahnemann , “7-10 Sunday mornings in Spreeathen” with Kalle Neumann, Peter Bosse , “Frieda and Otto” ( Gina Presgott and Werner Troegner ), the "Schlagermagazin" with Herbert Küttner and "Mit Lutz und Liebe" with Lutz Jahoda . The station's sports programs such as “He, he, he, Sport an der Spree” with Heinz Florian Oertel were also popular . The current political news magazine program was called "Pulsschlag der Zeit". Berlin theater events were presented in detail in the series Berlin - World City of Theater . Critics of theater and cinema had their say in the Sunday column atelier and stage . One of the chief commentators of the Berliner Rundfunk was Manfred Engelhardt .

In connection with the liquidation of GDR radio, Berliner Rundfunk was privatized at the end of 1991 with effect from January 1, 1992 and renamed Berliner Rundfunk 91.4 . The reason was a law or a resolution by the Berlin CDU-led state government, which (heavily contested by the SPD) made the SFB the only state broadcaster in Berlin.

The Berlin FM frequency 91.4 MHz was taken over by the successor station. The former GDR frequencies in other federal states took over regional programs from ARD.

Broadcasting of the GDR

Earlier programs (united in 1971 to form the voice of the GDR): Berliner Welle  | Germany broadcaster