Logo of the Hamburg State Opera

The old city theater, built by Carl Ludwig Wimmel in 1827, photo taken around 1865

The old city theater with a new facade and attic by Martin Haller 1874, photo taken around 1890 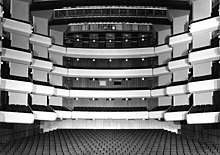 The Hamburg Opera at Gänsemarkt was founded on January 2, 1678 under the name Opern-Theatrum as the first public opera house in Germany. The game was played in an elongated wooden building on Jungfernstieg , at the corner of Gänsemarkt , which was built in 1677 by the Italian master builder Girolamo Sartorio . At the opening, the singspiel Adam and Eve or The Creator, Fallen and Erected Man was performed by Johann Theile . This religious subject was a concession to the Hamburg pastors, influenced by Pietism , who had vehemently opposed this secular institution. The proponents of the opera among the Lutheran Orthodox pastors took for this party. The first theater argument arose.

From the end of the 17th to around 1725, the Hamburg Opera played a leading role in the musical world of Europe. This is particularly emphasized by the performance of works by the important composers Reinhard Keizer , Georg Philipp Telemann and Georg Friedrich Händel . During his Hamburg years, Handel was also employed as a violinist and harpsichordist at the opera. His first opera Almira was premiered here in 1705 .

In the newly built comedy house of the Ackermann'schen actor group , a simple building with a hipped roof by the builder Johann David Fischer, operas were performed again from July 31, 1756, alternating with drama and musical theater . From 1767 to 1769 the Hamburg National Theater , also known as Entreprise , took over the house under the direction of Johann Friedrich Löwen. Lessing was the dramaturge on the stage, premiered Minna von Barnhelm here on September 30, 1767 and published the Hamburg Dramaturgy . From 1771 Friedrich Ludwig Schröder ran the house with some success. The premiere of Friedrich Schiller's drama Don Carlos took place here on August 29, 1787 .

On May 3, 1827, the stage moved into a new building as a city ​​theater on the site of the former Kalkhof on Dammtorstrasse . It was a simple building based on plans by Carl Ludwig Wimmel and had space for 2,500 spectators. The acoustics in particular set the new building apart from other opera houses of its time. The Hamburg Opera thus expanded its international reputation. However, since Wimmel's classicist facade appeared too sober to many contemporaries, the building was given a new representative facade by Martin Haller in 1873/1874 .

From 1874 to 1897 Bernhard Pollini was director of what was then the so-called city theater. Four times a week opera, twice drama, once operetta or ballet were on the program. Pollini was extraordinarily successful, with full houses and large surpluses. He brought 175 premieres, including 51 world premieres, on the stage. He hired important singers and conductors, to whom he paid high salaries, and thus brought the house to a high artistic level. Well-known composers such as Puccini and Tchaikovsky were hired to conduct their own works. In 1891 Pollini appointed Gustav Mahler to succeed Hans von Bülow as First Kapellmeister. Together with him, he organized a guest performance of the ensemble at the Covent Garden Opera of London , in which, under the baton of Mahler Der Ring des Nibelungen by Richard Wagner were listed and other operas.

In October 1906 and with guest appearances until 1913, Enrico Caruso delighted the Hamburg audience in various roles.

Despite the First World War , which brought many employees from all areas to military service , gaming operations continued during the war years. In 1925, the Hamburg citizenship approved the renovation of the stage, which is still in use today.

In 1934, during the National Socialist era, it was renamed again, this time to the Hamburg State Opera, which is still valid today . In a bombing raid on the night of August 2nd to 3rd, 1943, the auditorium was completely destroyed, only the stage was spared.

The military government approved new performances as early as 1946 . The auditorium was provisionally integrated into the stage building, later expanded into the ruins of the front building so that there was space for 1,200 spectators again. The Reconstruction Foundation of the Hamburg State Opera was initiated in 1952 by Alfred Toepfer . Under its honorary managing director Wilhelm Oberdörffer, the foundation raised 1.5 million marks in sponsorship funds within a few months . In 1953 the rebuilding began with the demolition of the ruined front building. By 1955 a new auditorium with around 1,690 seats was built according to plans by Gerhard Weber , which was opened on October 15, 1955 with a performance of Mozart's Magic Flute .

Anneliese Rothenberger dared to take her first solo steps in the Hamburg State Opera in 1946 under the artistic director Günther Rennert . Plácido Domingo made his debut as Cavaradossi in Tosca in January 1967, opening up his successes in Europe that carried him to a world career. Names like Montserrat Caballé , Luciano Pavarotti , Mirella Freni , Rudolf Schock , Martha Mödl , Birgit Nilsson are associated with the house. Important singers such as Gunnar Graarud , Josef Greindl , Lawrence Winters , Gottlob Frick , Franz Grundheber , Bernd Weikl and Kurt Moll were part of the ensemble for many years (see list of ensemble members of the Hamburg State Opera ).

Directors after the construction of the city theater (Dammtorstrasse) in 1827

Director of the Hamburg State Opera since 1945

Kent Nagano has been General Music Director of the Hamburg State Opera and the Hamburg Philharmonic State Orchestra since 2015 . Opera and orchestra director is the Swiss Georges Delnon . In the decade from 2005 to 2015, the Australian conductor Simone Young was artistic director and general music director of the house.

Today the Hamburg State Opera is one of the most renowned opera houses in the world, and in 1997 and 2005 it was named “Opera House of the Year” by the specialist magazine Opernwelt .

At the beginning of 2005, the new company building behind the main building was completed according to a design by the architects von Kleffel Köhnholdt, which offers space for three rehearsal stages and the opera stable . The “shell development” with apartments and offices prevents an unstructured facade of the - in this way internal - company building from negatively affecting the cityscape in the central area of ​​Hamburg.