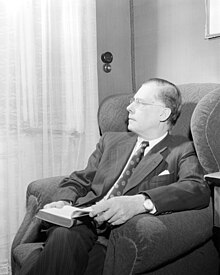 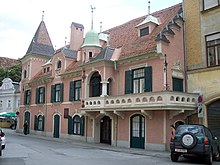 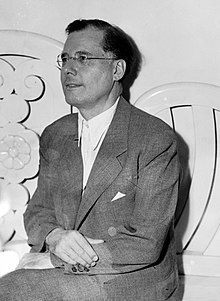 Recording from the Salzburg Festival Theater (1947) 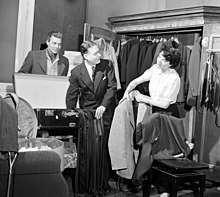 With wife Thea and son Karlheinz in his Vienna apartment

Böhm was born in Graz in 1894, in Böhm-Schlössl (today :) Kernstockgasse 21, which was historically redesigned around 1900 and is now a listed building. A commemorative plaque carved from copper indicates this.

Böhm came from the Egerland on his father's side from German Bohemia and from Alsatians on his mother's side. Like his father Leopold Böhm , he first studied law and received his doctorate in law. In his early youth, his goal was to become a pianist, but he recognized that he was made for the conducting profession. He studied piano and music theory at the Vienna and Graz Conservatoires .

His conducting career began in his hometown of Graz in 1917. With the support of Bruno Walter , he was called to Munich in 1921 . In 1927 he became general music director in Darmstadt , and from 1931 in the same position in Hamburg . In 1934 he succeeded Fritz Busch at the Dresden Semperoper . He held this position until 1943, when he became director of the Vienna State Opera for the first time . In the final phase of the Second World War , in August 1944, he was included in the list of the most important conductors approved by Adolf Hitler , which saved him from being deployed in the war, including on the home front .

In 1945 the Allied occupation authorities removed him from the position of director of the Vienna State Opera because of his close proximity to the Nazi regime and banned him from performing (similar to what Herbert von Karajan received). From 1955 (exactly after the end of the occupation ) to 1956 he was entrusted with this office a second time. Allegations that he was not present enough in Vienna, as well as protest rallies during performances he conducted, finally persuaded Böhm to resign. Karajan was his successor. In an open letter, Böhm then denied any problems between him and the ensemble and expressly thanked and acknowledged this and the Viennese audience. Since the 1960s in particular, he has returned to the State Opera as a conductor. In June 1979 he directed his last premiere at this house: The Abduction from the Seraglio by Wolfgang Amadeus Mozart (director Dieter Dorn , set and costumes Jürgen Rose ; with Edita Gruberová , Horst Laubenthal and Rolf Boysen as Bassa Selim ). In 1980 he conducted at a state opera tour in Japan Ariadne auf Naxos by Richard Strauss , and in the spring of 1981, his last performances were held in public, as he made a series of performances of Mozart at the State Opera Le nozze di Figaro conducted. A few weeks before his death, Böhm conducted the Vienna Philharmonic once again for the recording of the soundtrack for the Elektra film by Götz Friedrich . He did not live to see the date for his originally planned farewell concert at the beginning of September on the occasion of the reopening of the Alte Oper in Frankfurt am Main . He died at the age of 86 on August 14, 1981 during rehearsals for Richard Strauss' opera Elektra .

The only child from his marriage to the soprano Thea Linhard in 1927 was the actor and founder of the aid organization Menschen für Menschen Karlheinz Böhm (1928-2014). Karl Böhm's grave is on the Steinfeldfriedhof in Graz .

Böhm was not a member of the NSDAP . He was a member of the Kampfbund for German Culture (founded by Alfred Rosenberg ) , which merged with other organizations in June 1934 in the course of social conformity . At Hitler's intercession , Böhm was dismissed from his contract as Hamburg General Music Director in order to succeed Fritz Busch (1890–1951) at the Semperoper in Dresden in 1934 , whom the Nazi regime had forced to resign and emigrate for political reasons.

On August 2, 1935, Böhm wrote to the Reich dramaturge Rainer Schlösser : “Since I was born Austrian, have now been a Reich German citizen for twelve years, and of course have many fans in Vienna, especially in the National Socialist camp, I believe that these concerts are of the greatest propaganda Can be an advantage for Germany. With German greetings, Karl Böhm. ”In a further letter dated August 13, 1935 to obtain permission to perform in Vienna, he stated:“ It is certainly in the interests of the government if I go to Vienna as a German conductor to meet the numerous followers there To give new impetus to the National Socialist idea, especially since I am a native of Austria. […] Hail Hitler!"

Shortly after the annexation of Austria , on March 30, 1938, Böhm conducted the Wiener Symphoniker in the Wiener Konzerthaus at the “First Festive Concert in the New German Reich”, greeted the audience with the Hitler salute (without being obliged to do so) and left the Horst-Wessel as an introduction -Play song . Regarding the “referendum” on the “ Anschluss ” of Austria, Böhm wrote in April 1938: “Anyone who does not agree to this act by the Führer with a hundred percent YES does not deserve to bear the honorary name of German.”

In an article (published April 1939) Böhm wrote that “the path of today's music […] is paved by the worldview of National Socialism”, and advocated that “all possible artistic 'derailments' that do not take popular perception into account, from be made impossible in the first place ”.

In 1941 Böhm was quoted as follows in the book Künstler plaudern : “I had an unforgettable experience in Munich: It was on that memorable November 9, 1923, when Adolf Hitler's brown columns marched to the Feldherrnhalle . […] It was there that the harrowing events took place that form a milestone in German history. [...] we saw the blood that was shed for the idea that became victorious. "

As a result of the intervention of Reichsleiter Baldur von Schirach , Karl Böhm and his wife Thea received an Aryanized villa in Vienna 18 , Sternwartestrasse 70, whose rightful owners were compensated after the war. In 1944, in the final phase of the Second World War, when many artists were drafted into military service or committed to work on the “ home front ”, Hitler added him to the list of God-gifted conductors as one of the 15 most important conductors , which amounted to an exemption.

Boehm later wrote in his memoir: “The fact that I did not emigrate was later resented by me too. […] Unfortunately, I didn't have an offer from the Met or Covent Garden at the time. […] I […] believe that in the course of my activities both in Dresden and later in Vienna I have shown which side I have always been on. "

Whether Böhm ever expressed himself anti-Semitic is controversial: According to the historian Oliver Rathkolb (as of 2010) Böhm “does not know any anti-Semitic expression”.

A book published in 2001 quotes Böhm as follows: "As long as a Jew still lives in the Ostmark, I will not pick up the baton."

The daily newspaper Salzburger Nachrichten reported on December 29, 2015 that Helga Rabl-Stadler , President of the Salzburg Festival , had announced that the Karl-Böhm-Saal in the Salzburg Festival Hall should be equipped with a plaque referring to the role of the conductor in the NS- Time indicates. [...] In contrast to Herbert von Karajan, Böhm was not a member of the NSDAP, but is considered to have profited from the Third Reich. [...] On the blackboard there is a reference to an Internet address "where the personality of Karl Böhm is presented in German and English for what he was: a great artist, but politically fatally errant".

On March 22nd, 2018 the world premiere of the play 'Böhm' by Paulus Hochgatterer took place in the Graz Schauspielhaus, directed and with the participation of Nikolaus Habjan . This piece deals with the life, work and contradictions of the conductor and was nominated for the Nestroy Theater Prize 2018.

Boehm, generally known as difficult - whose sarcastic or cynical remarks are legendary - was very open-minded towards progressive opera directors. He concentrated on the musical aspects of a production and avoided getting involved in the production. So he worked repeatedly with Wieland Wagner , Günther Rennert , Otto Schenk , Jean-Pierre Ponnelle , August Everding and Dieter Dorn without any problems . His congenial collaboration with Wieland Wagner at the Bayreuth Festival made him known, especially in Wagnerian circles, as one of the great Wagner interpreters.

Karl Böhm conducted numerous famous orchestras - above all the Vienna Philharmonic, but also made many recordings with the Berlin Philharmonic , including a complete recording of all Mozart symphonies - as well as at many well-known opera houses in Europe and the USA - for example at the Metropolitan Opera in New York City . For decades he was also associated with the Deutsche Oper Berlin and many important music festivals (including the Bayreuth Festival and above all the Salzburg Festival ). His decades-long relationship with the Vienna Philharmonic, with whom he made numerous recordings, some of which have also been preserved as films, was particularly close. The focus of his repertoire was on Austrian and German classical and romantic music . He was said to have a fondness for Mozart's music - whom he, according to his own statement, believed to be a revolutionary - with Richard Strauss he had been on friendly terms since his time in Dresden and conducted several world premieres of Strauss' works. In public, Böhm was perceived as a down-to-earth musician, in contrast to his compatriot Herbert von Karajan, who was considered to be sophisticated . 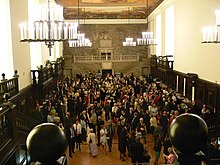 In his name a Dr. Karl Böhm Prize for young Austrian conductors awarded four times between 1975 and 1981. Since 1989, the state of Styria has been awarding the Karl Böhm Interpretation Prize for outstanding performance to music interpreters .

Kapellmeister and chief conductor of the Saxon State Orchestra Dresden