This article is about the musician. For the politician of the party Die Violetten see Bruno Walter (politician) . 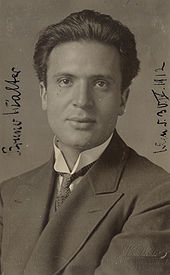 Bruno Walter (born September 15, 1876 in Berlin as Bruno Walter Schlesinger ; † February 17, 1962 in Beverly Hills , California , USA ) was a German conductor , pianist and composer with French citizenship and was emigrated to the USA in 1946 American citizen. He is one of the most important conductors of the 20th century. Walter was Kapellmeister of the Leipzig Gewandhaus (1929–1933), chief conductor of the New York Philharmonic (1947–1949) and permanent guest conductor of the Vienna Philharmonic .

Bruno Walter came from a German-Jewish family. At the age of eight he began studying music at the Stern Conservatory in Berlin , and when he was nine he made his first public appearances as a pianist. The impression that Hans von Bülow made on him led him to embark on a conducting career in the early 1890s. A first engagement at the Cologne Opera in 1893 with first conducting was followed in 1894 as an assistant to Gustav Mahler at the Hamburg Opera . Mahler became the artistically formative role model; From then on, Walter regarded himself as his pupil, even if he initially refused Mahler's request to follow him to the Vienna Court Opera , where he became the director of the opera. Only after a season in Hamburg and further stations in Breslau (1896/97), Preßburg (1897/98), Riga (1898–1900) and Berlin (1900/01) did he follow Mahler in 1901 as Kapellmeister at the Vienna Court Opera. According to Hagedorn, Mahler had previously written to him in the summer of 1901: "Shave your beard off before you arrive in Vienna." 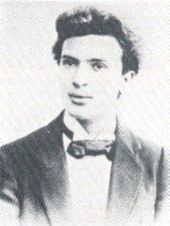 In May 1901 he married the soprano Elsa Korneck (1871–1945); the marriage had two daughters, Lotte (1903–1970) and Marguerite (1906–1939). In the following years his international career began, he had guest conductors in Prague, London and Rome. After Mahler's death he conducted the world premieres of two of Mahler's important late works: The Song of the Earth in Munich in 1911 and the 9th Symphony in Vienna in 1912.

In 1911 Walter became an Austrian citizen and officially deleted “Schlesinger” from his name on the occasion, after he had used the stage name “Bruno Walter” since his engagement in Breslau. By 1912 he was conductor of the Vienna Court Opera more than 850 times. In the Wagner year 1913 he left Vienna and became general music director of the royal court opera in Munich , where he stayed until 1922. (In 1916 Thomas Mann publicly defended him against the anti-Semitic allegation that Walter lacked “stylistic security” for Wagner's music.) He renewed the repertoire of this opera house and advocated the music of his time; In 1917 he conducted the world premiere of Hans Pfitzner's opera Palestrina . He was also very committed to the composer Ethel Smyth . During this time he freed himself from Mahler's strong influence and understanding of music. 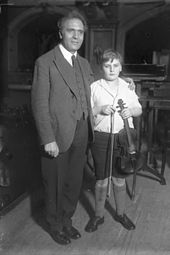 In 1923 Walter conducted for the first time in the United States . In 1924 he went to the Städtische Oper in Berlin-Charlottenburg as musical director and began his long-term activity at the Salzburg Festival , which he was instrumental in founding. In 1929 he moved from Berlin to Leipzig , where he succeeded Wilhelm Furtwängler as director of the Gewandhaus Orchestra .

When Bruno Walter in March 1933 shortly after the " seizure " of the Nazis its fourth concert with the Berlin Philharmonic wanted to give, threatened the new rulers, they would be in the hall everything to bits beat if Walter should enter the podium. As a result, Walter emigrated to Austria. There he often conducted the Vienna Philharmonic , and he also directed numerous opera performances at the Vienna State Opera and at the Salzburg Festival. In 1936 he became an artistic advisor with extensive expertise in the Erwin Kerber management at the Vienna State Opera. During this time he was also a permanent guest conductor at the Amsterdam Concertgebouworkest . After the "Anschluss" of Austria in 1938 - the news of the invasion of the Wehrmacht reached him on a concert tour in Amsterdam - he had to emigrate again, first to Lugano , then received French citizenship, but in November 1939 went to the USA, where he was a prominent figure Conductor of the Los Angeles Philharmonic Orchestra immediately appointed and naturalized in 1946.

Play media file
Bruno Walter with the Concertgebouworkest in Amsterdam, 1946

In 2012, Hagedorn wrote that Walter was "the most famous conductor among all the musicians, composers and musicologists who emigrated to the USA during the time of the 'Third Reich'". At that time at least 1,500 European musicians fled across the Atlantic, "probably the greatest talent transfer in world history". About 97 percent of the exile was due to “racist persecution”.

In the United States, Walter conducted some of the most important orchestras in the country and from 1941 to 1959 performances at the Metropolitan Opera in New York and lived in his own house on Bedford Drive in Beverly Hills , California , with Franz Werfel until 1945 and with Alma Mahler until 1951 -Dice as neighbors. After the Second World War, from 1947 onwards, Walter frequently returned to Europe to conduct. From the late 1940s he worked again with the Vienna Philharmonic.

In 1943 he helped the then 25-year-old Leonard Bernstein to his meteoric rise by chance. When Bruno Walter was unable to conduct a concert by the New York Philharmonic Orchestra that was to be broadcast across the country on the radio because of flu, he sent Bernstein, who stood in for him and suddenly became famous overnight.

One of the exceptional artists that Bruno Walter discovered and promoted is the British contralto Kathleen Ferrier , who developed into one of the most important representatives of her field during her short career. Under Bruno Walter she sang in Gluck's Orfeo ed Euridice , a. a. at the Glyndebourne Festival in England, and Mahler's Song of the Earth . In several song recordings with Kathleen Ferrier, Bruno Walter later showed his great talent as a pianist. In 1949 he recorded Mahler's Kindertotenlieder with Ferrier and the Vienna Philharmonic , the Rückert Lieder in 1952 and the Lied von der Erde in the same year .

Grave of Bruno Walter in the cemetery of San Abbondio, Collina d'oro-Gentilino ( Switzerland )

In 1955 and 1956 Walter appeared again with the Vienna Philharmonic and made music with them and the soprano Sena Jurinac a . a. in the State Opera, in the Wiener Musikverein and at the Salzburg Festival, including works by Gustav Mahler. In 1956 he received the Ring of Honor of the City of Vienna , in 1957 the Arthur Nikisch Prize and in 1959 the Karl Renner Prize . In 1957 Walter selected musicians from the American west coast for the Columbia Symphony Orchestra in order to record important parts of his repertoire again in stereophony . In the epilogue of his volume of essays, Von der Musik und vom Musieren , published in the same year , Walter made a commitment to anthroposophy , which he got to know and appreciate in the last years of his life. In 1960 he made his last guest appearance in Vienna and in 1961 received the Austrian Decoration of Honor for Science and Art . He died in his Beverly Hills home in 1962.

In contrast to his conducting career, the composer Bruno Walter has remained largely unnoticed to this day. His works lie with the estate in Vienna in the library of the University of Music and Performing Arts , to which they were given by Walter's daughter Lotte after his death. These include two symphonies and a violin sonata .

Both in Salzburg and in Berlin light field and in Munich-Englschalking streets were named after him, as Asteroid (16590) Bruno Walter .