The Austrian citizenship has someone as a citizen of the Republic of Austria and at the same time as citizens of the European Union from. The legal basis is the Citizenship Act of 1985 with the changes that have resulted from Austria's membership in the EU since 1995.

The Austrian nationality law mainly follows the principle of descent ( Latin ius sanguinis = right of blood). According to this, legitimate children receive the citizenship of one of their parents, illegitimate children that of their mother (§§ 7, 7a and 8). If only the father of an illegitimate child is an Austrian citizen, but the mother is a citizen of another country, the child acquires citizenship through descent if the Austrian father has either recognized paternity within eight weeks or his paternity has been determined by a court.

The granting of citizenship is extended to the applicant's spouse and children under certain conditions.

Even if there is a legal claim, the general naturalization requirements must be met. The legal right to be granted citizenship is therefore given under one of the following conditions:

An award can take place if:

For those persecuted during the National Socialist era who were previously Austrian citizens, there is the possibility of regaining citizenship by means of a written notification ( Section 58c StbG). From September 1, 2020, following the amendment of Section 58c, this option will be available for those previously persecuted who were Austrian citizens or who lived in Austria and were in possession of the citizenship of a successor state Austria-Hungary and had to leave the country by 1955, as well as their descendants up to Generation of great-grandchildren.

By voluntarily renouncing Austrian citizenship, one cannot become stateless under any circumstances. Without proof of the possession of a foreign nationality, the waiver based on international agreements cannot take effect.

For certain professions, possession of Austrian citizenship is a legal requirement in order to be able to exercise it, such as judges, police officers and other professions in the civil service.

However, the citizen can have dual citizenship since birth if he or she is born as a child of an Austrian in a country in which every person born there is automatically a citizen of this country (example: an Austrian living in Brazil has children there, these are dual citizens).

Granting and proof of citizenship 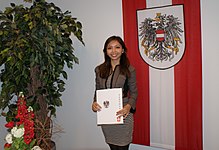 Austrian citizenship is awarded by the respective governor .

For Austrian law, the General Civil Code (ABGB), which came into force on January 1, 1812, was the first significant codification of the most fundamental provisions on citizenship. Sections 28 to 30 etc. define who is a citizen. "When the General Civil Code came into force on January 1st, 1812, precise provisions on the acquisition of Austrian citizenship were made in its area of ​​application for the first time."

The municipal law of April 24, 1859 defined the concept of homeland law , i.e. the competence of a municipality association for one's own person , to which one permanently belonged. With the right of home, a right to undisturbed residence, the right to vote (from 1906 also for all male citizens) and to social security in the event of poverty or need could be asserted.

After the settlement with Hungary in 1867, the constitutional law on the general rights of citizens was passed in the same year, which stipulated in Article 1 for the kingdoms and countries represented in the Reichsrat : All members of the kingdoms and countries represented in the Reichsrathe have a general Austrian citizenship right . This right of citizenship was valid until the end of the monarchy in 1918. For the countries of the Hungarian crown , Hungarian citizenship has been in effect since the settlement.

Dissolution of the Habsburg Monarchy

Certificate of origin as confirmation of the local law of origin, Austria, 1929

Through a declaration to the Republic, people who had been resident in German Austria since 1914 could also obtain citizenship. Persons who at the time of the announcement were entitled to reside in a municipality in the defunct Austria (with the exception of Galicia , Dalmatia and Istria ) that was outside the German-Austrian Republic also had the right to declare themselves as German-Austrian to the authorities.

The question of the status of Jewish war refugees became a political issue between Christian socialists , socialists and German nationalists . Thousands had fled during the First World War, mainly from Galicia , mainly to Vienna. Despite verbal riots between the political camps, however, they were ultimately treated equally like all other citizens of the former Habsburg Empire. The young republic thus had over 200,000 Jewish citizens.

In 1920 the provisional constitutional rules were replaced by the Constituent National Assembly by the Federal Constitution , which is still in force today . The implementation of the Citizenship Act was now the responsibility of the Austrian federal states . In addition to federal citizenship, state citizenship was introduced, the prerequisite for which in turn was the right to live in a municipality.

In 1925 a new citizenship law was passed, in which the state and federal citizenship as well as the home law in the municipalities was newly regulated. In addition to the birth, citizenship could now be granted by award, whereby a four-year residence had to be proven. In addition, teachers at a domestic university were automatically granted citizenship. Married women automatically received their spouse's citizenship.

After the “Anschluss” of Austria, the “Ordinance on German Citizenship in the Land of Austria” of July 3, 1938 gave Austrians German citizenship . The previous juxtaposition of parish and parish registers was abolished in August 1938 and the Viennese system of civil registers was introduced in all parishes. Many Jewish citizens previously listed in these civil registers were stripped of their citizenship; Certain “ Reich citizens ”, i.e. “citizens of German or related blood ”, immediately lost the German Reich citizenship they had acquired until the end of 1938 in the course of the implementation of the Nuremberg Reich Citizenship Law and, like German Jews, were excluded from “voting rights in political matters” as second class citizens . With the "Twelfth Ordinance on the Reich Citizenship Law", the further provision was issued that "Jews and Gypsies [...] do not become citizens" and "cannot be citizens of revocation or protection members" (Section 4 (1)). They were completely disenfranchised and the term “ valid Jew” was also applied to first-degree Jewish half-breeds who were not German citizens. A short time later, on July 1, 1943, the 13th ordinance on the Reich Citizenship Act was issued: According to § 1 Para. V. m. Paragraph 2 could now be punished directly by the police for criminal acts by Jews; henceforth they were at the mercy of naked arbitrariness . Section 2 (1) of the 13th ordinance stipulated that the property of a Jew fell to the Reich upon his death .

After the Second World War and the re-establishment of the Republic of Austria, the Austrian Citizenship Transition Act of 1945 regained Austrian citizenship who were Austrian at the time of the “Anschluss” and who had not taken on foreign citizenship between 1938 and 1945; also those persons who would have obtained federal citizenship through legal succession (descent, legitimation, marriage) during this period.

The 1983 amendment to the Citizenship Act pursued the establishment of the principle of equality and eliminated provisions contrary to this in order to fully meet the requirement of equal treatment of the sexes. The legitimate mother was put on an equal footing with the legitimate father in imparting citizenship to her children; Equal treatment of male and female spouses of citizens when acquiring citizenship was also established.

The government's draft law in 2005/2006 provided for a drastic tightening of the naturalization law: On the one hand, all exceptions should be deleted, the minimum length of stay increased to six years and children born in Austria to foreign parents should only be naturalized at the age of six. On the other hand, the applicant had to complete a 300-hour German course with a final exam. The draft was largely adopted in the 2005 amendment to the citizenship law.

A government bill to amend the Citizenship Act was submitted to the National Council on April 30, 2013 following the decision in the Council of Ministers and has been in force since August 1, 2013.

According to this, foreigners are allowed to be naturalized after a lawful and uninterrupted stay of at least six years in the Austrian federal territory if they are well integrated ( § 11a StbG). In addition to the general requirements for granting citizenship ( Section 10 StbG), it is to be granted to the alien according to Section 11 (6) if

In addition, the activity of the foreigner, with which sustainable personal integration is to be proven, must serve the general good in a special way and represent an integration-relevant added value for his integration in Austria. This must be justified in detail by the foreigner and the respective institution in the context of a written statement.

With Austria's accession to the European Union in 1995, as a result of which the citizens of the member states were granted the same professional access rights as Austrian citizens within the framework of European integration , this automatic citizenship acquisition was only valid for non-EU citizens. Since, from September 1, 2001, university professorships are only to be advertised for employment under private law, this provision of Section 25 (1) StbG has now become obsolete due to the discontinuation of the public service contract for new university teachers and therefore through the First Federal Constitutional Law Cleansing Act (1st BVRBG ) of January 4, 2008 as no longer valid.

The regulation for professors (entry into service as a university professor, Section 25 (1)) was thus repealed by a 2008 amendment to the law.

In addition, the spouse and unmarried underage children of foreign university professors appointed as civil servants also received Austrian citizenship (Section 25, Paragraph 2) by declaring that they “want to belong to the Republic as a loyal citizen” within one year of commencement of employment and 3). In this particular case of naturalization, dual citizenship was tolerated. A parliamentary question on the number of people naturalized in this way showed that no statistics were kept on this.

At the Turkish constitutional referendum in 2017 , some Turks with an Austrian passport tried to appear in the Turkish electoral roll as eligible to vote. Her illegal dual citizenship was discovered, which was particularly in the media focus. Thereupon, on the initiative of the FPÖ , alleged Turkish voter registration lists were passed on to the respective state authorities; it was assumed that there were 20,000 “bogus citizens”. The verification turned out to be difficult; In August 2018, 70 Turks were sent notices from the citizenship authorities in which the loss of Austrian citizenship was determined. The VwGH confirmed in a decision the determination of the loss of citizenship.

In Austria people can be naturalized "in the special interest of the Republic" in an urgent procedure. So far, their names have been published annually as a list. For 2017, this was done with a kind of exception, in which the consent of the persons concerned was obtained individually. This is no longer possible with the application of the General Data Protection Regulation . The Interior Ministry currently sees “no viable legal basis” for this, but would like to create one if the government so decides. Peter Pilz continues to demand publication in order to counter the risk of corruption.