The University of Music and Performing Arts Vienna (mdw) is an Austrian university located in the III. Viennese district Landstrasse , Anton-von-Webern-Platz 1. According to its own information, it is the largest art university in Austria and the largest music university in the world. Around 3100 students are looked after by around 850 teachers . Since 2002, it has been divided into 24 institutes offering artistic, artistic-scientific and purely scientific teaching. The rector is Ulrike Sych .

The University of Music and Performing Arts

As early as 1808, the establishment of a conservatory for music based on the Paris model was discussed ( Conservatoire de Paris ). The Gesellschaft der Musikfreunde in Vienna , founded in 1812, made this undertaking its main task, so that a singing school could be established as early as 1817, which laid the foundation for such an institution. Thus, 1817 is also the official founding year of the mdw. In 1819 instrumental lessons began with the engagement of violin professor Joseph Böhm .

Column hall to the stairs, Kaiserstein 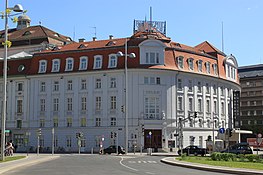 With short interruptions, the range of courses was massively expanded in the course of the 19th century, so that by the 1890s there were already over 1000 students. In 1909 this private institute was nationalized by a resolution of the emperor and was now called the Imperial and Royal Academy of Music and Performing Arts .

With the nationalization, it also got its own house: In cooperation with the Wiener Konzerthausgesellschaft , a building with a rehearsal stage (today: Akademietheater ) was built on Lisztstrasse from 1912 , which was already available in January 1914. After the First World War, the institution was called the State Academy (1919). In 1928 the academy was expanded to include an acting seminar ( Reinhardt seminar ) and a music education seminar. Between 1938 and 1945 it was continued as a Reich University with the exclusion of Jewish teachers and students.

After the war in 1946, the institution became an art academy again, from 1970 to 1998 it was called the University of Music and Performing Arts , and since 1998 it has been a university .

In 1952, Walter Kolm-Veltée established a special course in film design. In 1960 a film class was added, led by Hans Winge . In 1963 the two courses were combined in the newly established Film and Television Department. Additional courses followed, and since 1998 the department has also been known as the Vienna Film Academy .

In addition to the head office, the mdw campus on Anton-von-Webern-Platz in the third district, there are other branches in the third district at Ungargasse 14, in the Salesian convent at Rennweg 8, at Metternichgasse 8 and 12 and at Lothringerstraße 18. In Vienna's first district there are classrooms at Karlsplatz 1 and 2 and Singerstraße 26. There are also buildings in the 4th district at Rienößlgasse 12, in the 13th district in the Schönbrunn Palace Theater and in the 14th district in the Palais Cumberland on Penzingerstraße .

The monumental, functional purpose building in the sober, classicist forms of Hofbauamt, the former Wiener Neustadt Canal (now the S-Bahn tracks located), has been conducting the place naming 1998 the address of Anton von Webern-Platz 1 in the existing since 1850 3 . District .

In 1776, at the suggestion of Emperor Joseph II, an animal hospital was built in the former Jesuit dairy. 1821–1823 a new building was carried out by Johann Nepomuk Amann , with an extensive facility planned. The main building extends with a long facade to Linken Bahngasse (at the time of construction it was still on the canal, which was opened in 1803), there are numerous additions. The Kaisersteinbrucher master stonemasons received a major order, who furnished the spacious entrance hall with Tuscan columns, pilasters and coupled pillars and created the spacious pillar staircase around an open shaft, all made of light Kaiserstein with the typical blue translucent inclusions. Until 1975 the building was the seat of the University of Veterinary Medicine, from 1975 to the University of Veterinary Medicine .

In 1996 the building was chosen as the new headquarters of the University of Music and Performing Arts Vienna and was completely renovated by the architect Reinhardt Gallister. The historical structure has been preserved, elements such as glass, wood and stone are formative stylistic devices; Modern technology and equipment were combined with good room acoustics. Studios, classrooms and halls can also be rented externally.

The isa - International Summer Academy is the university's musical summer campus. More than 300 students from over 40 nations take part in two weeks of top-class master courses in the Semmering region and in Vienna. The summer campus was founded in 1991 as an initiative by Michael Frischenschlager. The aim of the isa was to enable especially talented young students, especially from Central and Eastern European countries (CEE countries), to make musical encounters and to establish international relationships. Johannes Meissl has been the artistic director of isa since 2005 . Isa has had special departments since 2013: isaOperaVienna and isaScience . IsaScience is the forum of the scientific institutes of the mdw, which is held on the annual topics of the isa and addresses both the public as well as doctoral students of the mdw and internationally. The specialization isaOperaVienna offers singing courses in cooperation with the Institute for Singing and Music Theater.

In addition to the artistic training, the scientific institutes (or professorships and lecturers with the right to teach ) form an essential part of the university's work. A special feature of the mdw is the high degree of networking between science and art. The right to award doctorates is the basis of a university and is implemented at the mdw in the PhD course . Subject areas of scientific work are:

See also : List of Rectors of the University of Music and Performing Arts Vienna

In the QS World University Ranking by Subject , the university was ranked second worldwide in the field of performing arts in 2016, fifth in 2017 and fourth in 2018. In 2019 it took first place together with the Juilliard School .