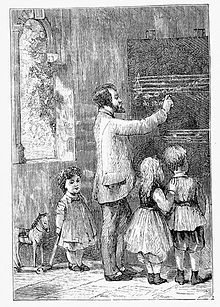 A father explains musical notation to his children

The music education is concerned with the relationship between music and man in appropriation and mediation processes. Perspectives of upbringing , education , teaching, learning and teaching play a role. Music education as a science must be distinguished from music education practice . 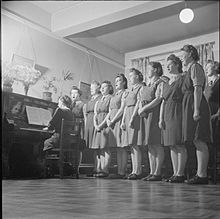 The subject used to be called music education in research circles and at educational institutions . The term still exists, but mostly the term music pedagogy is preferred. The distinction is also controversial among scientists . From the history of music education, in the course of music education, which was also abused in the Third Reich , the term education seems more appropriate to many.

In turn, only part of the music pedagogical science includes the didactics of the subject of music, as it is taught in general schools. Other areas include instrumental and vocal pedagogy, elementary music pedagogy, the pedagogy of lifelong music learning, or comparative music pedagogy, which deals with music and its communication in other countries.

In music didactics , the fundamental question asked is why music should be taught, which content and topics are most important, and how and with which means and media this should be done optimally. The latter is in turn also referred to as the methodology of music teaching and thus describes a further sub-area of ​​music education.

On the other hand, music education is initially also a part of education as a whole. Scientifically obtained knowledge of general pedagogy is often just as valuable and valid for music pedagogy. B. Insights into the fact that people are particularly good at acquiring something, i.e. learning, when they are motivated and have a positive attitude and when it challenges them a little, but they are not overwhelmed.

Even the ancient high cultures knew a regular music education. It was firmly established in public life in Egypt and ancient China . The musical ideas of upbringing that apply in Western cultures are of Greek origin. In the third book of his Politeia, Plato attached great importance to music , as it forms character and soul and, as an order structure, represents an analogy to the state. In his poetics, Aristotle regarded music as a mimetic art; he accorded it both a healing and a moral educational effect.

The music education of the Middle Ages took place under the supervision of the church mainly in monastery and cathedral schools . Their teaching content corresponded to the speculative music theory of the time, which belonged to the number-oriented quadrivium within the Artes liberales . The instrumental as well as all secular music belonged to the field of minstrels , who had a dishonest profession and belonged to a social class with little respect.

The humanism and the Reformation dealt with augmented with music educational issues, so that from the second half of the 18th century, a theoretically sound science developed. Suggestions came from Johann Heinrich Pestalozzi , Johann Gottfried Herder , Jean-Jacques Rousseau , Johann Adam Hiller and Johann Wolfgang von Goethe . In the first half of the 19th century, the technical and artistic training and the - in today's educational sense - social orientation of the subject were emphasized. In the second half of the century, under the effect of neo-humanism, state regulations followed, which, however, could not elevate school music to an established and independent subject. This only succeeded in the 20th century with the onset of pedagogical reflection on aesthetic , psychological and sociological questions, on the meaning and effect of music and on the reception of various forms of music. An influential figure with synaesthetic abilities was one of the a. Gertrud Grunow .

As with other school subjects, the critical reappraisal of the subject's past began late during the National Socialist era.

The music education research can be methodically divided in three directions:

In view of recent interdisciplinary research in the areas of brain research , psychology and pedagogy, however, z. For example, it can be assumed that dealing with music as early as possible in the life span and at all levels of appropriation is most meaningful, most sustainable and most effective.

Hermeneutically , the attempt is made to understand the current reality of music pedagogical practice and to interpret it against the background of its historical development.

The basis for this research is always the artistic-practical, the music-theoretical-analytical and the historical occupation with music. Without musical skills and knowledge, such research naturally lacks the technical basis.

The starting point for research is already the question “What is music?”. "How does music work?", "What does music mean?" And "What is the function of music?" (In advertising, in political contexts, in football stadiums, in disco ...) are further central questions, without which you can hardly make any statements about them how which music can and should be best conveyed and learned.

In addition to the training of practical musical skills in singing and playing instruments , the term “aesthetic education” has become important for music education. This takes music into account as an understanding of the world, as a culture , as a language and as a meaning in life. In turn, musical education is only possible - according to the prevailing doctrine of music educators - if musical experiences are made. Experiencing music includes music practice, feeling (or listening to ) music and thinking about music. Music should also be understood .

In the context of the public discourse on music education, reference is often made to the possible transfer effects of studying music. Transfer effects refer to the growth of non-musical cognitive areas through experiencing music pedagogy. The development of positive personality traits as well as the ability to work in a team and an increase in intelligence are just a few positive effects that can be ascribed to studying music. Results from research projects, in which proof of the promotion of non-musical areas of ability or of a positive influence of music pedagogy on personal development is to be provided, are partly disseminated via the media in a populist manner. In particular, the improvement of intelligence through the so-called Mozart effect was discussed several times in public. According to the current research topic, the transfer effect is controversial. There are systematic studies that do not find anything like this and others that come to positive results. For example, improvements in verbal intelligence and executive functions could be observed. In addition, there are indirect transfer effects on the functional plasticity of the brain. Music lessons, as an extracurricular activity, seem to have an impact on critical - and logical thinking. From a music pedagogical point of view, it is generally doubted that transfer effects belong to the subject of music pedagogy: This deals with the effects on the learning of music.

The qualification to become a music teacher at music schools and other non-state educational institutions requires intermediate maturity . The course usually ends with a bachelor's or master's degree, and in some cases it also ends - as was usual before the Bologna Process - with a university or state diploma. The prerequisite for working in the field of school music is the general university entrance qualification, i.e. Abitur , Matura or a comparable school leaving certificate as well as a teaching degree . Depending on the federal state , this ends with a state examination , a bachelor's or master's degree. In addition, music education can also be studied as a scientific degree at universities .

The proportion of non-subject lessons in German primary schools is currently (as of 2020) around 50%. That is why experts repeatedly call for uniform quality standards for newcomers. The failure of lessons means that disadvantaged students in particular hardly have a chance to come into contact with music, although this is a central building block for the personality development of adolescents. The German Music Council , the Conference of State Music Councils and the non-profit Bertelsmann Foundation are generally promoting more music lessons in German schools.