A Benedictine in the Abbey High School in Melk , around 1890 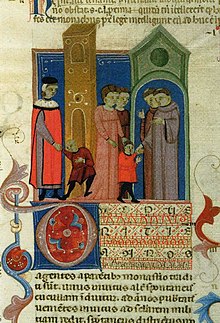 Boys on the way to the convent school. Bolognese manuscript of the Decretum Gratiani , mid-14th century

Convent schools had initially when they arise in the 6th century only the formation of religious priests but the goal was in the late Middle Ages also lay expanded. As a result, many gifted boys could be given a solid education by the local pastor.

According to legend, the founding of the monastery schools in the West is traced back to Benedict of Nursia , the founder of the Benedictine order († 547), and his contemporaries Cassiodorus . They gained significant momentum within the Frankish Empire under Charlemagne, notably through Benedict von Aniane . From that time on, the monastery schools were divided into exteriores , which were also open to those who wanted to remain lay people, namely Junkers , and interiores , for oblates ( pueri oblati ).

The Benedictines cultivated scientific instruction in particular in the British Isles and spread it from there during their missionary work across Europe, in Gaul , Spain and, through Boniface, also in the Germanic regions of the Frankish Empire. Since the 12th century, the Cistercians and the mendicant orders of the Dominicans , Franciscans and Carmelites , who also taught outside of the monasteries, appeared. Later came the Premonstratensians , the " Brothers of Common Life " donated by Gerhard Groote .

For a long time, monastery schools remained the only scholarly educational institutions in Germany alongside the similarly established cathedral or cathedral schools in the episcopal cities. The oldest German-speaking monastery schools, which reached their peak in Ottonian and Salian times, are Reichenau , founded in 724 , St. Gallen (middle of the 8th century), Niederaltaich (731 or 741), Fulda (748), Kremsmünster (777) , Melk ad Donau (985), Admont , St. Florian (1071) as well as Corvey , Hirsau , Prüm , the Schottenstift in Vienna and Hersfeld .

As early as the 11th century, many monastery schools fell into disrepair after reforms shielded them more from the outside world. In the growing cities the cathedral schools flourished, to which further parish schools ( parish schools under the respective pastor, also sexton schools with the assistant of the sexton) were added. The most demanding education went to the universities from the 13th century . An important school in transition was in Paris Saint-Victor with Wilhelm von Champeaux .

In the Catholic Church in the early modern period, the Jesuit colleges pushed the older Benedictine schools and the newer Barnabites and Piarists into the background. The schools of the mendicant orders continued to exist.

The monastery's own theological home teaching institutions focused their training on the theological area because they were already able to fall back on boys who had been trained in monastery schools.

In the Middle Ages, several women's convents operated educational institutions for the daughters of the nobility, not a few of whom reached a humanistic scholarly level as nuns . In modern times, other new congregations for the education of girls were founded, such as the Ursulines . The convent schools for girls in Catholic countries were used particularly by higher social circles. More recently, these schools have opened up socially, but currently all of the congregations involved in education are suffering from a shortage of offspring.

In some countries that joined the Reformation , the income from several monasteries and cathedral donors was used to found schools for scholars, which are still called monastery schools , cathedral schools or princely schools . Whole monasteries were also converted into schools. In Saxony , for example, the schools in Schulpforta , Meißen and Merseburg were established (later moved to Grimma ); in Thuringia the school in Roßleben ; Ilfeld belonged to Hanover as an exclave until 1866 . In Württemberg, after the Reformation, the fourteen remaining monasteries, with one exception, were also converted into monastery schools through the monastery order issued in 1556 . Of these monastery schools, only the Maulbronn and Blaubeuren Evangelical Seminars still exist today .