Grimma is a large district town in the Leipzig district . The medium-sized town in the valley of the Mulde is the fourth largest city in Saxony by area . It was first mentioned in a document in 1200, the area only grew through numerous incorporations in the 20th and 21st centuries. The historic old town also includes most of the parish's sights, and there are also many old sacred buildings in the 64 districts. 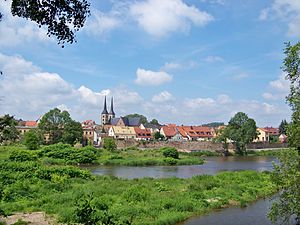 City view of Grimmas from the opposite bank of the Mulde

The Old Sorbian word "grim" means "low-lying terrain surrounded by water and wet meadows". This term was also used for the settlement. Already known as "Grimme, Grymme" in 1160 and "Grymm" in 1243, the "a" has been used as the end of a word since the 16th century in the course of the development of the language of the office.

The city is located in the North Saxon plateau and hill country 25 km southeast of Leipzig and approx. 16 km south of Wurzen in the valley of the river Mulde . With a total area of ​​around 217 km² - due to numerous incorporations in 2011 and 2012 - and around 30,000 inhabitants, Grimma is the largest city or municipality in the district of Leipzig and the fourth largest city in Saxony in terms of area.

The city of Grimma includes 13 localities with a total of 64 districts:

In addition to the city center, there are also the districts of Hohnstädt , Grimma-West and Grimma-Süd

The strategically good location on the Mulde prompted Margrave Otto the Rich to build a settlement in 1170 . So the first Slavic settlements arose before the first documentary mention from 1200. In 1220 Grimma received city ​​rights .

Meissnian margraves and the Saxon electors often resided in the castle. Albrecht the Courageous , the progenitor of the Saxon royal family, was born here. He therefore called himself Junker von Grym on his pilgrimage to Palestine . The first mention of the vigilante group Die Geharnischten in the Torgau , Oschatz and Grimma city union, which achieved historical fame in the Wurzen feud in 1542. The residents built the first permanent Muldenbrücke and developed a self-confident and enterprising middle class. In the 14th century, Grimma was in an economic boom. Even when the economic center of the region shifted more and more to Leipzig, Grimma has remained a flourishing location to this day.

Several state parliaments have been held in Grimma since 1440 . In the state parliament of 1458, Elector Friedrich the Meek founded the Leipzig New Year's Fair. Here negotiated 1511–1546 delegates from the two Saxon lines; Forty-year disputes over coinage and mining issues were settled through the "Grimmaische Machtspruch". (See also " Saxon coin separation ".)

In 1523 Katharina von Bora , who later became Martin Luther's wife , left the Nimbschen monastery near Grimma with other nuns .

The city brewery was founded around 1300 (Hildebrandt brewery since 1858, Frohberg brewery since 1872/1880, city brewery until around 1918). The name “Frohberg” comes from this brewery for one of the two widespread types of bottom-fermenting brewer's yeast ( Saccharomyces pastorianus or S. carlsbergensis ), the other type is named after Saaz (today: Žatec) (by Paul Lindner ).

In 1857 the Catholic Church of St. Trinity was consecrated.

The Pöppelmann Bridge destroyed by floods in 2009 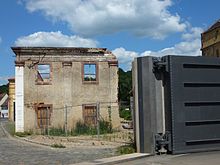 Flood protection gate on the ruins of the large mill

Memorial in memory of the 2002 flood

Numerous houses in the old town were destroyed or severely damaged by the flood on August 13, 2002 ; in the meantime, however, almost all of them have been rebuilt. The historic Mulde bridge was destroyed by the flood and was rebuilt in September 2009 using a flood-adapted construction method. It was opened to traffic again on August 19, 2012. A monument made of Rochlitz porphyry by Friedhelm Lach commemorates the flood disaster.

In May / June 2013, the rebuilt city was hit by a new flood catastrophe with similar consequences for the old town as in August 2002. The reconstructed Mulde bridge withstood the new flood wave, and the improved construction of the structure prevented the flood effects of the bridge from backwater compared to 2002 be decreased.

The damage caused by the two floods was in the three-digit million range: According to MDR information, the damage balance in 2002 was around 250 million euros; In 2013 it was another 150 million euros.

To protect the city, existing building walls were upgraded after 2013 and a free-standing flood protection wall with lockable gates and an underground cut-off wall as a bored pile wall were built.

The suburb of Amtshaus was incorporated into Grimma in 1872. The Nimbschen monastery followed in 1948. On January 1, 1952, Hohnstädt was incorporated. Three parishes were added in 1994. Großbardau followed in 2006. At the beginning of 2011, Nerchau with 14 districts after a referendum on June 6, 2010, Thümmlitzwalde with 21 districts after an unification agreement and the northern districts of Großbothen were added. On September 18, 2011, the citizens of Mutzschen and the associated districts decided to merge with the city of Grimma. This took place on January 1, 2012.

→ Main article : List of the incorporations in the city of Grimma

Exile on the Mulde: The Thomaner 1943–1945 in the Princely School of Grimma

During the Allied bombing raids on Leipzig on December 4, 1943, the alumni of the St. Thomas Choir in Hillerstraße was also badly damaged: a bomb hit made it impossible to live in; the Thomaner needed a new, safe home at short notice. How the contact to Grimma came about can no longer be precisely proven. One thing is certain: the very next day - Sunday, December 5, 1943 - Cantor Günther Ramin and his choir found shelter in the Mulde city: the Fürstenschule zu Grimma became an alternative . The accommodation, which was initially intended to be a temporary solution, turned into eighteen months. From Grimma, the Thomaner regularly traveled to Leipzig for their motet performances and to numerous appearances in many places in Germany.

On December 18, 1993, the Thomaner sang again in the Frauenkirche Grimma - with Bach's Christmas Oratorio they commemorated their concert in the same church with the same musical work exactly 50 years ago to the day and the year and a half when the Thomanern was home to the Mulde town.

Population development of Grimma from the end of 2003 to 2016

The city council is the municipal representative body of the city of Grimma. Every five years, citizens decide on the allocation of seats in a general, direct, free, equal and secret ballot.

Matthias Berger was confirmed in office in June 2015 with almost 90% of the votes.

Sister cities of Grimma are

Grimma town hall after the 2013 flood 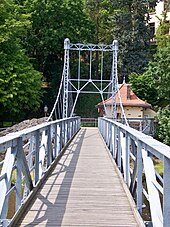 One of the most famous views of Grimma: The Grimma Monastery Church and the neighboring St. Augustin High School (architect: Hugo Nauck )

The main attraction of Grimma is the historic old town on the banks of the Mulde with numerous monuments from different epochs (see the following list). It measures around three quarters of a kilometer from south to north and half a kilometer from east to west. This makes it the largest old town after Leipzig both in West Saxony and in the former administrative district of Leipzig , the current administrative district of Leipzig .

Cenotaph for resistance fighters in the city park

A basketball tournament against racism and violence is taking place in the gym at the Seumehaus of the St. Augustin High School. The Grimma also hosts a CrossOver Festival for young people, the Germany Cup for amateur ice skaters in the GGI ice rink and, on an irregular basis, the Grimma flood of songs as an international music festival on the occasion of the floods in August 2002. The Grimma City Run is ten kilometers long with eight laps each 1.25 km. The "Klostermarathon", a mountain bike race, was organized by RV 99 Grimma until 2007. The Muldental-Triathlon is run by the Muldental-Triathlon e. V. organized. The cycle race "Around the Muldental" has also been held again for several years. The Muldentaler Städtelauf extends from Wurzen to Grimma, similar to the Mulde regatta. The Grimma City Festival is held annually by the Grimma Trade Association at the end of September / beginning of October. 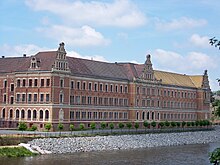 St. Augustin high school from the opposite bank of the Mulde

The city lies in the network area of ​​the Mitteldeutscher Verkehrsverbund (MDV) GmbH ; Grimma with its districts and the city of Trebsen / Mulde are in tariff zone 144. A connection to the rail network has existed since 1866. The Grimma Oberer Bahnhof station is on the Borsdorf – Coswig line . Until 1967 the lower station on the Muldentalbahn was also served; this line is closed today. The former route from Wurzen to Grimma has been expanded as a delightful bike path; it is also suitable for inline skiers. Großbothen train station has been in the political border since 2011. The Obere Bahnhof Grimma is today the traffic stop for the following line:

The Leipzig regional bus connects Grimma with eight PlusBus and other regional bus routes. City traffic is ensured by bus routes A and B. Both lines run Monday to Saturday, from 5 a.m. to around 9 p.m. every 30 minutes, then every hour until midnight. Hourly on Sundays and public holidays. In addition to the bus station at the upper station , the transition between train and bus traffic, Nicolaiplatz is also an important transfer point between city and regional buses.

On behalf of the city of Grimma, the Muldenschifffahrt Grimma GbR operates a shipping line with motor ships on the Mulde. This runs from March to October, every day from 10 a.m. to 7 p.m. every 60 minutes. The shipping line connects the landing stages Grimma, suspension bridge with Höfgen, Schiffsmühle and Nimbschen. A yaw ferry is also used between the banks of Höfgen, Schiffsmühle and Nimbschen .

The hospital is a house of standard care run by the district. Together with the hospital in Wurzen, it belongs to the Muldentalkliniken GmbH.

In the north the federal highway 14 crosses the city area; A direct connection to the city is given with the exit Grimma. The federal motorway 38 can be reached via the nearby Parthenaue triangle . In addition, the federal highway 107 runs through the city. Two-thirds of the B 107n bypass was completed between 2004 and 2008 and leads from the motorway in a north-westerly direction around Grimma. The construction of the third construction phase was stopped by the Federal Administrative Court after a lawsuit by NABU because the Klosterholz forest had been cut. A new route variant is currently (as of June 2015) being planned.

→ Main article : List of personalities from the city of Grimma

Parts of the municipality of the city of Grimma

Cities and municipalities in the district of Leipzig