This article describes the city in Bohemia. For the municipality in Moravia see Žatec na Moravě .

Žatec (German Saaz ) is a town in Okres Louny (Laun district) in Ústecký kraj (Aussiger region) in northwestern Czech Republic . Under the Bohemian King Ottokar II Přemysl , it was declared a royal town in 1265 , was given special privileges and was the administrative center of the Saatz district until 1848 . In 1868 Saaz became the seat of the district administration of the Saaz district .

The historic city center was declared an urban monument reserve in 1961 . Žatec is the center of a traditional hop-growing region and, thanks to the hop trade, is important for the Czech and foreign brewing industry.

The city is located on the right bank of the Eger above the confluence of the Hutná , about 48 kilometers east-northeast of Karlovy Vary .

Ringplatz with the town hall 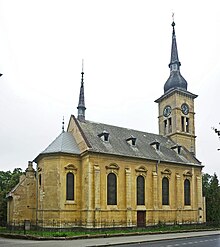 The fertile landscape of the Saaz Plain was inhabited from the earliest times. Prehistoric finds from this area, which are shown in the Saaz Regional Museum, prove this, they are pagan, without dating and are part of the history of Bohemia .

In historical sources it is first mentioned as (Latin) Urbs Satzi in the chronicle of Thietmar von Merseburg , when the German emperor liberated the Slavic castle from Polish occupation. The city was made a royal city in Bohemia in 1265 and was one of the most important administrative centers of the Kingdom of Bohemia in the Middle Ages. From the 15th century until the revolutionary year 1848 , Žatec was the seat of one of the 16, later 12, Bohemian districts . From 1714 to 1751 the neighboring Elbogen district ( Loketský kraj ) was attached to this Saatz district ( Žatecký kraj ) . From 1868 it had the status of a district town of the Saaz district in the Kingdom of Bohemia , from 1938 to 1945 of the Saaz district of the German Empire and from 1945 to 1960 of the Okres Žatec in Czechoslovakia .

Under the Bohemian King Ottokar I Přemysl , German settlers were called into the country from 1200 by locators who also settled in Saaz. After the attacks of the Czech reform movement of the Hussites around 1420, many Germans left the city again. Under the rule of George of Podebrady , the city confessed to Utraquism and was then essentially Evangelical-Lutheran until the Battle of the White Mountain (1620). As a participant in the Protestant uprising in Bohemia , Saaz mayor Maxmilián Hošťálek z Javořice (* 1564) was sentenced to death and executed in Prague in 1621. The city of Saaz lost numerous privileges.

As a result of the re-Catholicization in Bohemia as part of the Counter Reformation and the resettlement after the devastation of the Thirty Years' War , the proportion of the German-speaking population increased again, so that Saaz was a city with a predominantly German population until 1945. 1930 census: 18100 inhabitants (3156 of them Czechs).

Saaz came to the German Reich in 1938 through the Munich Agreement . In January 1945 Saaz belonged to the district of Saaz in the administrative district of Eger in the Reichsgau Sudetenland .

On May 10, 1945, the Red Army was in Saaz. There were murders, suicides, robbery and rape during the night. After the end of the Second World War, the German Bohemian population was largely expelled in 1945 and 1946 . According to the Beneš Decree 108 of October 25, 1945, their property and property were confiscated and placed under state administration in favor of Czechoslovakia . On June 3, 1945 soldiers of the 1st Czechoslovak Division under General Oldřich Španiel ordered around 5000 German men to assemble in the market square. All men between the ages of 15 and 65 were driven by the Svoboda troops to Postoloprty , 15 kilometers away . About 800 people died and the other men were taken away.

After 1945, Czechs from Central Bohemia and Moravia and Volhynian Czechs of Orthodox faith from Ukraine , so-called Czech repatriates , Slovaks and Roma, moved to Saaz. Through an administrative reform in 1960, the previous districts of Saaz , Podersam and Laun were combined to form Okres Louny . With this, Žatec lost the most important district authorities, such as the district administration and the district court, and became a simple town. During the Cold War decades , Žatec was an important location for the Czechoslovak People's Army .

Until 1945 Saaz was predominantly populated by German Bohemia , which were expelled.

See also: List of streets and squares in Žatec .

Churches that no longer exist in the neighborhoods

View of the city of Saaz

The historic city center was included in the list of urban monument reserves in the Czech Republic in 1961 .

During the founding period after the railway connection 1872–73, numerous factories were built in Saaz that no longer exist:

In addition to the hops trade, the city also achieved prosperity through the cucumber trade . The gherkin market was in the lower suburb in front of the Eger Bridge.

as well as in the new industrial area "Triangle" on the expressway R7 Praha - Chomutov :

Road traffic The place can be reached via the following roads:

→ Main article : List of personalities from the city of Žatec

Entrance to the former Jewish cemetery in Saaz

Jews immigrated to the royal city of Saaz by the 14th century at the latest, and their existence has been documented since 1350. There was a Jewish ghetto with a cemetery ("Judengarten") on the right bank of the Eger . In 1541 there was a pogrom against the Jews, they were expelled and their property was stolen. In a letter of grace in 1543, King Ferdinand of Bohemia confirmed that the city would no longer have to tolerate Jews. The expelled Jews settled in various surrounding villages, e.g. B. in Horschenz (Hořence bei Nezabylice ), Libotschan ( Libočany ), Liebeschitz ( Liběšice u Žatce ), Michelob ( Měcholupy ), Postelberg ( Postoloprty ) and Tscheraditz ( Čeradice )

The return of Jews from these surrounding villages to Saaz did not begin again until around 1850 due to the Jewish emancipation after the revolution of 1848/49. In 1868 the synagogue was moved from Libotschan to Saaz and a Jewish religious community was founded in Saaz. The Jewish cemetery on Trnowaner Strasse was opened in 1869 (with a ceremonial hall since 1902). The Saaz synagogue was built in Langgasse in 1871–72 according to plans by Johann Staniek and renovated in 1911. It is the second largest in Bohemia.

Around 1900 there were the largest number of Jewish residents in the city, about 1,300 Jews lived in Saaz. A strong emigration began in the 1930s. When the Sudetenland was incorporated into the German Reich in 1938, most of the Jews had already left the city, and the deportation of the last Jews in 1942 marked the end of the Jewish community. The synagogue was partially destroyed in 1938, but then used again as a hospital and after the Second World War as a storage room. After the renovation in 2008, it is now used as a cultural center, as there is no longer a Jewish community in Saaz.

Services were held in the building next to the synagogue until 1954.

Important members of the Jewish community in Saaz

Johann Wolfgang von Goethe was a total of three times in Saaz, namely on the

The Austrian composer Panos Kirkor has a. a. composed two piano pieces about the city of Saaz:

Legend: In 2001 a grave was discovered on the Ringplatz in Saaz, in which a skeleton, the remains of a wooden barrel and a small clay tablet with seven notches, which was called the "oldest beer bill in the world", was found. This plaque, interpreted as a memorial plaque to the "oldest beer drinker in the world", became the logo of the Temple of Hops and Beer Association .

The Saaz Hop Festival (called Dočesná or Chmelfest - a combination of the Czech chmel for "hops" and the German festival ) takes place in September at the end of the hop season.

In the city u. a. Recordings made for the following films: