Louny (German Laun ) is a city in the northern Bohemian Aussiger region . The district town on the banks of the Eger has 18,476 inhabitants (2014) .

Excavations in the eastern area of ​​the city showed that there was a Celtic settlement there. Later settled Marcomanni in the territory of the city. Excavations as well as finds prove their settlement. The first evidence of Slavic settlement comes from the 6th century. The name of the city is said to be derived from a first name Loun or Luni / Louni.

Louny was first in 1088 in a property list of King I. Vratislav listed. In 1115 the town was mentioned as the property of the Kladruby Monastery . In 1186 the city was listed in a document from Prince Friedrich . The royal city was founded by Přemysl Ottokar II in the 1260s east of the original settlement.

The city was on the trade routes from Prague to Dresden and from Nuremberg to Dresden. The travelers had to use the secured roads and spend the night in the respective cities and pay road tolls. There was a ford through the Eger, which was usable until the high tide. Later a bridge was built over the Eger and the polder . This served the king and the city as a secure source of income, because commercial travelers had to move their goods on the trade routes. The district founded by Ottokar II is located on a natural hill, because it happened and is still the case today that floods flood the still existing polder, which is now the park and exhibition area.

The previously existing older settlement area of ​​the suburb was demolished in the 1970s. In place of the old settlement there are now prefabricated buildings . Only the oldest church in the city and the cemetery have been preserved. Many buildings from the 14th to 16th centuries were demolished, including the bathhouse with its own mineral spring. This is now under a street and is inaccessible, the spring water is directed into the Eger.

During the Hussite movement , the city was one of the restraints of the Hussites, during which time many Catholic institutions, such as a monastery in the city, were destroyed. The walls of the monastery have been partially preserved and are now used as walls for other buildings. The remaining historic city center has been preserved despite the many fires and destruction in the past.

In 1813 during the Battle of Dresden Louny was a hospital town. The still existing hospital as well as all hotels and hostels served as military hospitals. Mainly the soldiers and officers of the Russian Tsar were treated in Louny. According to legend, Tsar Alexander I came to Louny personally to make atonement to Jean-Victor-Marie Moreau .

At the end of the 19th century, the state railway lines Prague – Brüx, Laun – Rakonitz – Beraun, Laun – Postelberg and Laun – Libochowitz were built. The city became the seat of a district administration and a district court.

Around 1900 there were 10,212 inhabitants in the district town. There were sugar factories, a beer brewery, a metal goods factory, a pottery factory, and railroad repair shops. 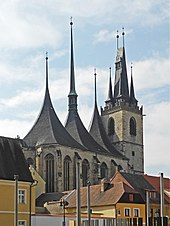 In addition to the existing Czech companies, mainly Japanese companies have settled in the town of Louny as well as in the surrounding area. With around 3,500 jobs, these are the largest employers and investors in the region. Foreign specialists and workers also moved to Louny and the surrounding area. As a result, there was economic tourism, primarily from Japan, Italy and Germany.

Agriculturally, the town and its surroundings ( Okres Louny ) are traditionally known for the cultivation of high quality hops . In Louny, there was also a well-known beer brewery, Pivovar Louny , which was taken over by Heineken in 2008 and closed at the end of 2010.