The former Benedictine Abbey of Kladrau

The monastery Kladruby (German Monastery Kladruby ) is a former Benedictine - Abbey and is located in the city Kladruby in tachov district in the west of the Czech Republic . It was dissolved in 1785 as part of the Josephine Reforms . The monastery church of the Assumption in Baroque Gothic style is one of the largest church buildings in Bohemia and is now a national cultural monument in the Czech Republic.

former abbey church of the Assumption 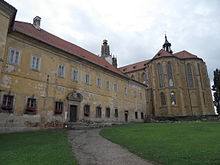 The monastery was founded in 1115 by Duke Vladislav I and his wife Richenza von Berg in the river valley of the Úhlavka in the west of Bohemia during the Roman Catholic colonization in the surrounding settlement area of ​​the West Slavic Chodi , provided with the income from the loyal places and by the order the Benedictines settled with monks from Swabia. He also donated land to the monastery in the area of ​​Bohemian Aicha (Cesky Dub) in northern Bohemia , whose manor was sold on by the Benedictines in 1234. The founding document of the Kladruby Monastery from 1115 is said to be a subsequent forgery from the end of the 12th century, which was used to create written evidence of the extensive manors of the monastery and its income.

During the attacks of the Hussites under the general Andreas Prokop , the Romanesque basilica in Kladrau was burned down and the abbey plundered. In the 17th century, during the re-Catholicization of Bohemia, a Roman Catholic pilgrimage site developed in the monastery for a few years , which did not last because the abbey was again affected in the Thirty Years' War . In the early 18th century and the return of the large estates, the reconstruction took place. The abbey church, which was destroyed to the ground, was rebuilt according to plans by the master builder Johann Blasius Santini-Aichl and completed in 1726 as the most important building of the Baroque Gothic, an interesting phenomenon within the Central European Baroque , to be interpreted more in terms of humanities and religious studies than architectural history. Since then, the building has been visible from afar and rises from the wooded surroundings. Inside there are numerous altars, a choir stalls and a pulpit, created by Cosmas Damian Asam in 1726–27 ; the vault of the 83-meter-long interior is dominated by a high dome.

After the Benedictine abbey was dissolved in 1785 by Josephinism in favor of a religious fund, the buildings served various purposes, they were a hospital, barracks and house for the disabled. In 1825 Prince Alfred I zu Windisch-Graetz bought the monastery and the associated manor for 275,500 gold pieces, although part of the purchase price did not have to be paid because of his services to the Austro-Hungarian monarchy . In Kladruby, a brewery was built in the former monastery in 1864. In the revolutionary year of 1848 which ended serfdom of the villagers.

After the end of the First World War, the princes Windisch-Graetz lost numerous lands in the course of a land reform in Czechoslovakia , but kept the family headquarters in Tachov in western Bohemia . Ludwig Aladar Prince of Windisch-Graetz moved after he had his uncle Alfred III. zu Windisch-Grätz had inherited, to Kladruby and set up an extensive library and a family archive there. From 1938 to 1945 Kladruby was part of the German Empire. In 1945 the entire property of the Windisch-Graetz family in Czechoslovakia was confiscated. The former Kladruby monastery has been state-owned since then and can be visited.

The abbey church was built as a Romanesque basilica in the 12th century. The current appearance in the style of Bohemian Baroque Gothic was designed by the master builder Johann Blasius Santini-Aichl in the years 1712 to 1726 . On the south side is a part of the former convent and the prelature , in the south the new convent, designed by Kilian Ignaz Dientzenhofer . The interior of the church was designed by the brothers Cosmas Damian and Egid Quirin Asam and the sculptor Matthias Bernhard Braun .