The title of this article is ambiguous. More can be found under Sudetenland and Sudetenland (province) . 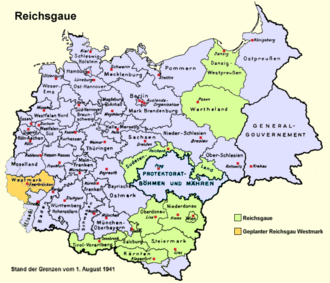 The Reichsgau Sudetenland ( Czech Říšská župa Sudety ) or abbreviated Sudetengau ( Czech Sudetská župa ) was formed from most of the areas of Czechoslovakia incorporated in 1938 and existed in the German Empire from 1939 to 1945. The administration of the territory was headed by the Reichsstatthalter Konrad Henlein . The Reichsgau Sudetenland was divided into the administrative districts of Eger , Aussig and Troppau and covered 22,608 km² in October 1938 and 29,140 km² in December of the same year as a result of further area corrections.

With the restoration of the territory of Czechoslovakia after the end of the Second World War , the history of the Reichsgau Sudetenland ended.

The Sudeten German territory of Czechoslovakia was awarded to the German Reich by the states participating in the conference as a result of the British-French appeasement policy against the will of the Prague government in the Munich Agreement of 1938 . From October 1 to October 10, 1938 around 24 divisions of the Wehrmacht occupied the areas of Czechoslovakia bordering Germany and the former Austria. The new borders of the German Reich were not drawn according to the real or alleged population composition of the annexed areas, but according to economic and strategic aspects. The specific territorial definition was made by the “Berlin Committee”, in which the foreign ministers of the signatory states Germany, France , Great Britain and Italy were represented. The result was announced in the German-Czechoslovak border agreement of November 21, 1938. With these areas, Czechoslovakia lost a third of its population, its main industrial facilities and all of its border defense systems .

Immediately after the German invasion, the army received executive power . The five Army Group Commands involved initially deployed chiefs of the civil administrations (CdZ) until on October 1, 1938 Konrad Henlein was appointed " Reich Commissioner for Sudeten Germany". The CdZ organizations were poorly planned and did not prove themselves. They were faced with a power struggle between individual imperial authorities and had to be asked to stay in office for an additional week because Henlein's civil administration was not yet operational. Henlein was able to easily remove the influence of the military commanders through his direct access to Adolf Hitler . On October 20, 1938 the executive power of the army ended and Henlein took over the administration as Reich Commissioner.

The Czech population in January 1938 was around 319,000. In October 1938 193,793 Czechs (= 60.75%) took German citizenship in order to be able to remain in their homeland. The Czechs, who no longer wanted to live under German rule, were resettled to the Czech-Slovak Republic ( Protectorate of Bohemia and Moravia from March 1939 ). Both the German state and many German private individuals appropriated their property after compensation payments had been made. However, the Germans only paid a minimum amount to those affected.

The seat of office became the North Bohemian Reichenberg (Liberec), at the same time the seat of the governor. Shortly thereafter, the city was given the name “Gauhauptstadt”. The previous Reich Commissioner Konrad Henlein was appointed Reich Governor and Gauleiter in Reichenberg.

After the “Sudetengaugesetz” laid the foundations for the new authorities, the previous associations were broken up. Nazi organizations recorded the population. The Sudeten German Party (SdP) was absorbed into the National Socialist German Workers' Party (NSDAP). All other parties were banned.

In May 1945 the Red Army and the US Army took control of the rest of the territory of the Czech Republic, including the Sudetenland, that had not yet been conquered by the anti-Hitler coalition . In the period that followed, a new Czechoslovak government took over the administration and began to expel the German population. 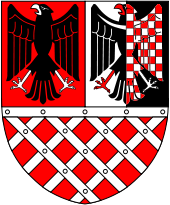 On September 9, 1940, the Reich Ministry of the Interior awarded the Reichsgau Sudetenland a coat of arms, which was reminiscent of the historical parts of the Gau area and was also intended to help justify the alleged "reunification" of these parts of the Bohemian countries with the (Greater) German Reich . This coat of arms is described as follows:

The ( heraldic ) upper right field showed the Premyslid eagle coat of arms , which was used by the Bohemian dukes and first kings until the middle of the 13th century , in a slightly different color . This symbol indicated the fiefdom of the Bohemian rulers from the Roman-German Empire. The (heraldic) upper left field contains (also with changes in the color scheme) the Silesian and Moravian eagles. The inclined grid in the lower field was a symbol of the former imperial city of Eger .

The city of Karlovy Vary was designated the provisional seat of the Eger administrative district . Incidentally, the seats of the other districts were in Aussig and Troppau.

In general, the official German-language names from the time of the first Czechoslovak Republic continued to apply. Renaming of locations only took place in a few exceptional cases. For example, the municipality of Dobrzan was given the new name Wiesengrund in 1939 .

Administrative map of the Reichsgau Sudetenland