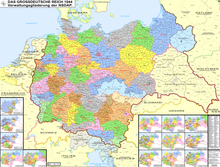 The Munich-Upper Bavaria Gau was an administrative unit of the NSDAP that existed from 1930 to 1945. The ruling Gauleiter was Adolf Wagner until 1942 . As the region of origin of the "NS movement", the Gau claimed a special position as a "traditional district". 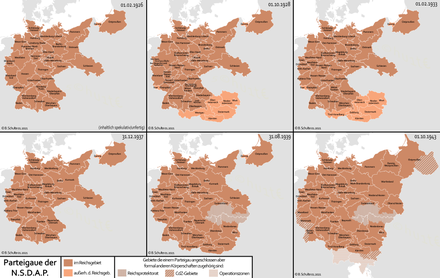 Adolf Wagner, appointed head of the Gau Oberpfalz in 1928, also supervised the Gau Greater Munich from 1929 , which was formed in 1929 from the Munich local group and the Munich district (headed by Hermann Esser from 1925 ). After it was merged with the Gau Oberbayern (since 1928 under the direction of Fritz Reinhardt ) on November 15, 1930 in the Gau Munich-Oberbayern, which was largely congruent with the administrative district of Upper Bavaria , he became Gauleiter in 1930. From November 1933 he was a member of the Reichstag constituency 24 .

Wagner organized a Gauleitung like the Reichsleitung of the NSDAP up to June 1931 in five departments: the organization departments I (with the subdivisions company cell and trade union questions, middle class issues and war victims questions) and II (subdivisions agricultural policy, financial and economic policy, cultural policy and social policy), in the Propaganda, press and the treasury departments. Then the local groups should also take over this structure. In the Gau newspaper “ Die Front ” on January 1, 1932, Wagner assigned the “party apparatus of universal responsibility” a model character: “Today, the organization of the Gau is almost the finished mirror image of the coming National Socialist state.” It was not until 1932 that additional district leaderships were established Organization added, which increased the need for staff considerably. In the "Party Statistics" of 1935, the Gau was divided into 26 districts, 249 local groups, 144 bases, 1,291 cells and 4,258 blocks, in which a total of 9,600 political leaders, including 412 high officials, worked. With only 3.32% party members (= 58,677) of the total population of its territory (= 1,767,655), the Munich-Upper Bavaria district in 1935 was still in the lower third of all districts in the Reich. In 1934, the Gauleitung had its seat in the former state parliament building at Prannerstrasse 20, which had been converted into the "House of the National Socialists" (previously in a garden house at Barer Strasse 14 from 1931). However, Wagner resided in his representative villa at Kaulbachstrasse 15.

The day-to-day business of the Gau management was in the hands of the former Gau managing director and deputy since 1933 Otto Nippold. The Gauredner and Starnberg First Mayor Franz Buchner MdR was temporarily Gauinspector and from 1933 to 1936 Gau trainer, he also headed the Gauamt für Kommunalpolitik. A Gauschulungsburg existed in Schloss Niedernfels near Grassau . Regional economic advisors were Hans Buchner and the industrialist Alfred Pfaff . “Führer receptions”, “Führer rallies” and “Führer appeals” on the occasion of Hitler's visits, as well as the visits of the Italian head of state Benito Mussolini in 1937, 1938 and 1940 gave the opportunity for self-expression. Self-created political-ideological exhibitions also served this purpose: “Anti-Bolshevik Show” (1936), “The Eternal Jew” (1937), “Robbery England” (1939), “We too are fighting for victory - working homeland alongside those who are fighting Front "(1940)," Book and Sword - A Symbol of Our Time "(1940) and" People at War "(1941). One of the objects of prestige were the "district days" introduced in 1936, which, as "confession days", were intended to strengthen a connection between the party leadership, the party base and the people. The eugenicist Heinz Kürten was from 1934 to 1944 the commissioner and district manager of the Racial Political Office . From 1935 to March 1939 the astronomer Wilhelm Führer worked as a Gaudozentenbundführer .

In 1933, Ritter von Epp was appointed Reich Governor in the Free State of Bavaria , to whom six Bavarian Gauleiter were subordinate. On April 12, 1933, the Lord Mayor of Lindau , Ludwig Siebert, was appointed Prime Minister of Bavaria . Wagner became State Commissioner and Acting Minister of the Interior in March 1933 , Acting Minister of the Interior and Deputy Prime Minister in April 1933, and Bavarian Minister of Education in December 1936. On his initiative and in cooperation with the provisional police president of Munich, Heinrich Himmler , the Dachau concentration camp was built in March 1933 for primarily communist and social democratic prisoners .

At the beginning of the war in 1939 he was the only Gauleiter to be appointed Reich Defense Commissioner in two military districts (Munich and Nuremberg). In June 1942 Wagner suffered a stroke, did not recover and died on April 12, 1944. Paul Giesler took over the offices first as a deputy and then finally . In 1944 he appointed the administrative specialist and SS member Friedrich Siebert , the son of the Prime Minister who died in 1942, as deputy Gauleiter.

Gauleiter in the Gau Oberbayern was

Gauleiter in the Gau Greater Munich was

Gauleiter in the Gau Munich-Upper Bavaria were