The Reichsgau Danzig-West Prussia was a Reichsgau of the German Empire from 1939 to 1945 . It was formed after the invasion of Poland in 1939 and consisted mainly of state territory that had been German until 1920, which, due to the provisions of the Versailles Treaty , had to be ceded in 1920 on the one hand for the purpose of establishing the Polish Corridor and on the other hand for the establishment of the autonomous Free City of Danzig from further Polish territory that had belonged to Congress Poland before 1918 , as well as from the territory of the former West Prussian government district of the PrussianEast Prussia Province .

Danzig-West Prussia was mainly based on areas that had been Prussian since the partition of Poland (partly interrupted by the Duchy of Warsaw from 1807 to 1815 and the period from 1918), but only partially coincided with the former province of West Prussia .

After the invasion of Poland, the Free City of Danzig was incorporated into the German Reich on September 1, 1939 . Gauleiter Albert Forster from Danzig was appointed head of civil administration .

In the middle of September 1939 the German "Military District West Prussia" was created; this included the area of ​​the Polish Voivodeship Großpommerellen ( Województwo Wielkopomorskie ) to the network including the districts of Lipno and Rypin, which belonged to the Warsaw Voivodeship until April 1, 1938 . In the west and east it bordered the old German imperial border from 1937/39 (the Prussian provinces of Pomerania and East Prussia ), in the north on the former Free City of Danzig and in the south on the " Military District of Posen ". Gauleiter Forster from Danzig became the head of civil administration in the West Prussian military district.

On October 26, 1939, the "Military District West Prussia" was merged with the former Free City of Danzig and the West Prussian government district of the Prussian province of East Prussia to form the newly created Reichsgau West Prussia . However, the area did not come to the German state of Prussia as a new province , but was incorporated directly into the German Empire as Reichsgau . The Polish areas of the Reichsgau were thus annexed; this annexation , which is contrary to international law, is legally to be regarded as "ineffective from the start". 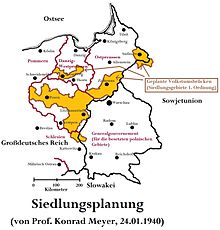 Since November 2, 1939, the Reichsgau has been known as "Danzig-West Prussia" in order to keep the tradition of the former Free City of Danzig in its name. The administrative seat was the city of Danzig, which had been known as the “ Hanseatic City ” since December 30, 1940 , and the Reichsstatthalter in Danzig was the previous head of civil administration, Albert Forster.

By the end of 1939, the Volksdeutsche Selbstschutz under Ludolf-Hermann von Alvensleben had murdered around 20,000 residents in the area of ​​the new Reichsgau.

In order to make room for ethnic German resettlers , who mainly came from the Baltic States , the National Socialist Central Immigration Office arranged for thousands of Poles to be expelled or deported from the area of ​​Gdansk-West Prussia.

Towards the end of the war, the area was occupied between January and May 1945 by the Red Army on their advance towards the mouth of the Vistula .

The cities of Bromberg , Danzig and Marienwerder were designated as the seat of the administrative districts .

To simplify the administration, the authority of the district president in Danzig was merged with that of the Reich governor in Danzig-West Prussia on January 1, 1943. The Reichsgau Danzig-West Prussia thus formed an integral part of the German Empire until 1945. However, he had a special position insofar as he remained separated from the old Danzig and Reich territory by a police border (with a mandatory pass). This was supposed to ensure that there was no uncontrolled fluctuation of the population in the Altreich. Thus, this police border ran right through the Reichsgau, so that a complete integration - without mandatory pass - only took place with regard to the Gdansk area until 1939.

In addition, all state special administrations were subordinate to the Reichsstatthalter in Danzig with the exception of the Reichspost and the Reichsbahn . This was particularly true of the judiciary. This should allow the Reichsgau to be used as an "experimental field".

On January 1, 1940, all municipalities of the former Free City of Danzig were awarded the German municipal code. At the same time, the cities that were already outside of a district association under Polish law were recognized as urban districts under German law. They, too, were awarded the German municipal code, which provided for the implementation of the Führer principle at the municipal level. On April 1, 1940, administration by German official commissioners was introduced in all other municipalities. On October 24, 1940, new administrative districts were formed throughout the entire Reichsgau area .

The first county's municipalities, which the German church order was awarded on September 1, 1940 were the cities Tczew , Konitz , Neustadt (Westpr.) , Starogard and Puck in the counties Tczew , Konitz , Neustadt (Westpr.) And Starogard , the last of the 11 parishes in the " Koschneiderei " (district of Osterwick, Kr.Konitz) in the district of Konitz on April 1, 1944.

By unpublished decree of December 1939, the German place names valid until 1918 were provisionally valid with regard to the previously Polish place names. This global renaming was possible because the entire German map series for the areas ceded to Poland in 1920 (also) continued to use the earlier German place names. For the Polish areas east of the imperial border from 1918, the previous Polish names continued to apply.

In 1942, by order of the Reich Governor with the consent of the Reich Minister of the Interior, all place names were specified in a German form. Conversely, during the period from 1466 to 1772, when West Prussia had been under the sovereignty of the Polish crown in the form of the autonomous Prussian royal portion , numerous place names from the time West Prussia belonged to the Teutonic Order were Polonized .

In Danzig-West Prussia there were initially two higher regional courts . The former Danzig higher court had been transformed into the higher regional court and became responsible for the district courts Bromberg, Danzig , Graudenz, Konitz and Thorn with the corresponding number of local courts. The area of ​​the East Prussian part of the Reichsgau until 1939 still belonged to the district of the Higher Regional Court in Marienwerder with the Regional Court of Elbing.

As in the German Empire, there were also special courts in Danzig, Elbing, Graudenz and Thorn.

The distinguishing mark for motor vehicles registered in Danzig-West Prussia was DW .