The province of Pomerania , located in the north German lowlands , was the Prussian province formed from the Duchy of Pomerania in 1815 after the Congress of Vienna . It consisted of the west of the Oder located Pomerania and Pomerania . Pomerania's capital was Szczecin .

As national anthem , the had Pommernlied established. It was created around 1850 and goes back to the theologian and poet Adolf Pompe .

In the Second World War , after the conquest of Pomerania , the Soviet Union surrendered the areas east of the Oder-Neisse line to the People's Republic of Poland in 1945 . The western allies confirmed this in the Potsdam Agreement .

After an area of ​​6.64 km² in size, which previously belonged to the eastern districts of Bütow, Lauenburg and Stolp and had a total of 224 inhabitants in 1910, had to be ceded to the Polish Pomeranian Voivodeship , the area became due to the Versailles Treaty of 1919 the province of Pomerania, without the Szczecin Lagoon, the Bodden and other parts of the sea, in 1925 with 30,208 km² and the population with 1,878,780.

See also : List of places in the province of Pomerania

Through the Peace of Westphalia in 1648, Hinterpommern became part of Brandenburg and Vorpommern became Swedish Pomerania . Although the Brandenburg Elector Friedrich Wilhelm I succeeded in conquering all of Swedish Pomerania in 1678, under pressure from France in the Peace of Saint-Germain (1679), he had to forego most of the conquered territories. After the end of the Great Northern War (1700–1721), the part of Western Pomerania south of the Peene became part of Prussia ( Old Western Pomerania ). With the territorial reorganization of Europe in 1815, the part of Western Pomerania that was last Swedish, with the island of Rügen, also became Prussian ( New Western Pomerania ). At the same time, Pomerania received the Dramburg and Schivelbein districts and the northern parts of the Arnswalde district with the town of Nörenberg von der Neumark , which otherwise remained with the Province of Brandenburg .

In the last democratic Reichstag election in March 1933 , the NSDAP in Pomerania achieved the second largest share of the vote in a constituency of the German Reich with 56.3% after East Prussia . Together with the votes of the DNVP , 73.3% of the electorate voted for right-wing extremist parties. The highest value in a constituency. For comparison: In the constituency of Cologne-Aachen, all right-wing extremist parties achieved 35.7%.

From March 1945, Western Pomerania, including the area around Stettin, was placed under provisional Polish administration , but was de facto administratively incorporated into the Polish state. The residents were driven out ; Eastern Pomerania, which was settled with Poland from 1945 , has also belonged to Poland under international law since 1992 . The remaining part of Western Pomerania became part of the Soviet occupation zone in 1945 . The history of the Prussian province of Pomerania ended with the formation of the state of Mecklenburg-Western Pomerania in early July 1945. The GDR recognized the new border with Poland diplomatically as early as 1950, the Federal Republic of Germany indirectly in 1972 and finally only with the German-Polish border treaty . 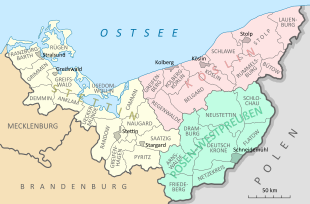 Administrative division of Pomerania in 1939

During the period of National Socialism extensive reorganisations took place. On October 1, 1938, the boundaries of the Prussian province of Pomerania were redrawn: The province of Grenzmark Posen-West Prussia was dissolved and, with most of its districts, integrated into the province of Pomerania as the new administrative district Grenzmark Posen-West Prussia, based in Schneidemühl . In addition, the districts of Arnswalde and Friedeberg (Neumark) from the province of Brandenburg and the Pomeranian districts of Dramburg and Neustettin were incorporated into the new administrative district.

The province of Pomerania underwent a final change in its district structure in 1939 with the Greater Stettin Act : The district of Randow was completely dissolved and its communities were assigned to the surrounding districts, which primarily increased the urban district of Stettin (see district of Randow # Cities and Towns 1939 ) .

In addition to the urban district of Szczecin , which already existed in 1816, the following additional urban districts were created over time:

Administrative division of the Province of Pomerania 1945

As of 1945, the province of Pomerania was structured as follows: 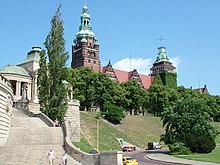 Building of the government of the administrative district of Szczecin on the hook terrace in Szczecin, today the seat of the West Pomeranian Voivodeship Administration

With the Prussian administrative reform (1815), the office of Upper President was created with its seat in Stettin. By 1945, Pomerania had 15 high presidents:

Development of the railway network

The province of Pomerania was largely developed by the Berlin-Stettiner Eisenbahn-Gesellschaft (BStE), which opened its first line from Berlin to Stettin in 1843 and on to Stargard in 1846 . Here the Stargard-Poznan Railway Company joined in 1847 . In 1851/52 it was transferred to the state Prussian Eastern Railway , whose first main line began in 1851 in the then West Prussian Kreuz and led via Schneidemühl to Bromberg . The connection from Frankfurt (Oder) came about in 1857. From Schneidemühl it went on in the direction of Konitz - Dirschau . Further branch lines and cross connections with the Neustettin junction followed in 1877/78.

1878 Subsequently, the Hinterpommersche Eisenbahn, part of the network of the Berlin-Stettiner Eisenbahn-Gesellschaft, was taken over by the state and incorporated into the Royal Railway Directorate of the Eastern Railway; as early as 1859 it had continued the railway line from Stargard to Köslin along with a Belgard - Kolberg branch and in 1869/70 reached the west Prussian capital Danzig via Stolp .

In 1863, the Berlin-Stettiner Eisenbahn-Gesellschaft ran routes from Stettin and Angermünde to Western Pomerania , west of the Oder , which united in Pasewalk and ended via Anklam - Greifswald in Stralsund . From 1877/78 the Berlin Northern Railway , a railway line via Neubrandenburg and Demmin, also led there .

The main route along the Oder between Küstrin and Stettin was built in 1876/77 by the Breslau-Schweidnitz-Freiburg Railway Company .

In the following years, the Prussian State Railroad took over all of these private railway companies and added branch lines to them.

In addition, just in Pomerania - after the creation of the legal requirements - numerous small railroad companies emerged in many districts up to the First World War , in which the state, provinces, districts, cities and private interested parties - mostly Lenz & Co GmbH as a builder and operator - were involved were. You opened up with z. T. narrow-gauge railways of simple construction the rural areas. From 1910 they united to a joint management under the direction of the small railway department of the provincial association, since 1937 in the state railway directorate Pomerania . Finally, in 1940, all small railways were brought together in a public corporation under the name Pommersche Landesbahnen .