The partitions of Poland 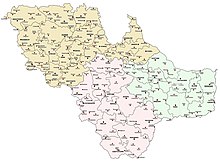 Administrative map with the chamber departments, counties and cities, 1795–1806

South Prussia was a province of the State of Prussia in the regions of Greater Poland and Mazovia , which existed from 1793 to 1807 . It was built on most of the areas annexed during the Second Partition of Poland and included the previous Polish voivodeships of Brześć Kujawski , Kalisch , Łęczyca , Płock , Posen , Rawa and Sieradz .

Two years after its creation, the city of Warsaw and its western environs were added to the young province during the Third Partition of Poland in 1795 , while the briefly South Prussian areas northeast of the Vistula around Plock changed to the Province of New East Prussia formed by the Third Partition .

Like the Province of Silesia, South Prussia was not subordinate to the General Directory in Berlin ; this is clear from the fact that both provinces were initially subordinate to the Count von Hoym , who had to present the king directly on their affairs. There was no provincial capital from 1793 to 1807. Administrative centers were the seats of the war and domain chambers in Posen, Kalisch (first in Petrikau), Płock (until 1795) and Warsaw (additionally since 1795); The “governments” were also located in these places as the upper judicial authorities, and their districts were cut exactly the same. For the internal and financial administration, administrative districts for the rural areas and (tax council) inspections for the supervision of the cities were set up.

The area was approx. 53,000 km², the population about 1.4 million, the vast majority of the new subjects spoke Polish. Besides Warsaw and the former voivodeship seats, Petrikau and Gnesen were important cities . Łódź , which is important today, was then a small town with fewer than 1000 inhabitants, which they even wanted to revoke of its city rights. A small part of the territories that came to Prussia in 1795 was called " New Silesia " and, with regard to internal administration, was incorporated into the Wroclaw Chamber of War and Domains. Judiciary and judiciary were - because of the still applicable regulations from Polish times - in the two districts of Pilica and Siwierz supervised from Kalisch.

From 1798, King Friedrich Wilhelm III promoted. of Prussia especially the German (non-Prussian) immigration to South Prussia and New East Prussia. Immigrants on aristocratic lands were called Hauländer , while those on official royal lands were called colonists. The Prussian captain Friedrich Magnus von Nothardt played a central role in this colonization . From 1798 until his death at the end of 1804 he was in charge of the recruiting of colonists for South Prussia, played a key role in drawing up the settlement conditions and the plan for recruiting colonists from the Reich, which had been developed since mid-1799 . From 1800 he worked as an advertising officer in southern Germany, where he had a permanent advertising office, first in Öhringen near Heilbronn , and from 1804 in Crailsheim ( Ansbach ). Due to his successful recruiting and the establishment of numerous Swabian settlements , he was retired as major on November 26, 1804 to become chamber director at Kalisch, which was no longer due to his early death at the age of only 38 years. The collapse of Prussia in 1806/07 finally brought colonization efforts to a complete standstill.