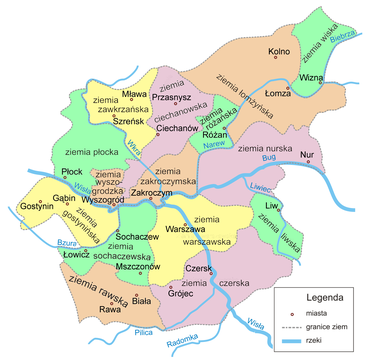 Masovia ( Polish Mazowsze [maˈzɔfʃɛ]) is a historical landscape in Poland that extends around Warsaw , historically predominantly east of the Vistula . Masovia was part of the early Piast state , then as a duchy under a Piast dynasty, temporarily connected to the Kingdom of Poland only as a fief, then one of the (historical) voivodeships of Poland and today voivodeship again. Warsaw has been the political center of Mazovia since the 15th century. Before that, Czersk was the seat of government, and before that the episcopal city of Płock .

The name Mazovia is traced back to Masos or Maslao , i. H. Cupbearer of Mieszko II. Lambert († 1034), who appropriated this area after the death of the king while Kasimir I was a minor . It is not known exactly when Mazovia came under the rule of (Greater) Poland. A point in time is assumed between 960 and 990, i.e. during the reign of Mieszko I. Since then it has belonged to the state of the Piasts and formed one of the provinces with the center in Płock (since 1075 bishopric).

Coat of arms of the Duchy of Mazovia

Czersk on the Vistula, former residence of the Dukes of Mazovia
→ Main article : Duchy of Mazovia

As a result of the will of Bolesław III. After his death, Wrymouth , Poland was divided into duchies, which were only connected to one another worldly through the primacy of the senior duke. The 150 years of Polish particularism began. Based on this will, Mazovia was united with Kujawy and the country of Sieradz - Łęczyca to form a duchy around 1138 . During his reign from 1199 to 1247, from 1229 to 1232 and from 1241 to 1243, Duke Conrad I of Mazovia also held the Duchy of Lesser Poland and thus the office of Polish Senior Duke. His attempts to subjugate the neighboring Pruzzen and Jadwinger to the north , prompted them to violent counterattacks. The Teutonic Order , which he called for help , only became active after it had given him the Kulmerland in the Treaty of Kruschwitz , which then served the order as the starting point for its own state establishment. When the coronation of Przemysław II ended the Polish particularism in 1295 , Mazovia was not there. It was not until 1351 that it became a Polish fiefdom . In 1313 it was divided into three partial duchies with the centers of Płock, Warsaw and Rawa Mazowiecka . The (north) east neighboring Lithuania , which has become a powerful state in the resistance against the Teutonic Order, also undertook military expeditions to Mazovia during its expansion in the 14th century. With the Polish-Lithuanian personal union of 1386, Mazovia lay between the two regions of Poland and Lithuania, which were directly subordinate to the Jagiellonians . After the male line of the Mazovian Piast line died out due to the death of Duke Janusz of Mazovia in 1526, Mazovia fell to the Polish crown and was not given again as a fief.

The territory was directly administratively incorporated into the kingdom and converted into three voivodeships on December 27, 1529 . Since the Prussian Royal Part in the north-west had been under the direct control of the Crown of Poland since the Second Peace of Thorn 60 years earlier, and the rest of the monastic state adjacent to the north and its successor, the Duchy of Prussia , were feudal dependent on Poland, Mazovia was now at the center of Polish power. Accordingly, the Mazovian capital Warsaw quickly became the capital of Poland.

With the third partition of Poland in 1795, almost all of Mazovia fell to the Kingdom of Prussia as the province of New East Prussia until 1807 . During the coalition wars , Mazovia became part of the Grand Duchy of Warsaw from 1807 to 1815 and from 1815, after the Congress of Vienna , formed one of the main provinces of Congress Poland within the borders of the Russian Empire .

In 1918 Mazovia became part of the re-established Polish Republic . Since 1999 the number of Polish voivodeships was reduced, one of the new big ones is the Masovian Voivodeship .

For a long time Mazovia was very sparsely populated. In 1333 only about 55,000 people or 2.2 inhabitants per square kilometer lived in the area. Most of the soils were not very productive. As a result, large areas of the country were covered with forest, while residents migrated to neighboring regions. Aristocratic large estates developed slowly and to a limited extent under these conditions. The population share of the lower nobility (former border guards) was particularly large with approx. 25% of the population, whereby the Polish average of ten percent was already well above the European one. Accordingly, large parts of the Mazovian nobility were impoverished in the 14th to 16th centuries. The legal situation of the farmers, on the other hand, was better than in the rest of the country. The local form of the interest economy was based on the so-called ordo terrae , an individual agreement with the settler ( kmetho ), whereby the settler became the tenant of the land for an unlimited period of time, had extensive personal freedoms and was subject to the regional courts, but not to the dominant jurisdiction. Colonization under German law ( ius Theutonicum ) played a minor role here. An essential feature of the Mazovian rule was that the tradition of the patrimonial monarchy lived on, while the estate constitution developed more slowly than in the areas directly under the Polish crown.

The first founding of cities under German law took place in Mazovia as early as the 13th century (including in Płock). The trade routes leading to the north and south-east played a certain role in the economic development of Mazovia, most of which led north to the cities of Thorn , Danzig and Elbing , all three of which belonged at times to the religious order , then to the Polish Prussian Royal Share .