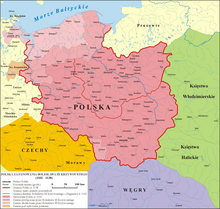 Since Bolesław's older half-brother Zbigniew, with the support of the nobility and episcopate, was chosen as the legitimate successor of the father in 1096, the reputation of Bolesław grew during the ongoing battles between Władysław I Hermans and his palatine Sieciech and the two princes and the aristocratic opposition Father's father received only two provinces ( Silesia and Lesser Poland ), i.e. about a third of the Piast state, in 1102 , while Zbigniew claimed suzerainty due to his rule over the rest of the areas.

Bolesław's campaigns against the pagan-Slavic Pomerania 1102-1106 gave him popularity with the knighthood, who did not like the peaceful policies of Zbigniev. In 1107, with the help of Ruthenians and Hungarians, he succeeded in driving the half-brother out of his share and in ruling all of Poland alone. But when Bolesław invaded Bohemia in 1108 to help his ally King Koloman of Hungary , who was fighting against a German-Bohemian army, Zbigniew found the support of the German Emperor Heinrich V and Duke Svatopluk of Olomouc , who invaded Silesia in 1109 however failed. In order to buy peace and to avoid further armed conflicts with the Holy Roman Empire , Bolesław agreed to pay a tribute of 500 silver marks annually to King Henry. In addition, in 1110 he was ready to enter into an unequal alliance ( amicicia ) with him. At the same time, however, Bolesław took advantage of the battles for the throne that broke out in Bohemia after the assassination of Svatopluk on September 21, 1109 to force the new Duke of Bohemia Vladislav I in 1111 to renounce the tribute (confirmed in the Pentecostal Peace of Glatz in 1137), which the Bohemian dukes Collected annually by Polish rulers for the possession of Silesia since the treaty of 1054.

When Zbigniew returned at this point, Bolesław gave him a few castles as appanage , but had his half-brother blinded as early as 1112 . The general outrage that arose after Zbigniev's imminent death, Bolesław tried to alleviate through pilgrimages to atone for his deed. At Easter 1113 he was accepted back into the church in Gniezno , which enabled him to exercise power again.

Bolesław's peaceful relations with Bohemia and the empire, as well as his marriage to Solomea von Berg-Schelklingen , made it easier for him to expand to the north and north-west. He submitted Pommerellen 1113-1116, he also conquered the by lutizischen tribes inhabited Lebuser country between Oder and Spree back 1115/1119, the Emperor Henry V in his campaign removed from 1109, and it as a fief to the archbishopric of Magdeburg under Archbishop Adalgod of Osterburg had passed. During his campaigns against Pomerania in 1119/21 he devastated the country and then took the Pomeranian capital, Szczecin . The Pomeranian Duke Wartislaw I had to recognize the Polish sovereignty and commit to tribute , military successes and Christianization of his country.

Division of the Piast State

In the vain hope of reducing inheritance disputes, Bolesław III shared. Schiefmund, together with the introduction of the seniority constitution, created the Piast state of Poland under his four sons, which led to the expansion of the area of ​​influence of the Piasts and thus became the most important ruling dynasty in the greater Poland, Kujawy, Silesia and Bohemia area.

Thanks to Bolesław's good relationship with the papacy , the dioceses in Kruszwica , Włocławek and Lebus were founded in 1124 , to which the areas newly incorporated into the Polish state were assigned by the cardinal legate Aegidius von Tusculum .

After the failed attempt by Polish bishops to proselytize the subjugated Pomerania and the greatly reduced population due to the wars, all of whom refused, Pomerania was to be Christianized by a bishop Bernhard from Spain in 1121/1122. This was sent away by the Pomerania and then Bishop Otto von Bamberg came . This was successful on two mission trips (1124/1125 and 1128). The Polish side planned the establishment of a Pomeranian diocese belonging to the Polish ecclesiastical province of Gniezno as early as 1124/1125 and Adalbert, Bolesław's court chaplain, was designated as Bishop of Pomerania. Papal benevolence for the missionary undertakings and Bolesław's good connections to the Babenbergers and Staufers gave reason to hope that this project would soon be realized. But when, after the outbreak of the schism through the double election of 1130, Bolesław and the Polish Church, under the influence of Cardinal Aegidius von Tusculum, sided with Pope Anaclet II , Norbert von Xanten , Archbishop of Magdeburg, renewed the old claims and let himself be Subordinate the diocese of Posen from Pope Innocent II in 1131 and all Polish, including the planned, dioceses in 1133: " Inter Albiam et Oderam: Stetin et Lubus, ultra Oderam vero Pomerana  ..." Bolesław and the Polish bishops then sided with Pope Innocent ' II., Who in 1136 reaffirmed the metropolitan rights of Gniezno over.

Ultimately, the diocese in Pomerania was only founded in Wolin in 1140 , because of the Saxon-Polish contrasts as an exemte , i.e. directly subordinate to the Pope, which was moved to Cammin in 1176 .

Bolesław's good relations with the Babenbergs and Staufers were expressed in 1125 when Bolesław's eldest son, Władysław , married Agnes, the daughter of Margrave Leopold of Austria . Bolesław III. Apparently, however, only Emperor Heinrich V felt personally obliged. When he died in 1125, Bolesław tried to circumvent the homage to Lothar of Supplinburg , but had to make up for it in 1135.

The marriage of his daughter Richeza to Prince Magnus , the heir to the throne and son of King Niels of Denmark , who just then increased his pressure on Rügen , Usedom and Wollin , and the marriage of another daughter to Konrad were also part of the realization of Bolesław's interests in Pomerania Count of Plötzkau , 1132, 1130 with the Saxon Nordmark invested was.

Bolesław's careless intervention in the Hungarian throne disputes in 1132 involved Poland in wars with the Kingdom of Hungary and Bohemia, whose ruler was Emperor Lothar III in 1134. elected as referee. In this situation Bolesław was forced to pay homage to the emperor for Rügen , which he had not yet subjugated, and to pay homage to Pomerania at the court assembly in Merseburg in 1135 , in order to recognize the imperial suzerainty for these areas and to pay the backward tribute of twelve years that he was after had ceased to pay the death of Emperor Heinrich V in 1125, since he perhaps viewed it only as a personal obligation to Heinrich. He also committed to making peace agreements with Hungary and Bohemia.

Bolesław successor order, which was to secure national unity, the respective senior , based in Cracow the principality , the sovereignty should exercise all other members of the Piastenhauses proved soon after Bolesław's death in 1138 as ineffective and led the to 1295 ending period of the Polish principalities .

2. Marriage in 1115 with Salomea , daughter of Heinrich, Count von Berg-Schelklingen: