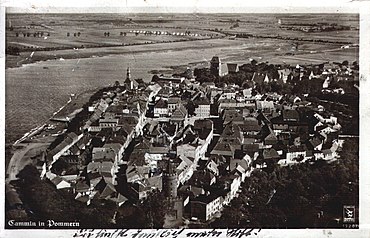 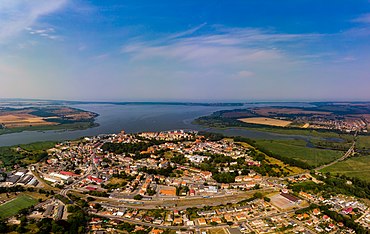 Kamień Pomorski [ ˈkamʲɛɲ pɔˈmɔrski ] Pronunciation ? / i , German Cammin in Pomerania (abbreviated Cammin i. Pom. , also Kammin ), is a city in Poland's northwestern West Pomeranian Voivodeship . It is the seat of the Powiat Kamieński . The city is a state-approved health resort.

The city is located in the northwest of the West Pomeranian Voivodeship in Hinterpommern on the Zalew Kamieński (Camminer Bodden), a bulge of the Dziwna (Dievenow) which flows into the Baltic Sea . The height of the city above sea level is 17 m. It is 10 km to the Baltic Sea and the seaside resort of Dziwno (Klein Berg), and about 70 km to Stettin .

From the origins in the 12th to the 16th century

In 1107 a Slavic rampart of the Wends was mentioned. When at the beginning of the 12th century the Polish Duke Bolesław III. Wrymouth conquered Pomerania in order to Christianize it, for this purpose he brought Bishop Otto von Bamberg into the country. In this context, Cammin was mentioned in 1124 when Otto stayed there in June to baptize the Slavs . In 1128 Otto undertook with the support of the later Roman-German Emperor Lothar III. another mission trip to Pomerania, during which he was again in Cammin. The Pomeranian Duke Wartislaw I , who ruled between 1121 and 1135, had his residence in Cammin - the place was the first known seat of a Pomeranian duke. In connection with the establishment of the Stolpe Monastery , Bishop Adelbertus von Cammin was named as its ordinator in 1153 .

The diocese of Cammin was only officially founded after the subjugation of Western Pomerania by Heinrich the Lion in 1175 with Bishop Konrad I. von Salzwedel. At this time, Duke Casimir I had the St. John's Cathedral built. Brandenburg troops destroyed the village in 1273, the castle was a year later, with the participation of German immigrants settled west rebuilt and in 1274 the Pomeranian Duke Barnim I the Lubeck city rights conferred. The German immigrants repopulated the Ratswiek, the former Wendish settlement. In 1308 the city including the cathedral was partially destroyed as a result of armed conflicts between the Margrave Waldemar of Brandenburg and Duke Bogislaw of Pommern-Wolgast ; Waldemar the Great reimbursed the damage caused to Bishop Heinrich von Wacholz from Cammin in 1309. The dukes Otto I , Barnim III. and Wartislaw IV. , ruler of Pomerania-Wolgast, sold the city on August 16, 1321 for 8,000 marks to the Cammin bishop Konrad IV. In the fight against the marauding robber barons and looters in the country, Cammin became a member of the defensive alliance of East Pomeranian cities against "Schinder , Robbers and Bodenstülper ”. In 1418 Pomeranian Duke Bogislaw VIII was buried in Cammin. After the Reformation was introduced in Pomerania in 1535, the Szczecin Chancellor Bartholomäus Suawe became the first Protestant bishop in 1545 . From 1556 the Pomeranian dukes administered the diocese of Cammin until it fell to Kurbrandenburg in 1648 as a secular imperial principality.

After the Thirty Years War , Cammin came to Swedish Pomerania . In 1679 Brandenburg received it in the Peace of Saint-Germain . In 1650 the last titular bishop of Cammin, Duke Ernst Bogislaw von Croy , waived his rights to the diocese in exchange for a settlement in favor of the elector Friedrich Wilhelm von Brandenburg . When Cammin was freed from the so-called Sundzoll at the beginning of the 18th century , many merchants from Lübeck , Rostock and Stralsund settled in the city.

After the Congress of Vienna , Cammin belonged to the Prussian province of Pomerania and in 1818 became the district town of the Cammin district . On August 5, 1845, the first issue of the Camminer Kreiszeitung , a weekly newspaper for the entire district, appeared. It had the format 18 × 20 cm (W × H) and was published and printed by the publishing house GA Domine & Co., which had been founded in Cammin in 1840 and which operated a bookstore and a lending library at the same time. As of April 1848, the company HL Behrendt & Co., which also ran a bookstore, took over the editing, printing and publishing. Behrendt received permission to rename the paper from April 1, 1848 to Allgemeine Pommersche Zeitung . After that, other local newspapers appeared in Cammin.

In 1848 four merchant ships were at home in the port of Cammin.

From 1876 to 1913, Cammin was a stronghold of the German Conservative Party in the elections for the Prussian House of Representatives and the Reichstag (German Empire) , which often received more than half of the votes.

Due to a brine spring discovered in 1882 and a neighboring moor , Cammin became a health resort in 1882. Bathhouses and accommodations emerged. The salt spring was 600 m deep, had a salt content of 4.5% and a temperature of 20 ° C. The spa buildings survived the Second World War and the spa operations continued in 2010.

Around 1900 there were four Protestant churches in Cammin, a synagogue , a secondary school with private upper classes (housed in the cathedral school), a teachers' seminar, a noble fräuleinstift, hospitals, the brine and mud bath, an iron foundry, a machine factory, a dye works, one Dachstein factory, a cement goods factory, a beer brewery, cattle markets, shipping companies, fish trade and other businesses. Cammin was the seat of the district office, a district court and a tax and customs office.

Around 1900 Cammin got a power station in Feldstrasse, where direct current generators produced the electricity. Later, the residents obtained their electricity from the Märkisches Elektrizitätswerk, with the transmission to the city network via converters and with the help of rectifiers . In 1902 a slaughterhouse was opened; in 1927, for example, 460 slaughterings took place there. In 1905 a water works with a water tower was put into operation, which in 1927 had an annual output of 106,500 cubic meters. In 1905 a river bathing establishment was also opened on the Dievenow. In 1910 the sewer system was expanded and a sewage treatment plant was put into operation, which worked according to the biological precipitation process . In 1927 the street lighting consisted of 96 electric lamps.

On the Dievenow (Bodden) the city had a port with a bulwark 450 m in length. In 1927, 165 incoming and 136 outgoing ships were counted there, with a handling of 8,626 tons of cargo. Ocean-going ships could not call at the port because of the insufficient depth of the Dievenow estuary.

During the Reichspogromnacht , supporters of National Socialism looted Jewish shops and partially destroyed them. The synagogue was 'Aryanised' and has served as a residential building ever since. The Jewish cemetery survived the Nazi era, but was leveled in the early 1960s and converted into a green area. On March 31, 2008, the community unveiled a memorial stone in memory of the cemetery after a plaque was destroyed just days after it was installed in June 1996.

During the Second World War , evacuees from the current twin town of Lünen (Westphalia) were quartered in Cammin . Towards the end of the war, heavy fighting took place on March 5 and 6, 1945 on the Dievenow and in Cammin. 60 percent of the city center of Cammin was destroyed. Then the Red Army occupied the city. After the end of the war, Cammin came under Polish administration together with all of Western Pomerania. If they had not already fled, the new Polish administration expropriated the entire local population; later expelled or relocated. On the morning of June 23, 1945, about 1,200 people were taken out of their homes by the Poles in a surprise action, driven to a meeting point on Camminer Damm at the Soltin / Grabow intersection and from there on foot via Fritzow and Dievenow to the airfield Brought Dievenow. Only hand luggage was allowed. From there, the trek continued via Misdroy , Swinoujscie , Wolgast and Züssow to the city and the district of Anklam, where the main part arrived on July 5, 1945.

Cammin was given the Polish name Kamień Pomorski , and new settlers were added. The new settlers were partly so-called Bug Poles, who came from the areas east of the Curzon Line annexed by the Soviet Union , especially from today's Lithuania , and partly resettlers from central Poland. The city received a training center for the Polish Navy . In the 1960s, the administration had some of the destroyed buildings rebuilt and new housing estates built. At least 21 people, including six children, were killed in a fire in a homeless shelter on April 13, 2009. 21 people were injured. 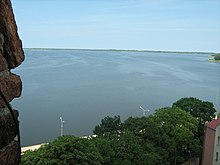 Town hall, back; left in the background the Camminer Bodden 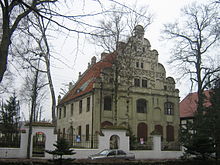 The well-preserved and well-sounding organ is regularly used for organ concerts . The organ case from 1669 comes from Michael Birgel. 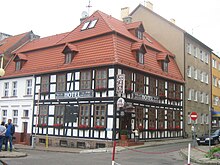 Half-timbered house on the market square 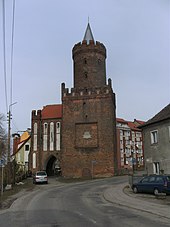 The Königsstein lies on the northern bank of the island of Gristow , which belongs to Cammin . The boulder has a circumference of 20 m and is the fifth largest boulder in Poland.

Gmina Kamień Pomorski is an urban-and-rural parish . Belong to her

In 1892 Cammin was given a rail link to Stettin. Today the city has a local train station on the Wysoka Kamieńska – Trzebiatów railway line , which ends here. A bus station is adjacent to it. Between this bus and the bus station in Świnoujście ( Swinemiinde ), which is located on the east side of the port next to the pier of Bielek-car ferry, oscillate public buses that the distance along the seashore (road 102) via the localities Międzyzdroje ( Misdroy ) Take Kołczewo ( Kolzow ), Miedzywodzie ( Heidebrink ), Dziwnowek ( Dievenow Forest ) and Dziwnów ( Dievenow ). Kamień Pomorski can also be reached by bus from Goleniów ( Gollnow ).

Other people associated with Cammin

Towns and municipalities in the Kamieński Powiat (Cammin District)