The city is located in the Puszcza Goleniowska ( Gollnower Bürgerheide ) on the river Ina ( Ihna ) in Western Pomerania . It is located about 20 km north of Stettin ( Szczecin ), 10 km east of the dam's lake ( Dąbie ) and 50 km south of Kamien Pomorski ( Cammin ).

Gollnow an der Ihna , southeast of the Szczecin Lagoon on a map from 1905. 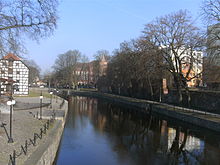 View of part of the historic city center. On the right is the preserved part of the medieval city wall

Medieval city wall with the round fangel tower and the octagonal mint tower .

Wollin Gate from the 15th century. 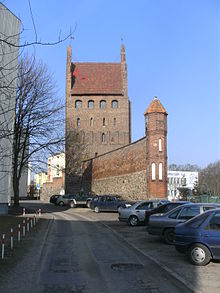 As early as the 10th century there were first settlements in the area of ​​today's city. The first Saxon colonists came around 1190. 1268 of the Pomeranian Duke gave Barnim I the hitherto Vredeheide said place the Magdeburg Rights , as adapted by him Szczecin form. The city was named Gollnow in reference to the Golinogheide that surrounds it. In 1314 Duke Otto I changed the town charter to the Luebian law . As early as the 14th century there was a school in Gollnow, where Latin could apparently also be learned. Occasionally, students from Gollnow appeared at the University of Prague from the 14th century , later also in Erfurt , Leipzig and Rostock .

By this time Gollnow was already a member of the Hanseatic League and was granted duty exemption for the Ihna and Peene rivers in 1339 to promote its trade . Since the city was on the lower reaches of the Ihna, it could control the whole river. For example, the city of Stargard, 20 kilometers upstream, had to buy free passage for a lot of money. Thanks to these favorable circumstances, Gollnow achieved considerable wealth. The importance of the city was confirmed in the right to mint coins granted in 1383 . Grain, timber and salt trade were the dominant economic factors until well into the 18th century.

During the Swedish rule from 1630 to 1720, the economy experienced a significant decline. Around 1684 a dispute between the cities of Szczecin, Stargard and Gollnow had to be settled over shipping rights.

With the Treaty of Stockholm Gollnow came to Prussia in 1720 . From 1733 to 1755 Gollnow was the garrison of the Dragoon Regiment 5 "Bayreuth" .

With the introduction of the Prussian administrative reform after the Congress of Vienna in 1815, the city was incorporated into the Naugard district (from 1818). Economic life flourished again when Gollnow was connected to the railway lines of the Altdamm-Colberger Railway Company to Kolberg and Kammin in 1882 and 1892 . This increased the population from 1850 to 1890 by 60% to 8,000. From 1833 to 1849 the city was garrison for the Colbergsche Grenadier Regiment Graf Gneisenau (2nd Pomeranian) No. 9 and later for a division of field artillery No. 2.

Economic life was dominated by industrial companies involved in textile and paper production and wood processing, in particular the furniture manufacturer WILAGO founded by Willi Laabs in 1913.

Towards the end of the Second World War , the Red Army occupied the region in the spring of 1945 . Large parts of the city were destroyed in the course of the fighting. Only a few older buildings have survived from the pre-war period, including the Church of St. Catherine , the town hall and the post office. Soon after the occupation by the Red Army, the city was placed under Polish administration. In 1946 the German city of Gollnow was renamed Goleniów . If the inhabitants had not fled, they were later expelled by the local Polish administrative authorities or later resettled and replaced by Poles.

Stalls on the market on the Ihna (near the old post office).

On the Ina , not far from the old post office, the townspeople have a spacious market area with numerous stalls where traders offer fresh fruit and vegetables, groceries, household goods and cheap goods such as clothing and shoes on weekdays.

A subsidiary of the wind turbine manufacturer Volkswind is located in the village . 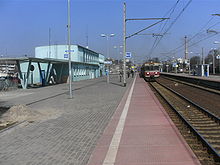 Station seen from the southwest.

State road 3 ( Droga krajowa 3 ) leads through Goleniów from Świnoujście ( Swinoujscie ) to Stettin ( Szczecin ), which follows the former state road 111 up to here . North of the city, Droga krajowa 6 (former R2 ) branches off in the direction of Nowogard (and on to Koszalin ), which is to be expanded into the Droga ekspresowa S6 expressway in the future .

Stettin-Goleniów Airport is located to the northeast, about five kilometers away .

The urban and rural community of Goleniów is divided into the following districts ( sołectwo ) in addition to the main town of the same name :

Parishes in the powiat Goleniowski