The title of this article is ambiguous. Further meanings are listed under Stargard (disambiguation) .

Stargard , from 1950 to 2015 Stargard Szczeciński [ ˈstarɡart ʂʈ͡ʂɛˈʨiɲskii ] ( German Stargard in Pomerania ) is a town with the seat of a rural community of the same name in the Polish West Pomeranian Voivodeship and is part of the Agglomeration of Szczecin .

Stargard northeast of Madüsees ( Madüe Lake ) on a map of 1905

Stargard by the 15th longitude (meridian) runs, so that here the true time of the Central European time corresponds.

The city is divided into the following districts:

In the extreme southwest of the city area lies the Hufenitz desert . 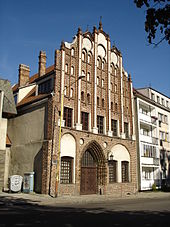 Stargard is one of the oldest Pomeranian cities, a "castrum Stargord" is mentioned as early as 1140 (Slavic stari gord , which means old castle or old town). The location of the Slavic castle has not been determined. In the 8th century, the Slavic settlement of Osetno developed a few kilometers south of today's city center . In their neighborhood, a new village was created by the immigration of German settlers , which, from 1229 onwards, was provided with a defense system with three towers and four gates. The Pomeranian Duke Barnim I granted it Magdeburg city rights in 1243 or 1253 . His successor Bogislaw IV granted the city free shipping over the Ihna to the Baltic Sea in 1294 as compensation for the castle that was destroyed by the Poles.

When in 1295 the Duchy of Pomerania was divided and Stargard came to Pommern-Wolgast, the town was given the town charter that prevailed there . On June 8, 1372 the partition contract of Pomerania-Wolgast by the dukes Wartislaw VI was in Stargard. and Bogislaw VI. closed. Stargard himself had come under the rule of Pomerania-Stettin.

The city, which had developed into an important trading center, had already joined the Hanseatic League in 1363 . The main trade was in grain. This led to disputes with Szczecin, which escalated to such an extent in 1428 that Stargard was attacked and plundered by Szczecin irregulars. The Pomeranian Dukes Bogislaw VIII and his son Bogislaw IX. made Stargard their residence in the first half of the 15th century. In 1524 Johannes Knipstro initiated the Reformation in Stargard . In 1633 the Protestant college Collegium Groeningianum was opened. During the Thirty Years War , the city's prosperity diminished due to alternating occupations and battles between the imperial and the Swedes.

In 1635 large parts of the city were destroyed in a major fire. The Gröning Collegium also burned down. After the Pomeranian ducal house died out, Stargard came to Brandenburg in 1648 through the Peace of Westphalia with Western Pomerania . 33 years after its destruction, the Gröning Collegium was rebuilt under Elector Friedrich Wilhelm and reopened in 1668. Stargard became the capital of Western Pomerania, but had serious disadvantages in trade because of the tariffs that Sweden levied at the confluence of the Ihna in the Oder. In 1657 Stargard was caught between the lines of the Polish-Swedish War , soldiers from both sides marched through the city.

Around 1670 there was an immigration of Huguenots from France . As a result of the population growth, the city grew beyond its medieval core, and the Friedrich-Wilhelm-, Luise- and Jobstvorstadt emerged. The disadvantages of the transition of the capital city function to Stettin after the annexation of Old Western Pomerania by Prussia in 1720 could not be compensated by the now free access to the Oder. In 1791, 5,912 people lived in Stargard, including 243 Jews. The Jewish population in Stargard was around four percent and was on average three times higher than in other cities in Western Pomerania.

During the French occupation of Szczecin from 1806 to 1814, the seat of the Pomeranian government was temporarily moved back to Stargard under Blücher as military governor.

Monument to Kaiser Wilhelm I
(destroyed in 1945)

On the occasion of the reorganization of the territorial administration, the Prussian government elevated Stargard to the district seat of the Saatzig district in the province of Pomerania in 1818 . In 1846 the city was connected to the Stettin – Posen railway, which was completed in 1848, and in 1859 the railway repair shop went into operation. In the summer of 1866, when Stargard had around 16,500 residents, around 500 people died here from the cholera epidemic that broke out in southern and western Europe. To make room for the expanding economy, the city wall was largely demolished in 1869. At the end of the century, a high-performance industry had established itself, which included machine, lacquer and roofing felt plants. In addition, the Provincial Fruit Nursery had established itself. There were monthly cattle and horse markets and once a year a canvas market. At the beginning of the 20th century, Stargard was the seat of a district court and a district administration and had a grammar school, a secondary school and an agricultural winter school. After the population had risen to over 25,000, the city was granted independent status on April 1, 1901, but retained the district office for the Saatzig district.

When, after the First World War, many residents of the Prussian provinces West Prussia and Posen , which had been lost to Poland, moved in, Stargard was significantly expanded with new settlements on the periphery during the tenure of Mayor Albert Kolbe .

Until 1945 the city of Stargard belonged to the administrative district of Stettin in the Prussian province of Pomerania of the German Empire .

Towards the end of the Second World War , the city of Stargard was 70 percent destroyed by Soviet bombing between March 1 and 3, 1945 . On March 4, 1945 it was occupied by the Red Army . In the summer of 1945 the Soviet Union placed Stargard together with the whole of Western Pomerania under the administration of the People's Republic of Poland . The place name Stargard Szczeciński has now been introduced. In the following period, the gradual immigration of Polish migrants began, some of whom came from areas east of the Curzon Line that had fallen to the Soviet Union and where they had belonged to the Polish minority. The native population of Stargard was driven westward via the Oder by the local Polish administration .

In the post-war period, the city was rebuilt and the main monuments, such as the town hall, were restored. With effect from January 1, 2016, the name of the city was changed back to Stargard .

The city of Stargard covers an area of ​​48 km² with around 70,000 inhabitants today. In addition to the city, this also includes the village of Kluczewo (Klützow) .

A commercial area was set up on a military airfield operated until 1992 . Resident companies include a. the Japanese company Bridgestone and the Finnish company Cargotec .

The majority of the population of Stargard was Protestant from the Reformation until the end of the war in 1945. At the beginning of the 20th century Stargard had four Protestant churches, a Catholic church and a synagogue .

The Poles who immigrated after the end of the war in 1945 belonged to the Roman Catholic Polish Church.

In Stargard the cross country roads 10 ( droga krajowa 10 ) of Szczecin by Bydgoszcz and 20 of Stargard to Danzig . Road 10 is a bypass road in the Stargard area as the S10 expressway .

The place is a railway junction. The city's train station is on the Poznań – Szczecin (Posen – Stettin) railway , is the end point of the Gdańsk – Stargard (Danzig – Stargard) railway and was the starting point for the meter-gauge Saatziger small railways .

Despite the heavy destruction in the Second World War and the subsequent reconstruction, which was limited to the city's landmarks and otherwise destroyed the historic structure of the old town with appropriate block development on a new road network, numerous architectural monuments of the brick Gothic are still reminiscent of the architecture of the old Hanseatic city.

The Museum of Archeology and History is the only museum in Stargard and is located on the Old Town Square.

Until 1998 the international service of the Polish radio operated a transmission system for medium wave at 15 ° 7 'east longitude and 53 ° 18' north latitude (transmission frequency: 1503 kHz, transmission power: 300 kW). The two antenna masts of the system have now been dismantled.

At the head of the city administration is the city ​​president . Since 2017, when he was elected to succeed the late long-time incumbent Sławomir Pajor, this has been Rafał Zając, who has his own electoral committee supported by the Stargard XXI Association, the Stargard County League, Nowoczesna and "Solidarność" West Pomerania , starts. The regular election in October 2018 led to the following results:

Zając was thus re-elected for a further term in the first ballot.

Stargard is a member of the Neue Hanse .

Towns and municipalities in the powiat Stargardzki (Stargard district)